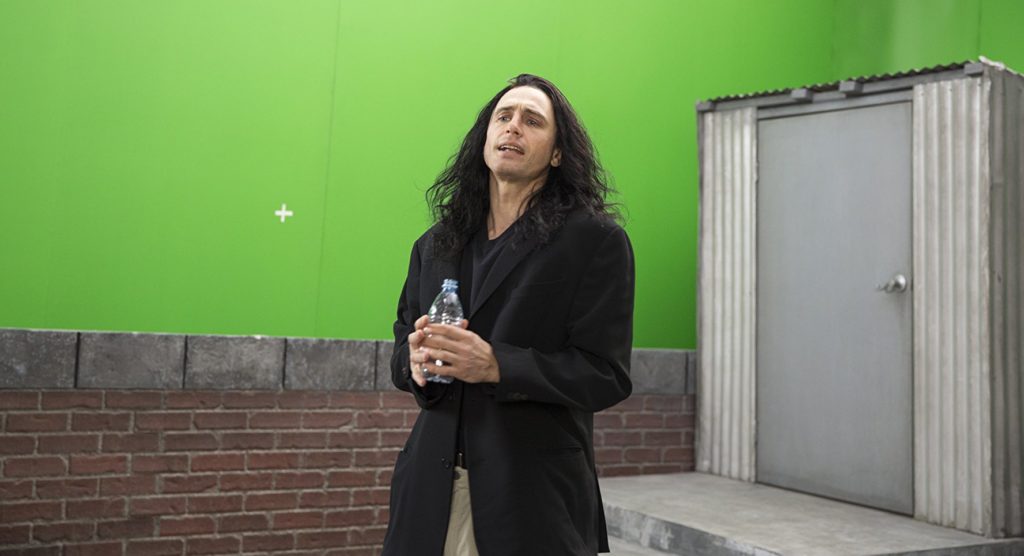 Like many post-millennial cult movie fans, I have a long, fond history with Tommy Wiseau’s anti-masterpiece The Room. Not being based in New York or LA, I heard rumblings of the film’s legend long before I got a chance to see it, but even reading articles, I had trouble grasping what exactly it was— which is understandable, because, as anyone who’s ever seen The Room knows, its mystique is nearly impossible to describe. When it finally made it to Boston, thanks to the tireless midnight staff of the Coolidge Corner Theatre, I immediately fell in… well, “love” is maybe not the right word, so much as “fixation.” The Room more or less was my summer of 2009; my friends and I would attend each month’s screening, volunteer afterwards to sweep up the plastic spoons hurled by the audience, then bring them back the following month to throw ourselves. Over time, we got to see the phenomenon evolve, as more and more people learned of this strange little delight, memorizing the canonized call-and-response and, month by month, adding their own.

By the fall, however, The Room’s exposure hit a sort of tipping point. I recall in particular a screening, perhaps in November, where everything seemed just a little bit… off. People were shouting, but it wasn’t clear whether they were actually interacting with the movie, or simply enjoyed shouting in a crowded theater (mystifyingly, the people seated next to us spent most of the time screaming about Battletoads). About ten minutes in, my friends and I decided we had enough, and asked the theater staff if we could jump ship to the movie playing in the downstairs theater (that movie, incidentally, was Michael Jai White’s delightful Black Dynamite, making our decision all the wiser). In retrospect, I can’t help but sense that our disappointment was rooted in an elitist disdain for the masses who didn’t “get” it, but in truth we were all just run down. What had once been freewheeling fun had simply become dark, weird, and exhausting.

Thinking back on my experience with The Room, it occurs to me that it serves as a microcosm of that of Greg Sestero, Wiseau’s long-suffering leading man/roommate/handler/Sancho Panza. Following several years of bemusedly touring The Room before midnight audiences with Wiseau (who embraced the attention, blithely insisting that his clearly personal story was a “dark comedy” all along), Sestero finally wrote his essential tell-all memoir, The Disaster Artist, in 2014, which now serves as the basis of James Franco’s film adaptation of the same name. Like Sestero’s book, Franco’s film doesn’t shy away from the enervating, borderline-malevolent presence of its subject, or the toxic effect he has on those around him. Also like Sestero’s book, though– and Wiseau’s film, for that matter– it’s a hell of a lot of fun in spite of itself. 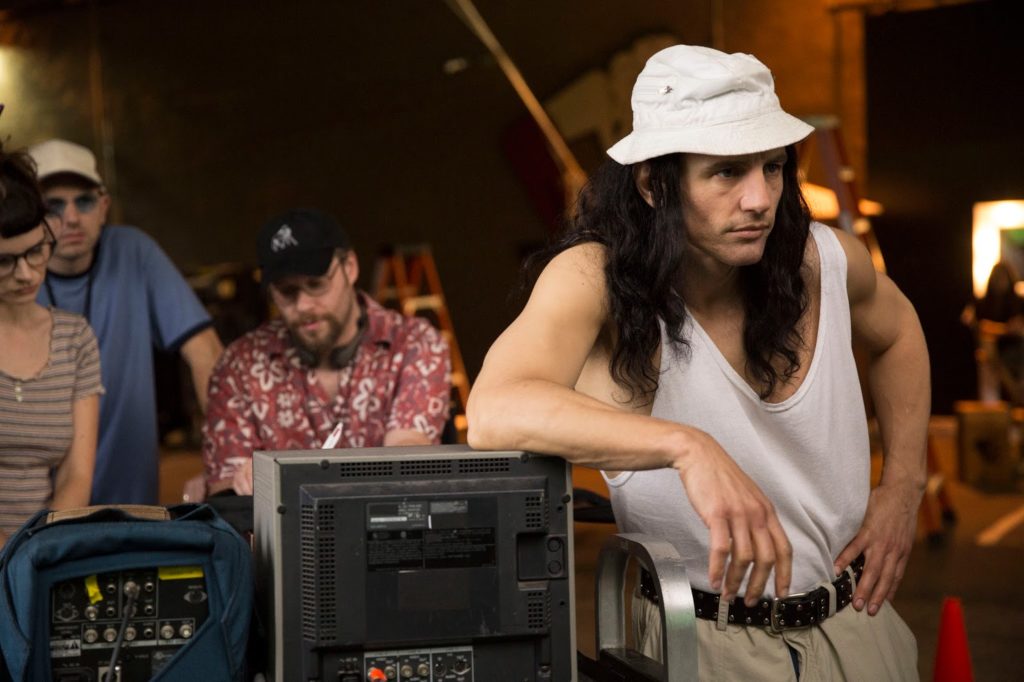 For those who have somehow made it through three paragraphs without knowing what the hell I’m talking about, The Disaster Artist details the production of The Room, widely considered among the worst films ever made, through the eyes of Sestero (played with doofy earnestness by Dave Franco, the director’s brother). Struggling his way through an acting class (taught by Melanie Griffith, in the first of a dizzying parade of mostly straightfaced cameos), he becomes captivated by a classmate by the name of Tommy Wiseau (James Franco, nailing the accent and looking as much like Wiseau as a photogenic Hollywood actor can look). With his stringy hair, Michael Jackson jacket, and pointedly ambiguous age, nationality, sexuality, and income, Wiseau possesses the confidence which Sestero so sorely lacks. When we first meet Wiseau, he swaggers to the front of the class and, without briefing his scene partner, launches into the infamous “Stella!” scene from A Streetcar Named Desire. Wiseau doesn’t interact with his partner, and he clearly hasn’t learned any of the lines beyond “Stella”– and mostly slurs that one word– but he nevertheless captivates the class with his intensity and gonzo charisma. Sestero approaches Wiseau to do a scene together, and the two embark on a whirlwind bromance, taking a spontaneous road trip to the site of James Dean’s death and ultimately moving in together in Wiseau’s spare apartment in Los Angeles. The plan, they pinky-swear, is to make it big as actors.

With his prettyboy looks (Wiseau dubs him “Babyface,” which becomes creepier with each iteration), Sestero finds initial success fairly quickly, landing an agent and scoring a handful of auditions. Wiseau, meanwhile, struggles, his unconventional looks and lack of talent compounded by his lack of familiarity with social norms. At one point, he accosts a Hollywood producer at a fancy restaurant (Judd Apatow, ambiguously playing himself), who flatly tells him, “It’s not gonna happen to you.” A different acting coach (Bob Odenkirk) is more tactful, suggesting Wiseau could find success playing villains– Dracula, or perhaps Caliban– but Wiseau balks, insisting that he’s leading man material. Dejected, Wiseau finds himself on the brink, before Sestero literally talks him off the edge by inadvertently offering the solution: Why not make his own movie?

It is at this point that the movie hits its stride, offering what the audience is there to see. Once Wiseau has his script down on paper (“Wow! You… did it!” Sestero flailingly offers upon reading it), the production takes off surprisingly quickly– Wiseau’s cash reserves are seemingly bottomless, and allow him to amass a crew and an impressive array of equipment (which he buys outright, against industry standards and common sense). Once photography commences, however, Wiseau’s lack of understanding shows through: he bellows dictatorial demands of his cast and crew, while struggling to remember the simplest passages of his own dialogue. As the shoot drags on (in an amusing running gag, onscreen titles begin “Day 1 of 40,” and continue well into the sixties), the cast devolve into hysterics, the crew teeters closer to mutiny, and Wiseau’s relationship with Sestero becomes more and more strained and toxic. 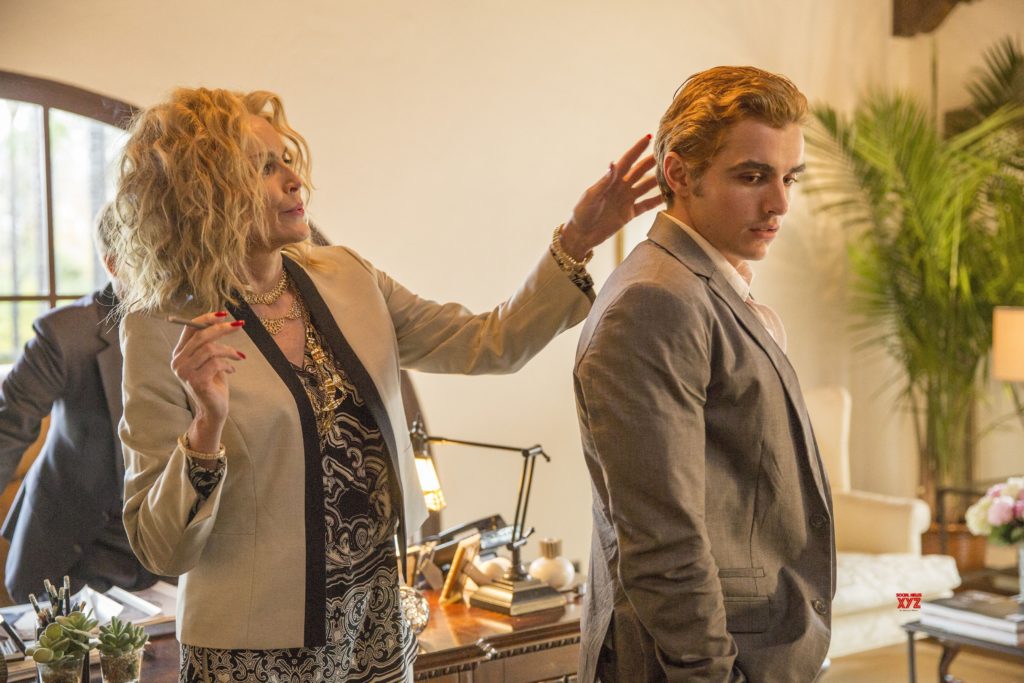 In a sense, Franco had an easy job in bringing this story to the screen. It’s an inherently amusing story centered on a hilariously weird character, already spun into a cohesive narrative in Sestero’s book. It’s commendable, however, how effortlessly he stages the film as a comedy in its own right. The cast is packed with comedic ringers, many of whom have gone on record singing The Room’s praises; standouts include Seth Rogen as perpetually exasperated script supervisor Sandy Shklair, and a scene-stealing Zac Efron as Dan “Chris-R” Janjigian. While some scenes have been augmented for dramatic effect, many seemingly perfectly constructed comedy scenes in fact spring more or less directly from Sestero’s firsthand account. Even Room obsessives who have read the book multiple times should find themselves laughing anew; the material is gold, and and handled masterfully.

But the heart The Disaster Artist, like The Room itself, rests on the slumping, weirdly muscular shoulders of Tommy Wiseau. While it would probably be impossible for anyone short of Rick Baker to make Franco entirely resemble the auteur’s physical visage, and he doesn’t quite nail Wiseau’s dead-eyed leer, Franco otherwise perfectly inhabits his muse. On screen, on the page, and in life, Wiseau is a fascinatingly strange character. Even beyond the mysteries of his origins (to which the movie professes ignorance, but which Sestero pieces together a semi-plausible version of in his book, and documentarian Rick Harper has filled in some gaps), he is a man of contradictions, his endearing enthusiasm running up against his repellant treatment of other people. As Wiseau, Franco is consistently hilarious in both modes, while also turning him into a somewhat tragic figure– you root for him to succeed even as you want to strangle him. There is already talk of Franco being nominated for a Best Actor Oscar. I’ll get back to that prospect in a moment, but suffice to say it would not be unwarranted. 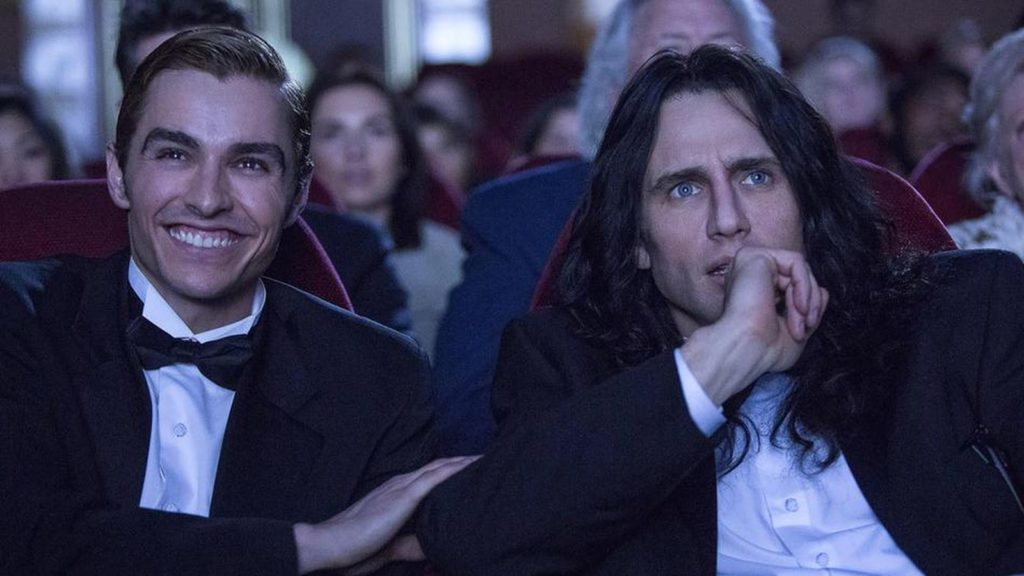 I generally try to focus on my own reaction to a film rather than a hypothetical other, but as I watched The Disaster Artist, I found myself repeatedly wondering how it would play to two different audiences. The first are those who haven’t seen, or even heard of, The Room; I know few people who would fall into this category, but I have to imagine they make up the majority of America. Franco seems to be aware of this, beginning the film with a series of “testimonials” by such high-profile fans as Kristen Bell and JJ Abrams, and closing with a lengthy split-screen sequence comparing original scenes from The Room with his cast’s reenactments. While I imagine this audience may be somewhat mystified by some specific nods (such as the wardrobe assistant questioning Wiseau’s multiple belts, or the question “Can I just call him ‘Chris?’”), I suspect they shouldn’t have too much trouble getting into the spirit. Like Tim Burton’s Ed Wood (with which The Disaster Artist shares a good amount of DNA), the presentation is engaging enough that it will likely create a legion of new badfilm connoisseurs.

The other audience I found myself contemplating is Wiseau himself. It seems worth noting that Franco got his start playing James Dean in a TV biopic. In any other case, this would be a fun meta-moment, but I couldn’t stop wondering what this fact could be doing to a cracked psyche like Wiseau’s. One might make a case that The Room’s following amounts to sideshow exploitation of a clearly unstable individual. I’m not overly concerned about that in Wiseau’s case– he wanted fame, and he got it, and he clearly relishes the spotlight however it comes– but I can’t imagine what it’s like to be near him at this moment in time. If Franco does get nominated, it’s wholly plausible– likely, even– that he will bring along Tommy as his date. That will be worth tuning in for.

This possibility speaks to the film’s ultimate “message”: Tommy Wiseau didn’t make a great film, or even a passable film, but, against all odds and logic, he made a film. What’s more, he made a film which is, in its own way, as cherished as any in the past fifteen years. By the film’s climactic premiere, you will find yourself on Tommy’s side, even though you’ve literally been among those laughing at his vision. Franco’s film– and Sestero’s book, and really the very existence of the Room cult– argues that this is not necessarily a contradiction, that earnest enjoyment and ironic appreciation don’t have to be mutually exclusive. Like the complicated relationship between Sestero and Wiseau (both in the film and in life), we can love something while fully acknowledging its faults. It is– to turn a phrase– quite a story, Mark.