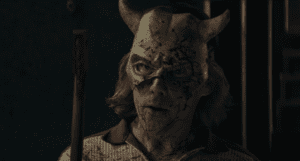 The Black Phone opens in a northern suburb of Denver, Colorado, in 1978. The town is plagued by a child kidnapper and killer. Black clouds bubble like an infected boil across the gray sky as Finney (Mason Thames) and Gwen Shaw (Madeleine McGraw) walk home from school on a grubby, chain link fence-enclosed sidewalk. Tattered, weathered “missing” posters line the block as the siblings worriedly look at their vanished former classmates, made forever young in black and white. “It’s him, isn’t it?” Gwen breaks the uncomfortable silence between them. “The Grabber.”

Finney Shaw is a shy, kind, quiet kid. He plays baseball, excels at school, and is a tolerant son to his punchable, alcoholic father (Jeremy Davies). Finney is a great brother to the second-sight sensitive Gwen but is the frequent target of schoolyard bullies. “One day,” friend and defender Robin Arellano (Miguel Cazarez Mora) warns Finney, “You’re going to have to stand up for yourself.”

Robin’s warning comes true when Finney is cornered coming home from school by Gwen’s aforementioned “Grabber,” a creepy, nearly unrecognizable Ethan Hawke, clad in white face paint, Dahmer-style sunglasses, and a black top hat. He grins, asking Finney if he wants to see a magic trick. Finney uneasily notices a heap of black balloons in the back of Hawke’s pitch-black van—the rumored calling card of The Grabber. Before Finney can say another word, The Grabber knocks him unconscious and shoves him through the back doors. 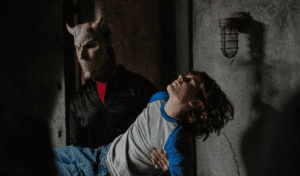 ETHAN HAWKE (LEFT) AS THE GRABBER IN “THE BLACK PHONE.”

Finney wakes in an all-concrete basement, furnished with a dirty, blood-stained mattress, rancid toilet, and a few junky spare rugs. And, of course, a crummy old wall-mounted rotary phone that’s disconnected but still rings. Despite the Grabber barking at Finney that the phone doesn’t work and to hang it up, it rings when he’s alone. The ghostly voices of the Grabber’s previous victims slither through the static, encouraging Finney to succeed in their past failed attempts to survive.

The Black Phone is, above all things, a brilliant watch. It’s a good, old-fashioned entertaining movie that made me—along with my friend and the rest of the theater—cheer at the screen. At least for me, that hasn’t happened in ages.

I normally try my hardest to not connect Joe Hill with his father, Stephen King—the two men are accomplished writers in their own right—but I’d feel ignorant to not point out King’s influence here. There are little hints sprinkled throughout, with the horror of It (Gwen’s yellow rain slicker, dead kids), the supernatural elements of The Shining (Gwen’s second sight, à la Danny Torrance), and the tear-inducing dialogue of Stand By Me (Finney’s connection with Robin echoes that of Chris and Gordie). Derrickson ties these elements neatly together with his own brilliantly eerie influence, noted in the actors he chooses, his gritty cinematography, and the film’s chilling score. Hawke and James Ransone (who perfectly plays the Grabber’s clueless, coked-out brother, Max) even have a small Sinister reunion.

MASON THAMES (LEFT) AS FINNEY SHAW IN “THE BLACK PHONE.”

Hawke goes completely against his typical roles here, and I want to see more of it from him. His voice completely changes to this high-pitched, shaky, nightmarish sound that makes you physically recoil in your seat when he speaks. His entire demeanor is so expertly executed that he truly transforms into another person—this hulking, pedophilic monster behind a mask (again, I see you, Scott Derrickson, with your Bughuul reference) with a pension for slaughtering young boys. While walking out of the theater, I turned to my friend, and said, “Honestly, I never thought I’d cheer on someone for beating up Ethan Hawke.”

Without spoiling, I want to point out the tenderness between Thames and Cazarez Mora. These two talented young actors brought me to tears in the final act of the film, and I can’t wait to see where they go next. The same goes for McGraw—her snappy, precocious attitude is carefully blended with her innocence and caring nature, creating a truly lovable character in Gwen.

That being said, The Black Phone isn’t without faults. My biggest gripe comes in the form of plot holes. Despite having previously read Hill’s short story, I wanted to know so much more in the film’s narrative than what we were given in the literature. Who is The Grabber, and why is he doing this? Why does he get teary-eyed when he speaks to Finney? Why can Finney hear The Black Phone? Why can The Grabber also hear The Black Phone? How does it play a bigger part in the film’s focus on “second sight”—if at all?

The Black Phone, despite its minor plot missteps, is the horror movie I’ve been waiting for. Its cast, grittiness, and eerie aesthetic with a heartfelt underlay connect to create one of the best films of the year.