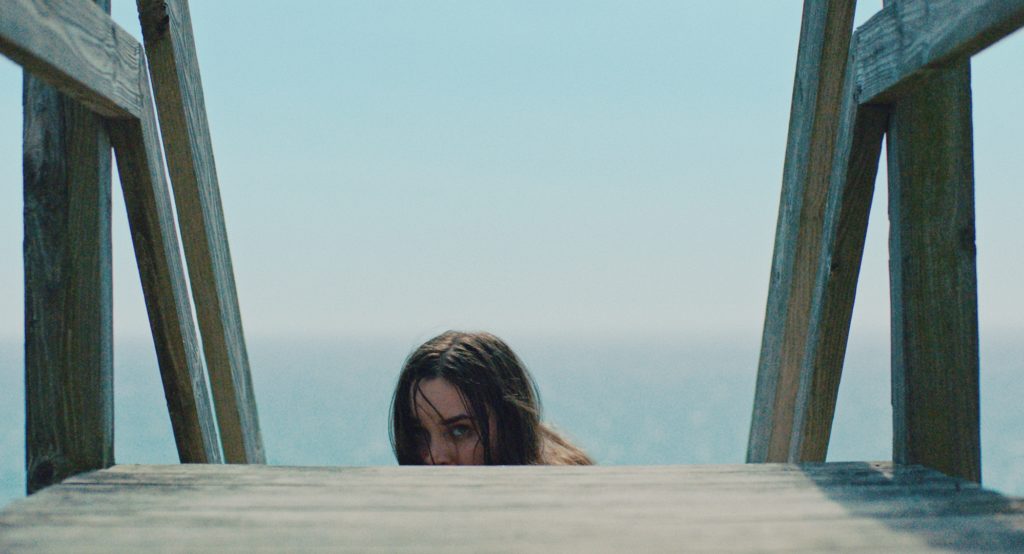 Even in the best of circumstances, there’s something uncanny about walking into a beach house. You know that it’s functionally uninhabited, but it’s set up to allow you to continue your day to day existence without skipping a beat. You’re surrounded by someone else’s inscrutably assembled possessions (or, if you’re lucky enough to own the house, possessions you only interact with a few days out of the year). Then you look out the window, and you’re confronted by the sheer vastness of the ocean– for all intents and purposes, the very edge of the world itself. These moments are likely fleeting, of course– You’re on the beach! You don’t have to work! You get to eat clam strips and read trashy paperbacks all day!– but, for me anyway, this sense of unreality continues to hover at the edges of my consciousness. It’s like you’re slipping, Quantum Leap style, into someone else’s life.

This sense of unease is present in Jeffrey A. Brown’s The Beach House long before it shows its cosmic body-horror hand. On the surface, things seem pleasant enough. Young lovers Emily (Liana Liberato) and Randall (Noah LeGros) are driving through the dunes to reconnect in solitude at his parents’ Cape Cod beach house. But we soon realize that not all is quite well: Emily, an aspiring astrobiologist (foreshadowing alert!), is on the fence about continuing her life with troubled dropout Randall, and almost immediately realizes how adrift she really is. The awkwardness only increases when Emily and Randall realize that the house is already occupied by an older couple, Mitch and Jane Turner (Jake Weber and Maryann Nagel), friends of Randall’s father (Randall, it seems, failed to clear his romantic getaway with his parents). Still, the Turners are nice enough and in need of company, and soon the foursome sit down to a home-cooked dinner.

Things take a turn, however, when the wine runs out, and Randall offers to share his stash of edibles (“Things are different now! Legalization!” he rationalizes to Emily). As they settle into stoned philosophizing about the mysteries of the universe, Jane notes, with that familiar mix of stoned wonder and calm acceptance, a strange, blue, phosphorescent fog hovering over the ocean. The night turns chaotic when Randall passes out, Jane wanders into the fog, and Mitch, worried about his already medicated wife, follows. When they awake, Emily and Randall are hazy on the events of the previous night (and probably still a little high); Jane is half-catatonic, Mitch is nowhere to be found, and a raft of grotesque jellyfish have washed up on the shore. Things escalate quickly, and Emily soon realizes she needs to fight for her life– and, quite possibly, human civilization itself. 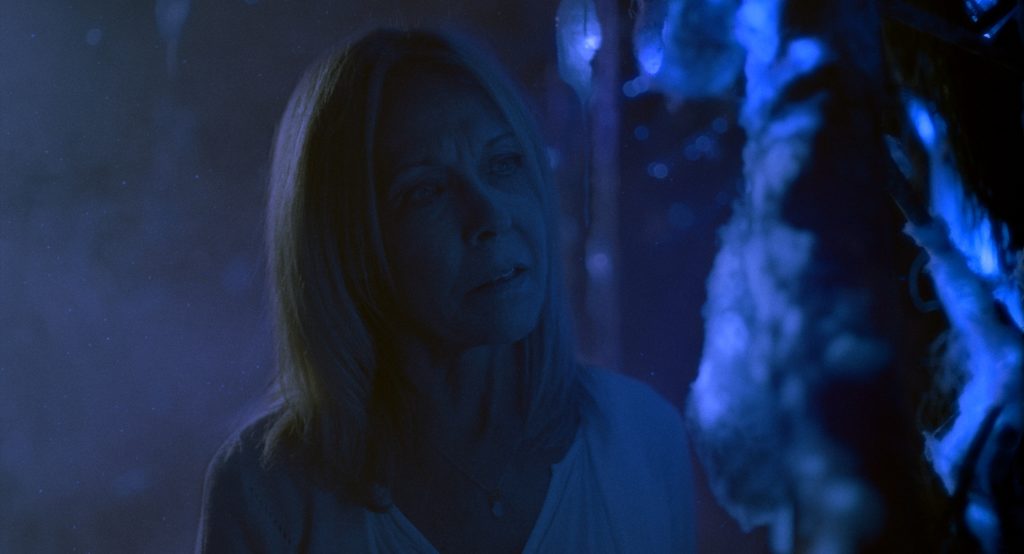 The Beach House is a slow burn. In its early scenes it plays like a mumblecore YA-drama, and I wasn’t sure if I could hang with these characters for the next 90 minutes, particularly the thoroughly unlikable Randall (in his second scene, he casually suggests after sex that Emily should abandon grad school and live with him on the beach, glibly opining “It’s all a waste of time anyway!”). But Brown knows what he’s doing, and once the gears start grinding, he creates an atmosphere of dread which never lets up. Much of this is thanks to the ominous sound design, which begins churning in a deep rumble somewhere around the end of the first act and never lets up until the credits, and the dizzying way in which Brown and cinematographer Owen Levelle shoot their idyllic locations. Even in scenes in which, nominally, we’re simply looking at Liberato sitting on the beach, one senses an almost unnameable horror, as if the ocean itself is the monster.

Of course, it’s difficult to hear the phrase “unnameable horror” without thinking of H.P. Lovecraft, an influence The Beach House wears on its sleeve (the name of the Cape Cod beach town is never specified, but one would scarcely be surprised to spot an “Entering Innsmouth” sign). As I’ve noted in this space before, Lovecraft is a difficult writer to adapt head-on, reliant as he is on the reader’s imagination. But The Beach House does a spot-on job of translating his brand of all-encompassing terror to the screen, perhaps even better than this year’s other big tentacle-show, Richard Stanley’s adaptation of Color Out of Space. All the Lovecraftian signifiers are there– the glowing foliage, the aquatic monstrosities, the hints of an alternative creation mythology– but the linchpin that holds it all together is the fact that Brown knows better than to ever tip his hand as to what, exactly, is going on. There are clues, of course (Emily’s major is obviously the biggest), but Brown respects his audience too much to deliver a full-on exposition dump– and, more to the point, knows that the film is far scarier without one.

Lest this film sound too elliptical and opaque, don’t worry. Even if you don’t have a head for metaphysics and microbiology, the film delivers on the more visceral pleasures of the genre, taking a hard jag into body horror with some satisfyingly goopy effects, from zombies straight out of The Incredible Melting Man to wriggling worms and a wincingly explicit self-surgery scene (Note to self: Make sure the kitchen knife drawer is well-stocked at the next AirBnB). It’s a testament to Brown’s talents that these contrasting tones never feel like a contrast at all; they’re both natural parts of the same edible-fueled nightmare.

The Beach House isn’t a perfect movie: a third-act killer fog lasts a bit too long (shades of MST3K’s infamous sandstorm), and the human drama in the first act isn’t quite meaty enough to fully invest (I feel like I should here emphasize once again what an incredible shithead Randall is). But, in modern parlance I’ll probably regret later, The Beach House is a mood, a disorienting hit of bad acid that overtakes you before you even realize it’s working. With its sunbleached aesthetic, claustrophobic terror, and gruesomely infectious monster-bugs, The Beach House may be the perfect film for Quarantine Summer. We may not be at the elder-god-uprising stage quite yet, but at the rate we’re going? Check back in mid-August.