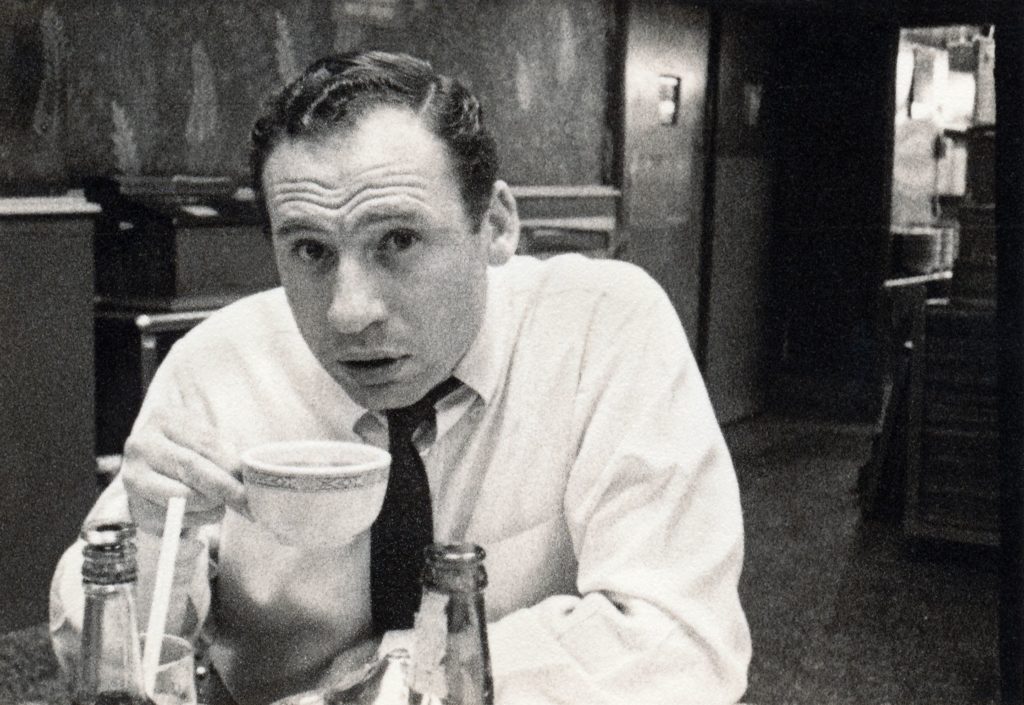 If you’re under the age of fifty or so, you’ve probably never heard of the Automat– but there’s a good chance you’ve seen it. The chain of restaurants– vast cafeterias in which sandwiches and desserts were dispensed through tidy glass windows, with nary a worker in sight– were once such fixtures of New York-style modernity that they were once a ubiquitous pop-cultural reference; you can see them pop up time and time again in mid-century cinema, particularly in tales of starry-eyed ingenues trying to make it in the big city. What was it about these now-extinct lunchrooms that made them such shorthand for progress and big dreams?

This is the central question of The Automat, the new documentary by first-time filmmaker Lisa Hurwitz. Herself too young to have visited the Automat in its prime (“What are you, eleven?” jokes Mel Brooks, who serves as the film’s de facto Greek chorus), Hurwitz structures her film as something like a detective story, interviewing some of the surviving minds behind the restaurant, as well as some of its most famous patrons. But what was the Automat– and where did it go?

The Automat, as it happens, was borne out of an existing turn-of-the-century chain of eateries called Horn & Hardart (though the Automat is most frequently associated with New York, Horn & Hardart was originally a Philadelphia institution; Automats in the City of Brotherly Love retained the Horn & Hardart name). The restaurants, with their coin-operated windows and expansive dining rooms, exuded the same sort of whiz-bang futurism as the World’s Fair and Disneyland. But unlike so many technological advances, the Automat was for everybody: its nickel-slots made it a haven for the downtrodden during the Great Depression (as well as one of the period’s few booming businesses); its lack of cashiers meant that newly-landed immigrants didn’t have to struggle with a language barrier; and it was a rare unsegregated space, in which diners of all races and creeds were invited to eat side by side. The chain’s many Broadway locations made it a favorite of starving actors and playwrights, who ensured the lunchroom’s immortality in song and screen (no less than Irving Berlin wrote a number called “Lunching at the Automat” for the 1932 musical Face the Music). Real-life immortality, of course, was another story; inflation, urban decay, and the rise of fast food eventually rendered the Automat’s business model untenable, and the chain became a memory– albeit one cherished by those lucky enough to have eaten there.

The Automat is a slice of nostalgia as sweet and fluffy as a piece of Horn & Hardart’s famous lemon meringue pie. Its interview subjects tend to go moony-eyed recalling the five-cent coffees and ten-cent sandwiches of their youth. The lush score of strings and woodwinds evokes the Manhattan idyll, spanning roughly from the days of George Gershwin to Woody Allen. The film is packed with sepia-tone photos of old New York, in which the Automat signs literally twinkle into the foreground. In short, this is an immensely cozy movie, and if you don’t crack a smile at one point or another you just might be the true automaton.

So what was the appeal of the Automat? For many of the interview subjects, one senses that their affection for the restaurant is inextricable from their rose-tinted memories of youth. Brooks recalls making the trip across the river from Williamsburg with his brothers as a child in the 1930s. Elliott Gould tells stories of spending hours between shows there as a struggling young actor, alongside the likes of Madeline Khan and Frankie Avalon. It’s a pleasure hearing these show-biz types and regular joes reminiscing about who and where they were more than half a century prior (indeed, several of the people Hurwitz spoke to over the film’s eight-year production have since passed, including Carl Reiner, Colin Powell, and Ruth Bader Ginsburg). A restaurant, after all, is really only as good as the people who ate there and the memories they formed, and the Automat was home to some of the best of both. 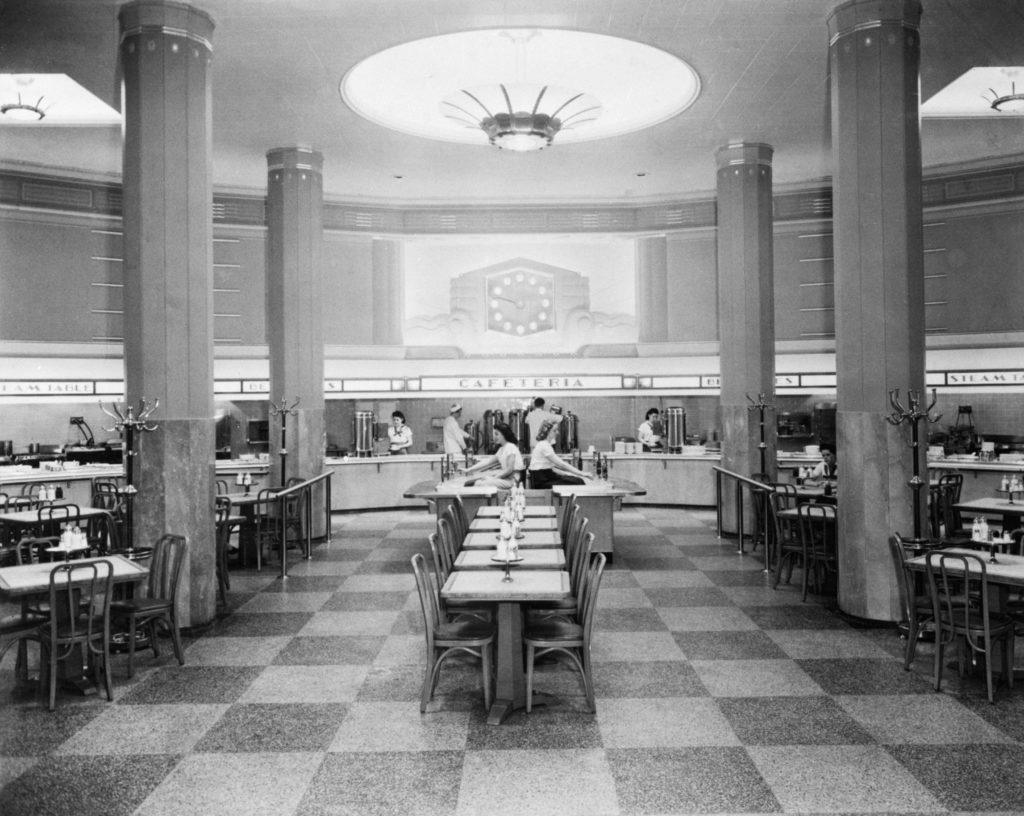 But make no mistake: the restaurant looked rad. Far from today’s fast food hubs, which often feel more like a minute-clinic waiting room than a place of fine dining, the Automat was designed to impress. Its rows of tiny windows displaying various delicacies made for an undeniably arresting visual (leading to the restaurant’s frequent cinematic cameos). The coffee was dispensed through tiny but ornate brass dolphin heads (complete with a hidden second spout for cream). Even the inner workings of the restaurant– enormous, rotating drums which allowed the compartments to be loaded from behind– are visually arresting. In one of Hurwitz’s greatest coups, we are treated to a tour of the archives of chief Automat technician John Romas (another posthumous interview subject; the film is dedicated to his legacy). This was an infrastructure that was built to last; it’s difficult to imagine the equipment from a contemporary Dunkin’ commanding the same awe 100 years from now.

So why didn’t the Automat last? That’s tough to say, even after watching an entire documentary on the subject. On paper it would seem to be a natural fit for today’s contactless, self-check-out world, but of course the “automation” of the automat was largely an illusion; all those windows were manually stocked by human hands, and the bulk of the food was made from scratch on site. In a tidbit that can’t help but feel amusingly quaint from today’s vantage, several subjects attribute the chain’s downfall to the moment they raised the price of coffee from five cents a cup to ten– but it can’t be just that, can it? We hear stories of how the restaurants became overrun by homeless visitors in the 1970s, but it’s not clear how this situation differs from the brotherhood-of-man dining utopias described a few decades earlier. So what changed?

The answer, of course, is the world– New York in the micro sense, and humanity in the macro. The Automat is a film about a chain of restaurants, but it’s more than that. The New York of the Automat’s heyday was effectively located on a different planet, populated by a different people; in less time than we might like to accept, it will be well and truly out of living memory. The Automat is not the most hard-hitting documentary of the year, but it is truly a joy to hear and see evidence of a wonderful artifact of a world gone by. Like a good cup of five-cent coffee, it’s a moment of pleasant respite in a busy, stressful world.