Flicks like The Strangers or Creep send chills down my spine.

Both films create villains that are calm, psychopathic weirdos who have snapped, and their goal is to kill our protagonists—but first, they toy with them. It’s freaky, it’s unnatural, and it’s disturbing—all keys to a great horror flick.

This was the aim for Shudder’s latest original, Superhost, which follows two struggling YouTube vloggers, Teddy (Osric Chau) and Claire (Sara Canning) who review Air B&Bs run by the site’s top hosts. They book a stay with Rebecca (Gracie Gillam), whose home has a reputation for amazing stays. When they get to the house, up in the desolate mountains, they grow increasingly unnerved when they realize that there may be something wrong with Rebecca.

While I love the idea of this flick, I was left disappointed—which, in my experience, is a rarity with Shudder originals.

The production of Superhost, at times, felt well-done, especially in lighting, cinematography, and set. But when it came to sound, it was a disappointment. Any time there was a scene that showed the murder or realization to a character, a gritty, irritating, static-infused score would blare through the speakers, mute out any dialogue or other sounds, and take away the shock that was intended to be given to the audience. By using this sound effect, Superhost came across as amateur in its ability to shock and disturb. 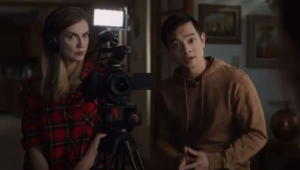 This was not from Chau or Canning’s parts; if anything, both actors had smooth chemistry, and Canning really shined as the suspicious, uptight girlfriend. I was thrown by Gracie Gillam’s performance and her overacting. While her strive to be sinister and creepy was there, she came off as comedic. Her loud yelling, her exaggerated facial expressions, the way she spoke, and her body language when trying to corner Teddy and Claire felt cartoonish. If anything, she was annoying—not scary.

There was also the acting of Barbara Crampton (Re-Animator, You’re Next), who plays Vera, a bitter, vengeful super host that Teddy and Claire had previously stayed with and given a bad review to. Her wild yelling, her stumbling through lines, and her haywire body acting came off as cheaply done and cringeworthy. 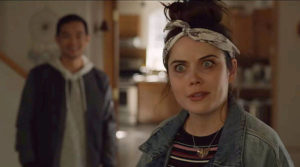 Superhost‘s script needed to be tightened—it felt jumbled, and Rebecca’s reveal came out of nowhere with too many layers on top of it. Teddy and Claire made so many stupid decisions that, as a viewer, you couldn’t really feel sympathy for them. In a scene where Teddy and Claire are fleeing the house after realizing who Rebecca isn’t who she says she is, Rebecca stands in the road, stops them, and asks them to leave their car so that she can show them something in the woods. Teddy and Claire agree to go.

Why? What kind of purpose is that? Where is common sense here?

Superhost had such a promising premise, and with Shudder behind it, I was enticed. I just wish it could have delivered the scare.