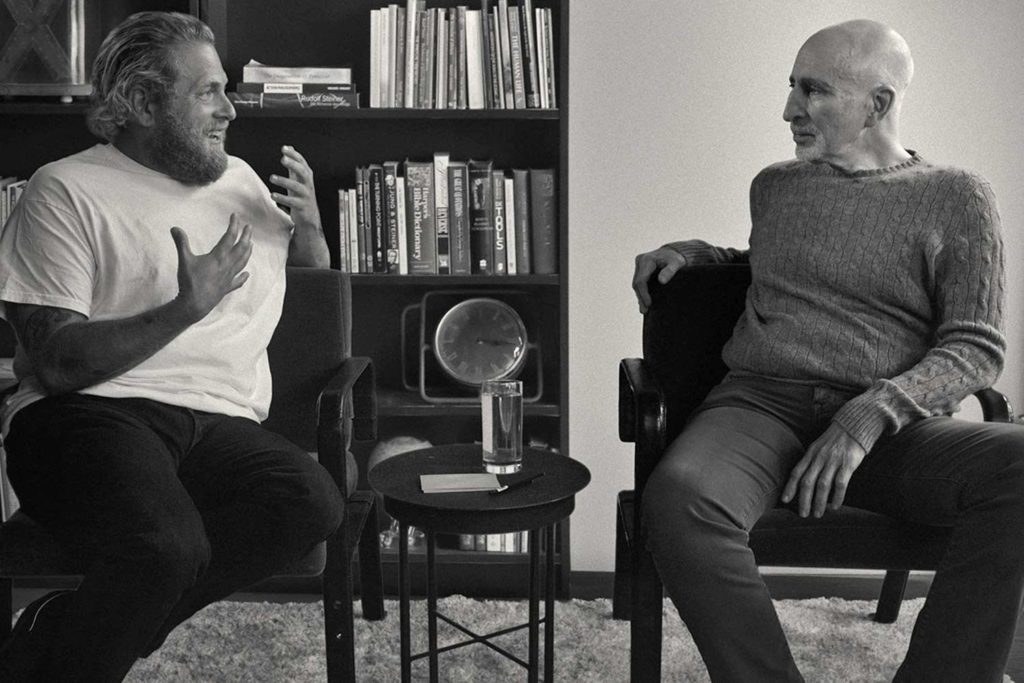 “Where has Jonah Hill been lately?” I found myself asking during the last year or so. He had been taking a breather from acting since his 2018 directorial debut Mid 90s, yet any project an actor pursues during the pandemic is bound to be interesting. Although he popped up in Adam McKay’s Don’t Look Up just last year, he has mostly been keeping to himself. Nearing 40 years old, Hill still shows a sharp eye in how to crave a subversive and satisfying career for himself; two Oscar nominations for Moneyball and The Wolf of Wall Street showed he had untapped range, yet he never let awards season slow him down. He carries so much humility with him while constantly acknowledging how surreal it feels and how thankful he is to work with his heroes like Gus Van Sant, the Coen Brothers, and Martin Scorsese, all while not facing many public scandals or controversy.

Yet Stutz isn’t about Jonah Hill, but rather his psychiatrist, Dr. Phil Stutz. Despite the age and Stutz’s battle with Parkinson’s, they’re similar in how much they listen to each other, and Hill shows such catharsis when Phil puts his feelings into words that crystalize his anxiety and depression. Hill makes a few remarks during the film that he really wants the film’s spotlight on Stutz and less on him. It becomes clear that he loves Stutz, and that he set out to investigate the person who has helped him in hopes that someone else might get the same help from the film. I think he got there.

Stutz is less of a look into the therapeutic teachings Hill wants to investigate, and rather how studying Stutz helps Hill in addition to the therapy itself. Early on in the film, Hill drops the act and comes clean to the viewer that all the organic-seeming conversations they’ve been having has been a lie to keep up the illusion that this is one continued therapy session. Maybe it’s ultimately too much of a moral question to ask (drawing comparisons to Nathan Fielder’s The Rehearsal for me), yet it’s just another cathartic decision for Hill as not only the filmmaker, but also the subject (as much as he resists it). How can Hill have Phil be honest with him if he can’t be honest about the process of filmmaking? It’s here where the film may lose some viewers; I just happen to think it takes a certain amount of vulnerability to have Hill feel the need to elevate this documentary from being just a film about Jonah Hill’s therapist.

Something Stutz and Hill share is the loss of a brother. Jonah lost his brother, Jordan, in 2017, and hasn’t spoken much about it since; he even moves on from the subject when it comes up early in the film. As Jordan passed away from a heart attack at the age Jonah is approaching, the grief is insurmountable for Jonah, who is still is in shock and needs Stutz to answer the questions he doesn’t know how to ask. Sharon Lyn Chalkin, Jonah’s mom, enters the film at one point for a discussion about Hill’s body image, a subject both hurtfully public and private in Hill’s life. He concludes that his mom isn’t to blame, but also that she wasn’t sure of a solution as she just knew there was a problem. Jonah articulates this as “the female figure in your life not accepting the way that you look,” and considers how this made him even more insecure, although Jonah and Sharon have a heart to heart they may not otherwise have if not for the third party there in Phil.

The film is incredibly liberating and feels like a labor of love for the director’s self betterment. Maybe the viewer will find this indulgent or broad, but it has a sweetness that makes it a nice update as to where Jonah Hill has been. Stutz shows a maturity for the kind person Hill wants to become, while also a pivot into the directorial career that we are seeing grow. I had grown up with his comedies in high school, from Superbad to 21 Jump Street, but that part of his career was just the beginning. Phil Stutz has really made an improvement on Hill’s outlook on himself and his life, which promises another interesting phase in his career.