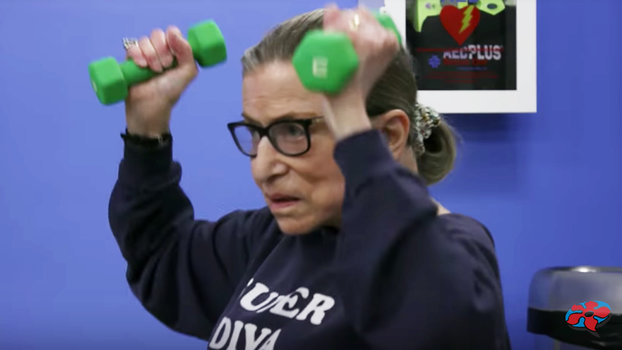 I’ve had the RBG premiere date in my calendar since the moment I watched the trailer. The tiny, eighty-five-year-old Supreme Court Justice Ruth Bader Ginsburg has long stood with her fists in the air, a champion in the fight for women. She is revered by feminists for the strides she has made for equal rights. In this documentary about her life and career, we learn a great deal about the Icon, Hero, and Dissenter: the trials she faced as a woman and the trials she won on behalf of womankind. Throughout the course of the film, we learn just as much from her as we do about her.

The documentary opens with a scene of RBG doing pushups and lifting light weights, wearing a sweatshirt that reads “SUPER DIVA!” It’s hilarious in the sweetest way, like watching your fragile grandmother kickbox. It’s a perfect introduction to the heroine: a woman with a keen sense of humor and a tireless work ethic. She attended Harvard Law School as one of nine women in a class of five hundred, was scolded by the dean for taking up a seat that could have gone to a man, and nevertheless proved herself, making the Law Review in her second year. She managed to do so while tending for an infant daughter and sick husband. She later graduated from Columbia Law as valedictorian. Despite her accomplishments and obvious legal talent, she was turned down by a number of law firms explicitly because of her gender. RBG would never admit defeat. She converted these discriminations into the fuel that would propel her into the Supreme Court, first as a litigator for the ACLU, and later as a Justice of the Court. We see Ginsburg as a woman who has it all, which may be a contentious portrayal (“Women shouldn’t have to have it all,” feminists will argue). But we see that it was her family that provided a respite for RBG; they were a source of joy and support for her. It was a recurring joke that her husband had to drag her home to eat dinner and remind her to sleep–otherwise, she would work unceasingly until four, five, six in the morning. While this speaks to the herculean work she had to do to overcome the injustices of gender discrimination, it also speaks to her tenacity and determination to advance equal rights.

Throughout her career, Ruth Bader Ginsburg fought for progress her own way. Though she respected the Women’s Rights Movement of the seventies, she never joined. She knew herself well enough to know that her path was litigation; she wanted to fight in the court for the changes women were protesting for. She cunningly brought forward a case where a man was discriminated against, knowing that she was more likely to win if the all-male Supreme Court could identify with the plaintiff. She was right. The court decided unanimously in her favor and against gender discrimination. She saw that a path to progress could be forged by social change, but that it must be paved over and smoothed by legal decision. Until the laws were modified to reflect cultural shifts, nothing could really change.

Justice Ginsburg was not always known as a dissenter. Until Bush 43 nominated two conservative Justices, RBG was fairly moderate. But after the court became majority right-leaning, she swung a hard left and took a stand for the causes she believed in. She knew that she would not agree with most of the decisions passed down. She did not flinch. She wrote fierce dissenting opinions, using her quiet voice to speak up even if the end result wasn’t what she wanted. She argued with enough vigor to incite change elsewhere: one of her dissenting opinions inspired fair pay legislation that was passed under President Obama. Again, we see RBG effecting change through whatever channels are available to her. This is a woman who makes the system work for her.

Despite everything, RBG never reacted out of anger. This was a lesson she learned from her mother, and a crucial one that she passes down to the film’s audience. She sees anger as an impediment to progress. When was the last time a screaming match resulted in agreement? We see her walk the walk. We witness the remarkably genuine and tender friendship she has with Justice Scalia (they go to the opera together!!), a man whose ideals are opposite hers. In an era where it seems impossible to be moderate, let alone friendly with someone on the other end of the political spectrum, her ability bridge that gap sets an example for us all.

It seems to me that this documentary was released at the perfect moment. The emergences of the Black Lives Matter and #MeToo movements are woven of the same political fabric of the sixties and seventies, the very cloth that RBG was cut from. Gloria Steinem, feminist extraordinaire, gives Ginsburg credit for everything that women have today, and that’s important. Protests work in changing hearts and minds, but there is logistical and legal work that needs to be done if we want to revolutionize this country. And if we truly want things to be different, we have to do what RBG did: we have to not only work hard, but work with people that we disagree with. RBG did not shout. RBG used her intelligence and crafted irrefutable arguments; she changed the game that was being played. At such a critical juncture as we are at right now, we need to remember what we are fighting for, and not who we are fighting against.

Now streaming via the Arrow Video Channel on Apple TV