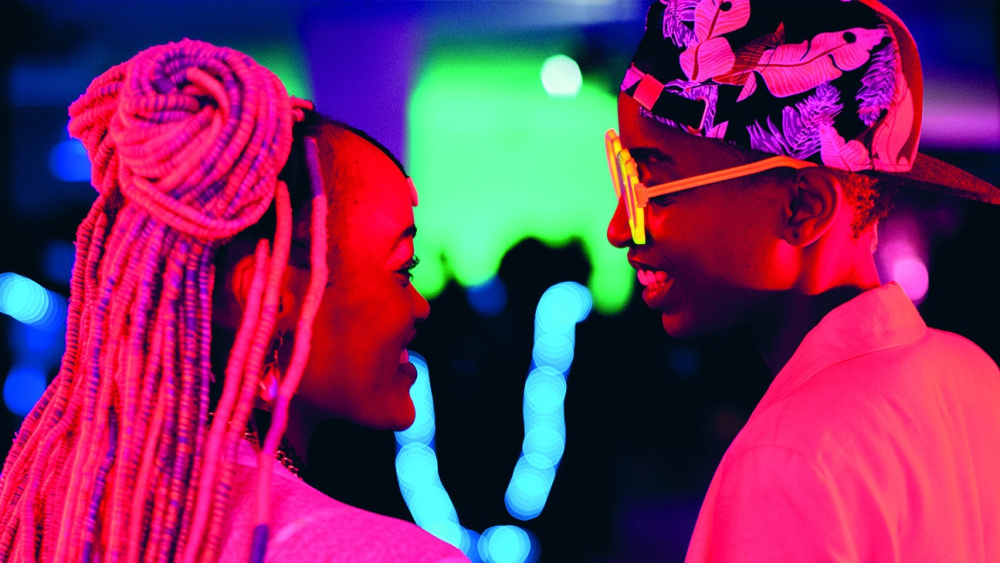 A loving romance between two atypical Kenyan girls rocks a neighborhood, and then a nation.

Boppable beats and the sound of the streets lead us into Wanuri Kahiu’s 2018 film Rafiki. The opening credits draw the audience into the dense and colorful neighborhood belonging to Kena Mwaura, our tomboyish skateboarding protagonist.

The morning sun shines on her as she rolls down the block and credits, punctuating clips of people in the streets, depicting brown bodies and faces collaged with imagery of flowers and rainbow patterns about them and crowns drawn above their heads.

The streets Kena traverses are filled with seemingly gendered activities: school girls, clad in dresses and pink, roaming around in a pack; men playing checkers with bottle caps; women sewing clothes. Kena, on her skateboard with her short hair, single earring and bright colored orange shirt, contrasts this binary through her androgynous qualities. Throughout the story she is both seen as a girl expected to desire a man and to become a wife and mother, while simultaneously seen as “one of the guys,” and thus not bound by femininity.

While floating between these gender roles allows her to avoid conflict for a while, it becomes an issue when she meets Ziki.

Ziki, a girl who catches Kena’s eye in the streets, is a dancing and giggling femme whose box braids are wrapped in bright colored string that make her hair look like rolls of smarties candies. To say the least, she is super cute.

They meet officially when Kena chases down Ziki and her friends for ripping down her father’s campaign posters. Both Ziki and Kena are the daughters of competing candidates running for the Members of County Assembly political office positions. After Ziki apologizes for the poster defacement, they befriend one another and fall in love over a short period of time.

Both, in their own ways, try to reconcile wanting to be open about their feelings with the expectations that are put on them to be, as they say, “typical Kenyan girls.”

An important aspect subtly woven into the introduction of the film is a lacking sense of privacy. In the opening, we do not only see the architecture of the neighborhood, but also the number of windows within the architecture. These overlook the streets in which much of the action in the film occurs, and depict the roads as space to see and be seen.

Kena and Ziki meet in these streets and are seen together throughout the film, which sets up the villain of the story: the homophobia baked into the fabric of their community. 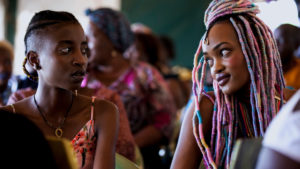 Outness, the act of being openly and publicly gay, lesbian, bisexual, intersex, trans, or whatever you may be, becomes an issue for Kena. Ziki desires to be open about her feelings towards Kena, but this would cause trouble with those who believe homosexuality is a sin and an abomination.

It is unclear if Kena’s homosexual attraction here is new to her, but her relationship with Ziki tests her ability and willingness to present herself to her community, as opposed to living more comfortably in the shadows of the proverbial “closet.”

In one scene, Kena and Ziki go to a party where they sit with Kena’s male friends for a short while. In these few moments, one of Kena’s friends, who has shown himself to be aggressively homophobic, names Ziki as his “future ex-wife” and then yells at a young man walking by calling him “fag!” and “homo!” The other of Kena’s friends congratulates her on her marks in school calling her “the smartest nurse in Slopes,” even though Kena and Ziki discussed that her grades would allow her to become a doctor instead of a nurse.

Here, Ziki gets a picture of what it is like for Kena in her closeted existence.

Kena can slip hints to her homophobic friend that he should accept people, but this does not change his verbally and physically aggressive ways. Kena can get good grades and reach high levels of achievement, but she will not be recognized to the fullest extent of her abilities.

They both leave the party separately and end up having a beautiful candlelit date. They discuss what it means to be “real,” and that they only truly feel this when they are together. But most of their interactions are in private, and so they are only allowed to be affectionate in secret. 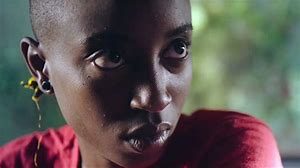 Later, Ziki implores Kena to be open and honest about their feelings in public, and Kena remarks that this would be “irresponsible.” Yet living in secrecy does not last as long as Kena would like, and when they are outed, they must face the limits of what is acceptable in their community and to their families.

This film tells a story which has been rendered reprehensible by some, and was even banned by the Kenya Film Classification Board due to the lesbian narrative. This response brought more attention to the film globally, as it mirrors the homophobic backlash the characters experience.

More compelling than the drama surrounding the film, though, is the love story on screen.  I have watched many movies in my life, and not many have included romantic relationships between women of color: the only two that come to mind are The Color Purple and Set It Off. I love both, but neither center the love story as much as this film. Granted, I have not yet seen Pariah, nor have I watched the full canon of films by filmmaker Cheryl Dunye, but even my research has not yielded many results.

This story is the first I have seen on the big screen that focuses on a romance between two women of color. Told as a sensuous and patient love affair, free of jealousy and sprinkled with hope and resilience, Rafiki is an instant queer classic. The message of the story pushes us to be bold and brave, to love with abandon, and to let ourselves be true to ourselves, not only in private but out in the streets too.

Area theatrical premiere!
Opens Friday, 5/10 @ the Brattle Theatre, screens through 5/16. (Click here for tickets and showtimes)
A discussion will follow the 7:00 screening on 5/13 with MIT Professor M. Amah Edoh!