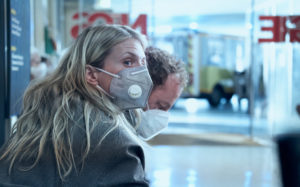 Elizabeth Hanzen (Inglorious Basterds‘ Melanie Laurent) wakes from a deep, cryogenic sleep in a medical pod. She’s hooked up to an IV, her brain is being analyzed, and remembers nothing from her life before waking up—including her name.

To make things direr, the pod’s AI, MILO (Mathieu Amalric) alerts Elizabeth that she is slowly running out of oxygen and her survival rate is increasingly low. Through flashes of ethereal memories and searches through MILO’s database, Elizabeth uncovers details of her life before.

The film offers many twists and turns, aiming to confuse the viewer right along with Elizabeth as she hears mixed messages from the outside of how she really got into the pod. The film’s ability to confuse the audience—all while maintaining a strong, linear storyline—created great disorientation for me. I loved it.

Oxygen is anxiety-inducing and claustrophobic. There are some gorgeous, wide camera shots that show us just how trapped Elizabeth really is.

This created a feeling of being disorientated. It was what made the film for me; I felt just as unnerved as Elizabeth was as she tried to escape. Watching her scream and cry and pound on the door of the pod—all while a robotic needle is trying to sedate her—made my skin crawl. Laurent, with her staggering emotional range, was a fantastic choice for a one-woman film; her panicked sobs and anguished cries for answers were chilling and poignant.

Seeing glimpses of what life is like in Oxygen’s reality was just as chilling—through Elizabeth’s flashbacks, it appears that a virus (something we as an audience are all too familiar with) has overtaken humanity and it causes rapid internal bleeding and deterioration.

With the COVID pandemic, paired with the film’s themes of isolation and desperation, Oxygen hits hard and mercilessly as a futuristic, claustrophobic neon nightmare that lingers in your mind long after you’ve closed your Netflix tab.