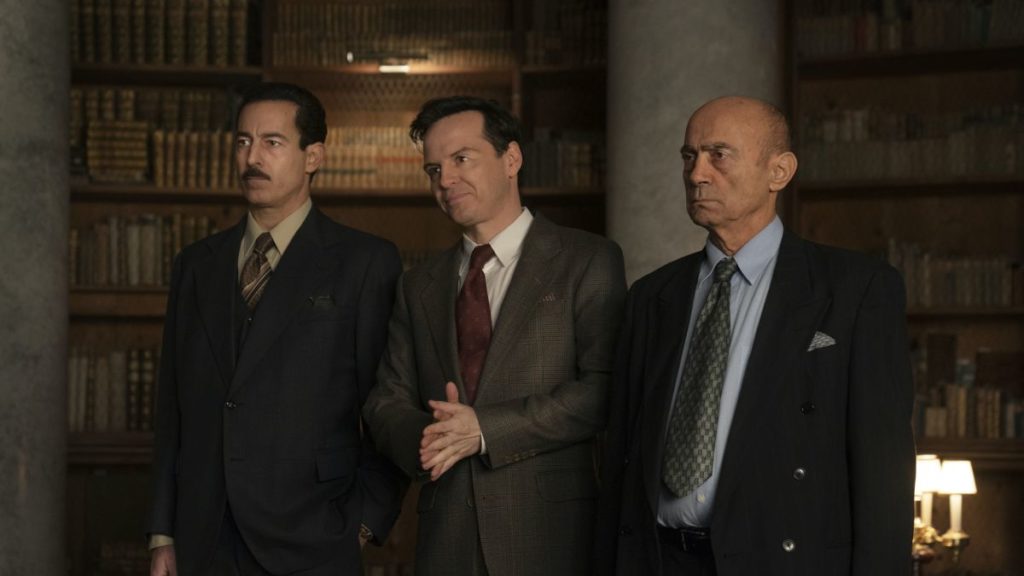 The HBO Max original Oslo—concerning the Norwegian based backchannels between the Palestine Liberation Organization and the Israeli government that led to the Oslo Accords—is marketed almost entirely to an English speaking audience, inherently putting the film in a certain geopolitical box that ends up a bit messy.

The white characters—the Norwegian couple of Mona Juul (Ruth Wilson) and Terje Rød-Larsen (Andrew Scott)—are the film’s dramatic centers, even if they give lackluster performances, rather than the various cast of geopolitical actors from Palestine and Israel. The people of color, then, become passive despite their negotiations.

Even the film’s narrative focus on the Oslo Accords seems a little self-serving to the “white savior” complex since– spoiler alert– they end up failing even in the short-term (let alone the long-term). The victories achieved at the end of the film are quickly negated by a few title cards that fill in the next decade of Palestine-Israeli relations. The story would lose its dramatic weight had it been told from a Middle Eastern perspective.

At least director Bartlett Sher reveals the American involvement in the Oslo Accords for what it was: a deceptive public face completely unaware of the backchannels. Bill Clinton doesn’t even come into the picture until the final two minutes of the runtime. It’s not terribly difficult to imagine a Ron Howard version of the Accords, with Edward Norton playing the American president who controls the screen and garners a best performance nomination at the Academy Awards. 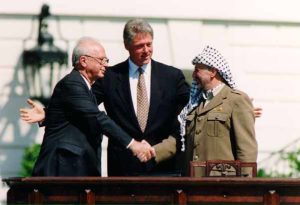 At least in the version we got, the American story typically propagated—with the famous photo of Clinton between Israeli Prime Minister Yitzhak Rabin and PLO chairman Yasser Arafat as the face of the narrative—is belittled. “Don’t tell the Americans,” Larsen whispers at least once.

The few sequences set in the Middle East are insultingly tinted yellow, and although this isn’t a new cinematic technique, it’s painfully elevated to a new level. The use of “a sickly shade of yellow” in American to represent poorer countries, according to Adhora Ahmed of The Daily Star, “increase discomfort and heighten tension.” This ultimately “conveys that these places and people are uncouth and unwelcoming.” The sickly yellow, in other words, reinforces the colonial-colonized power dynamics by putting viewers viscerally at unease with colonized places. The intensely sickifying tint of Oslo, then, is a product of its Western production.

Even in film form, Oslo, which is based on a 2017 Tony Award-winning play of the same name, falls a bit short of acceptable in quality terms. Just before the first meeting in Oslo, the PLO delegates Hassan Asfour (Waleed Zuaiter) and Ahmed Qurei/Abu Alaa (Salim Daw) are in the backseat of Larsen’s rental car. The long shot of the car clearly establishes the position of the car within the Norwegian scenery: a forest of some sort is on the left of the car while a body of water is on the right, closest to Abu Alaa’s window. He looks out his window, on the left, and sees… trees… not the body of water that the geography of the filmmaking led viewers to expect.

It seems a reasonable hypothesis to suggest these formal missteps are the result of Sher’s first venture into cinema. Sher had directed the play and at times, such as in the car scene described above, it feels as if some basic cinematic tools remain unimportant; whereas at other times, such as with the too potent yellow tinting, the unique stylistic tools at cinema’s disposal that separate it from theater are hyperextended.

Like its politics, Oslo’s form can be a bit sloppy.

Oslo is available for streaming on HBO Max.