If you’re on an escapist jaunt–which, who can blame you?–you may want to consider Paris, in 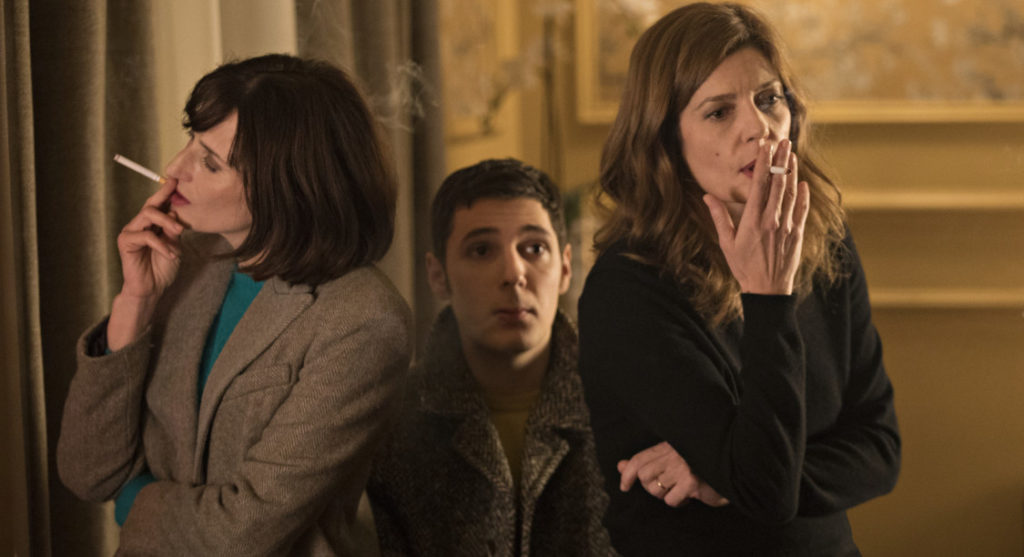 a sojourn into the wry and tragic world Christophe Honoré builds in On a Magical Night. His is a world that exists like a ghost: in our realm, but not of it.

This comedy begins with dual infidelity. We meet Maria, our protagonist, hiding impatiently behind a curtain, watching her lover kiss his fiancée goodbye. She bursts forward, shocking all, ends the farce, ends her insignificant dalliance with this man. She returns home to her husband, Richard.

Richard sees the texts come through. (They always see the texts come through!) He confronts her about the affair, and after a surprisingly brief argument, Maria checks into room 212 at the hotel across the street. From there, she has a perfect, full view of her apartment and Richard within.

The magic kicks in after Maria wakes up in the middle of the night. She hears a Scarlatti sonata playing from the adjacent room, whose door has unlocked and swung open. She tiptoes into the room and is confronted by Richard–except this Richard is not 50, but 25. To accompany him, Honoré resurrects a slew of characters from the past: Irène Haffner, Richard’s childhood love; Maria’s deceased mother, as well as her very deceased grandmother; a series of Maria’s spurned paramours, trivial flings.

These traces of former lives, these surreal ghosts, become witnesses, jury members, litigators, judges. They are here to put Maria, a professor of History of Justice and Legal Proceedings, on trial. The film recounts a history of marital justice, conducts the proceedings that will condemn or acquit Maria. The dialogue is riddled with judicial language: Maria’s ghosts accuse, plead cases, interrogate, cast judgments. It is no coincidence that she checks into room 212. As young Richard elucidates, Article 212 of the Civil Code states, “Spouses owe each other respect, fidelity, and assistance.” Of that, is Maria guilty?

What is culpability in a marriage? Maria is taken aback by Richard’s reaction to her affair because she assumes mutual infidelity. This is how she believes marriages last. This is the reality she was subscribed to–is she guilty because it is not Richard’s as well? She grapples just as much with the chasm between their understandings as she does with her own fault in their gradual separation. The trial becomes, for her at least, centered around the question of what she wants, and what she wants with Richard.

Despite the inquisitorial subtext in the film, the ghosts’ trial of Maria dissolves exactly because she confronts the reality they’re offering. She looks, maybe for the first time, at the harsh reality, the brutal history. Old Richard, reflecting on his marriage, says, “Love in the present has no meaning. Love is always built on memory. Love is always a place chosen together. A past.” In confronting these figures from her past, she relives the painful and tender and sweet memories of Richard. In confronting their history, she remembers their love, and that has nothing to do with whether Maria is a good wife, or Richard a bad husband. It’s not about guilt or innocence.

Love is the dissolution of thresholds. It makes ghosts possible. It makes magic possible. Love is a realm of and for itself. Love is separate and special, unlike any other thing or feeling. Love, we think, transcends everything, but nothing is that tidy. Honoré leaves us with the question of whether love can transcend marriage, its boundaries and expectations.

The beauty of the film is in that gray area, in the confessions we hear and the questions never answered directly. The beauty of the film is the way it subsumes the gray area, the way Honoré captures the surrealities of a relationship. On a Magical Night looks like the world looks when you’re falling in love, when you’re breaking up. He transports us into that other realm, the one where there is no right and no wrong, just two people making it work, or not making it work–whatever works for them.

If you’re interested in immersing yourself in someone else’s unresolved love story, On a Magical Night opens Friday at Coolidge’s Virtual Screening room.