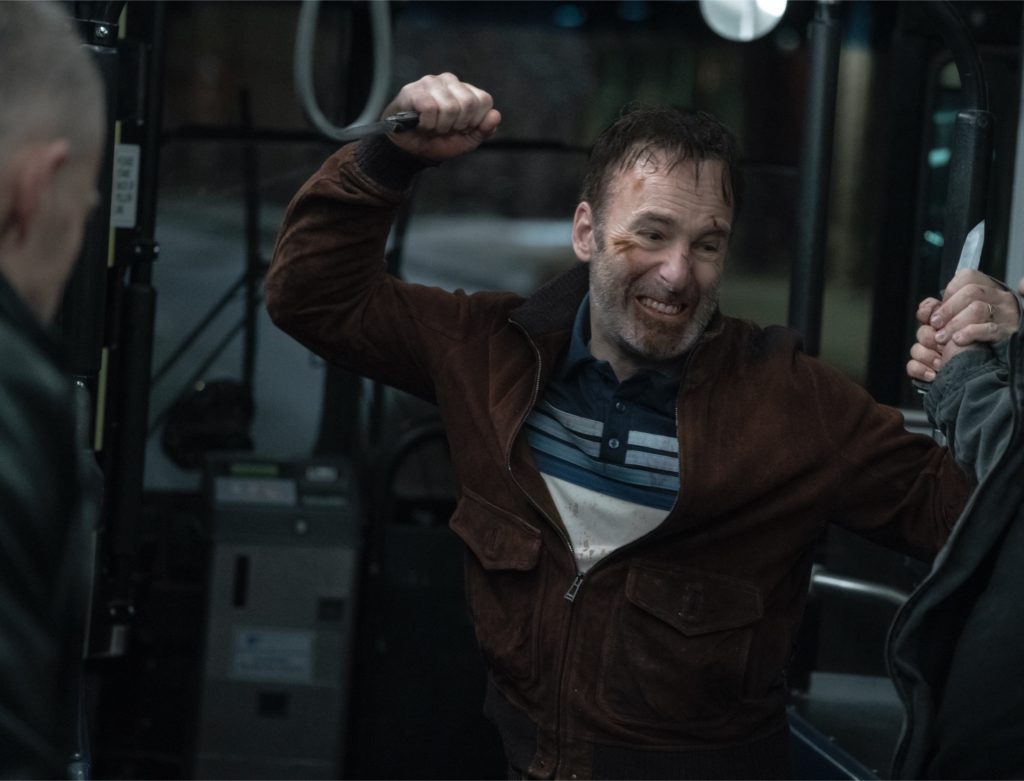 Nobody, written by Derek Kolstad of John Wick fame (and produced by David Leitch from the Wick directorial team), makes no false pretenses in its practical re-creation of the Wick franchise—a former super-fighting-badass attempts domestic retirement but a traumatic incident resurrects their former life. Except Nobody is much more political. John Wick came out in 2014—before the presidency of Donald Trump—and, in most accounts, was rather apolitical. Post-Trump, Nobody feels intentionally reflective of the Trump presidency, but unlike most mainstream movies in the Trump/post-Trump era, Nobody has a dark conservative streak.

Hutch Mansell, played as a coffee-in-hand family man by Bob Odenkirk, lived a former life as an “auditor” for the military—an auditor of the “three-letter agencies,” that is. When he was hired, nobody from these agencies, presumably the CIA and the FBI, would be left alive. Whereas Keanu Reeves’ John Wick acts separate from any governmental power, Hutch is a military man. His job eradicating workers from “three-letter agencies” also seems to be a significant conservative addition after the firing of FBI head James Comey and following the Mueller investigation. A rogue military man in opposition to the FBI certainly seems like a protagonist Trump would admire.

The instigation of violence—a group of men harassing a young woman on a public bus—initially feels more politically earned than Wick’s dead dog. But there is something comical and absurd about the idea of a dead dog catalyzing a series of approximately 91 murders that encourages a mental divorce from reality. This separation of reality and fiction helps effectually justify Wick’s kill-spree. The sexual harassment (and potential assault), of course, is more realistic, which makes Hutch’s violence more damning. He doesn’t give the men a good beating (nor does he think to call the cops, as would have been the encouraged real-life response), but, embodying “the good guy with the gun,” he brings the entire group of four or five to the brink of death (one dies shortly after Hutch leaves the crime scene).

The final action set even takes place in a factory Hutch buys from his father-in-law, who, much like a broken record, repeats over and over how he “built it from the ground up.” Early on, Hutch tells his father-in-law that he “just wants something for himself,” consistent with the American dream. The action-climax doesn’t just occur at the factory, but the building itself becomes a character, set with booby traps and establishing shots that most other locations are denied. In this, the success of the American dream is married with violence. This distasteful marriage might also operate as a one-sentence summary of Trumpian policy.

Before Hutch’s domestic facade is broken, in a typical conservative expression of lifestyle preservation, he asks his wife Becca (Connie Nielsen), “Do you remember how life used to be? I do.” After his past life surfaces, it becomes clear that, for Hutch, the mundanity of domestic life flops like a dead fish in comparison to a life built around state sanctified violence. Thus, while his comment seems innocent at the moment and is situated in the context of marriage troubles, it reveals his penchant for profane violence. Just a few months into Joe Biden’s presidency, it’s tough not to hear “Make America Great Again” in Hutch’s plea for the past—a plea that realizes in dozens of murders.

Now playing in theaters (but again, please be careful)