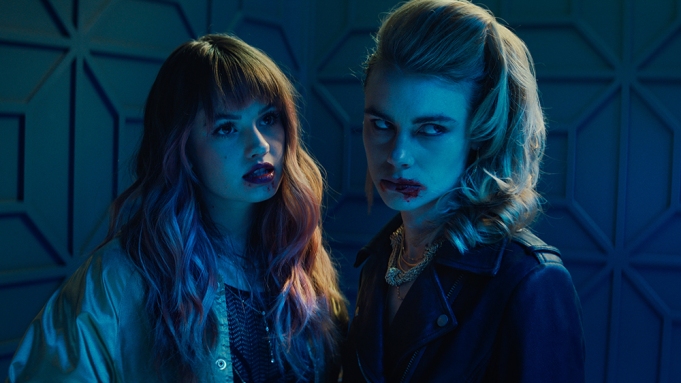 It’s about time that we have a new ultra-glossy glop of nonsense. If Nicolas Winding Refn isn’t making a movie anytime soon, who else will give the slow-motion strut of devastation and hubris in front of neon lights?

This responsibility somehow falls into the hands of director Adam Randall, who has nothing to do with Refn nor color-contrasted cinematography, but is given the task of making Night Teeth that sort of movie (or maybe, Randall sees that void, too). His last full-length was I See You, a decently-received horror film that featured Helen Hunt and a masked invader that I’ve determined to be meme-hilarious but maybe not so welcoming in my house under the right shadow. This film seems like it was meant for a magazine spread, but if we can accept that Night Teeth doesn’t have anything to prove but be a fun, short-lived high, then maybe our bodies won’t feel as drained from life.

Jorge Lendeborg Jr., who has grown from the age of Transformers and Love, Simon, is Benny, a college student who decides to sub in for his older half-brother Jay’s (Raúl Castillo) limousine driving job to make money. Seemingly unaware of the neighborhood troubles, in which the centuries-long truce between vampires and humans has been contested by recent murderous events, Benny picks up two women, Blaire (Debby Ryan) and Zoe (Lucy Fry), who are clearly vampires by the way they state, “We must hit all of these spots before daylight — MUST,” when they settle in the backseat. Little does he know, Blaire and Zoe work with Victor (Alfie Allen), the vampire who makes the decision to break the truce. While Benny is trying to be a polite serviceman, Jay spends his time tracking down Victor to stop him from killing off the local lords that have kept peace throughout the years.

The edgespeak that comes from Blaire and Zoe is left to be desired. They resemble the models from Refn’s The Neon Demon — ostentatious style meant to woo and inspire the young crowd, but without succumbing to emotion, vulnerability, humor, or any other sort of giveaway that would lead someone to think that they have interacted with humans before. But Randall might have a passion for fashion, and that comes through in the fight scenes, witnessed through Benny’s perspective. When Benny finally does the first bad-but-heroic thing and smashes a bottle over a vampire hunter, time slows down for his point-of-no-return as Blaire and Zoe are fighting in the background. This also happens again when he watches through a window, which gives Let the Right One In vibes when we see Oskar watching Eli ripping limbs apart in the pool scene. There must be a shared fascination of vampire strength that can account for this switch in viewpoint.

I don’t hold much vitriol for Netflix originals most likely intended for teenagers, especially this one. But for anyone who had initially tuned in to see Megan Fox and Sydney Sweeney, I, too, was hustled, scammed, bamboozled, hoodwinked, and led astray. They only appear for a few minutes, but many downfalls could have been tolerated had they played the main vampires. Still, like an afterparty that seems like it’s heading to disastrous regret, Night Teeth might be worth seeing it until it hits daybreak.