At this point it must be said: South Korea is a bona fide cultural superpower. Contrary to the beliefs of our award-blogger president, this is not a new development. The past decade has seen the global spread of K-pop, the infectious, weapons-grade strain of popular music that renders its American counterparts positively flaccid by comparison. By the time Bong Joon-ho’s Parasite righteously laid waste to this year’s Oscars (which, impossibly, was only three months ago), it was clear that American audiences may finally be ready to delve into the wild, wonderful world of Korean cinema. This, of course, means renewed interest and awareness of masters like Bong and Park Chan-wook, but it also hopefully means more new titles, large and small, will make their way to American shores.

The latest Korean import to make its way stateside is Monstrum, a historical costume-kaiju epic debuting today on horror streamer Shudder. Monstrum is the sort of foreign film that American distributors might not have bothered with a decade ago– too modest for the multiplexes, too silly for the arthouses– but it’s a lovely little bit of monster-mash entertainment, and I’m glad it made the trip.

The tale is set in the Joseon era of feudal Korea, ravaged by plague, poverty, and, possibly, an elusive, savage beast known as Monstrum. The king and his court are split as to whether the monster is real or a figment of the popular imagination, but they call upon retired royal guardsman Yun Kyum (Kim Myung-min) to seek out whatever might be dwelling in the forest. With his daughter Myung (K-pop star Lee Hye-ri), brother Sung Han (Kim In-kwon), and Royal Officer Hur (Parasite’s Choi Woo-shik) in tow, Yun Kyum sets out to unravel the mystery. Is there a monster– and even if there is, can it compare to governmental corruption?

From a budgetary standpoint, Monstrum is clearly no rival for the Disney-industrial blockbuster complex; while its acrobatic fight scenes are impressively staged, it indulges in some wobbly CGI, and its period art direction occasionally drifts into Xena: Warrior Princess territory. Yet what it lacks in polish, Monstrum makes up for in spirit. For a film filled with graphic dismemberments and oozing pustules, there is an earnestness to the proceedings that is palpable and positively charming. The performances and characters are uniformly likable, and while the film is never humorless (up to and including several instances of fart humor), it takes its story completely seriously. 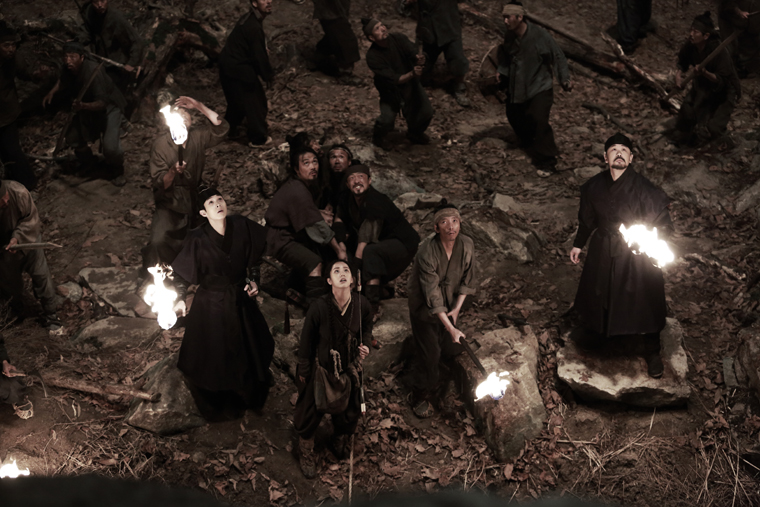 Interestingly, much of the second act plays out less like a monster movie and more like a detective yarn. Yun Kyum is a fearsome warrior, but he approaches the village’s monster problem like a sleuth, following clues and piecing together evidence. Adding to the conundrum is that no one seems to be sure whether Monstrum is real or not; even as he organizes the search team, the king voices his suspicion that the creature is a fantasy concocted by his shifty prime minister. It’s a testament to the movie’s charms that this mystery holds your attention, even as its conclusion is a foregone one.

Because let’s face it: even if you don’t watch the trailer or see the poster, the movie’s on Shudder. There’s not not going to be a monster. Fortunately, Monstrum delivers on that front as well. Again, Monstrum’s CG budget clearly isn’t hefty enough to convincingly portray its title character as a flesh-and-blood creature, but its design is loaded with character, and takes a form uncommon in either classic or modern kaiju cinema. Korea’s monster movie history may not be as prolific or as celebrated as their neighbors’ in Japan, the city stompers they have turned out are notably offbeat, from the suitmation classic Yongary, Monster from the Deep (the only monster who gets down to surf music!) to the gonzo blockbuster Dragon Wars (starring Robert Forster!) to Bong Joon-ho’s The Host. Likewise, the approach Monstrum takes to its monstrosity is suitably unusual: at one point it is revealed that the creature has a nickname that’s too good to spoil here, and instantly doubles its personality.

As the pandemic grinds on, it is becoming clear that 2020 is going to be a year without a summer blockbuster season (give or take a Christopher Nolan joint). On the one hand, this dearth and the rise of the virtual screening room is giving smaller indie films more of the oxygen they so richly deserve (Bacurau for Best Picture!), but I’d be lying if I said I didn’t miss the empty-calorie thrills of a big, dumb, high-concept blow-em-up. Monstrum effectively serves as a halfway point: a scrappy little foreign film that offers all the popcorn mayhem of its Hollywood counterparts. The world may be in shambles, but you can still see a movie in which a giant bulldog loudly farts on a master swordsman, and you know what? Sometimes that’s all you need.