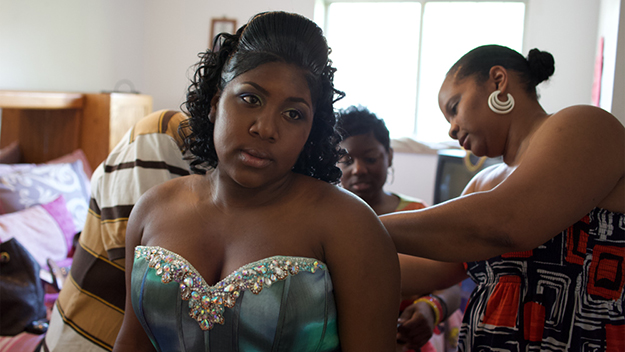 A night to be remembered, glowing with glamour, grandeur and glory.

Prom is known across the nation as a rite of passage for young people. It is an event imbued with romance and enchantment, and by the same token a setting for heartbreak and torment. While some schools in the U.S. have done away with the semi-formal dance, others have embraced it.

This documentary (with no affiliation to Woody Allen or his film of the same name) follows the 2012 Flint Northern High School senior class in the week leading up to the event, the magical night itself, and the aftermath.

For students at Flint Northern High School in the city of Flint, Michigan, the senior prom is the pinnacle of fame and celebrity. It is the ultimate setting for the celebration of your successes and a night you are expected to remember for years to come.

This film follows the whole community as all come together in preparation for the big day. The girls plan furiously: setting up hair and nail appointments, dress shopping, finding dates, and making sure their hair and outfits are up to snuff.

The boys plot for a night of dancing and debauchery. Almost each one talks a big game for the cameras of needing alcohol, weed, and condoms to last the night. The parents repeat, “No sex, no alcohol, no drugs,” as they reminisce on their own prom nights. And the school administration reminds students of their studies.

Not every senior is allowed to the prom. Attendance depends on graduation status at Flint Northern, which is the administration’s way of incentivizing students to keep their grades up. Due to this, the dance is not only an opportunity for the students to show themselves and their dates off, but it becomes a symbol of their successes and the strife some students have had to overcome in their high school career.

On the day of the event, though, studies are put behind them and each person shows up and shows out. The roads leading up to the event space become the pre-show stage. As the kids arrive and one by one step out of their polished and stylish vehicles, an imaginary red carpet unfurls for each senior, and they greet those awaiting their arrival.

Roads are lined with family and friends with cameras and phones waiting to see what kind of car or bus the students will roll in on. Whichever direction the young people face as they make their way into the venue, there is a lens for them to pose for and someone to tell them how fabulous they look.

The pageantry of it all melts into a jovial atmosphere as the seniors enter the dance floor. The pictures have been taken, the memories have been made, and the students set their mind to eating, dancing, and being merry.

As some of the students remark, Flint is not known for these kinds of stories.

When news broke in 2014 of deaths in the city due to lead-poisoned water, the local government of Flint was criticized for failing to provide safe amenities to its citizens. Although the conversation has died down, the national concern has not gone away. A sense lingers that the city has stunted its inhabitants from a lack of basic protections and resources.

Census polls show that since 2010 the population of Flint has shrunk by 6.1%, compared to Cambridge, MA, where the film will be shown, which has grown by 13.1%.  The news stories told since 2010 about each city cannot be presumed as the cause for the difference in growth of these two cities. But both Cambridge and Flint had populations near 103,000 people in 2010, and in less than a decade these cities populations have drastically diverged. The stories we tell of each of them could have a correlation to this effect.

This film was produced in 2012, and even before the water crisis Flint’s name was associated with grief and calamity. The first words in the film come from four seniors describing what news coverage of Flint focusses on, including stories about murder rates and serial killers. They tell the interviewer that the media does not cover positive events in Flint.

This film is here to do exactly that: to tell the story of an annual event that shows off the pride and beauty in the lives of these young people in Flint. And their joy is something to behold.