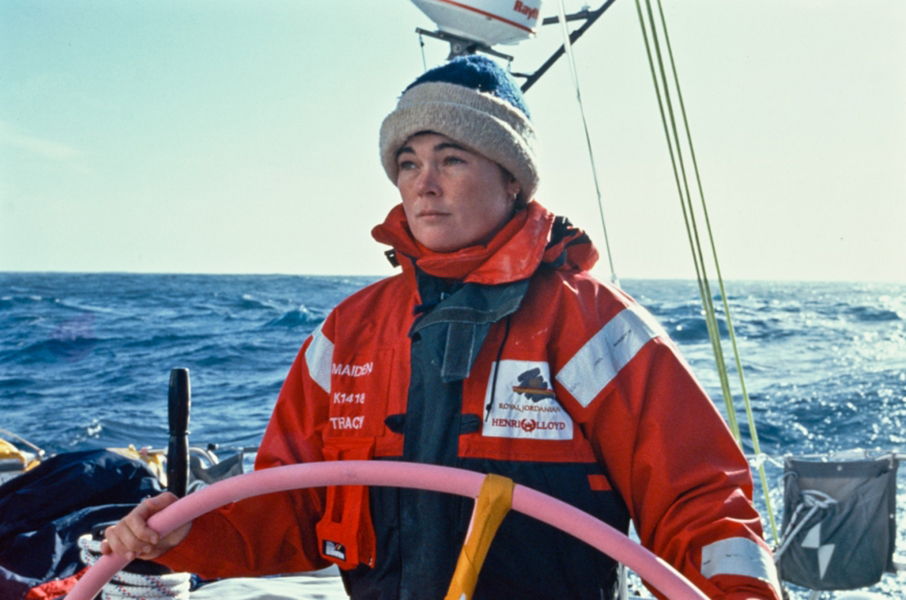 1989-90 Whitbread Round the World Race: Tracy Edwards, Skipper of Maiden

The thrilling story of an all-female sailing crew, out to beat the big boys of boating.

Rip-roaring winds and thrashing waves open this documentary which tells the harrowing story of skipper, Tracy Edwards, and her all-woman crew’s fight to compete in and win the 1989 Whitbread Round the World Race.

“Girls are for when you get into port,” was the explanation Tracy got in 1985 when she asked to join a crew on another boat in the 43,000 nautical mile race. 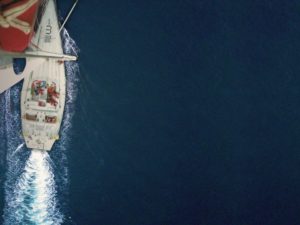 Now titled “The Ocean Race,” sponsored by Volvo in place of Whitbread Brewing Company, this competition was one of the first ever round-the-world yacht races. 1985 marked the 4th Whitbread race, and they occurred every three years. The start/finish line would be in the U.K. and teams would sail for months through the Atlantic, into the treacherous Southern Ocean, then through the South Pacific, and back into the Atlantic for the last leg.

As with too many sports activities, this race, and the sailing world at the time, was dominated by men. Tracy Edwards, a wayward high school dropout turned nomadic 20-something sailor, first heard of the race while living on a boat with a crew of misfits like herself, and knew immediately she would sail it.

Tracy desperately wanted to crew a boat in the race, as she had fallen in love with sailing and wanted the challenge of competition. The heartbreak she suffered when she was told no the first time almost successfully convinced her the race was not a place for her because of her gender.

In a twist of fate, a man she met on the boat she and her friends chartered convinced her that this race would be her mission. This man was Hussein bin Talal, the King of Jordan, and not only was he an encouraging voice for Tracy, years later he proved to be instrumental in securing a racing boat as well.

After traveling in the 1985-86 race, only as a cook, Tracy was determined to actually set sail in the next race and decided the only way to do this was with an all-female crew.

She roped together a crew of women sailors to join her. Women from the U.K., the U.S., and France were recruited for their expertise and willingness to dedicate years to the project. 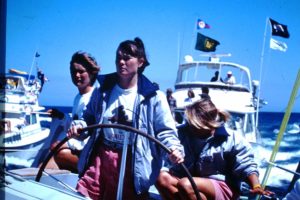 Planning took upwards of 2 years, fixing up the ship took several months, and preparing to sail together also took a substantial amount of time as well. The race itself was several months long, and so the dedication from the crew was imperative. Even with all of this time put into the project well as the physical exertion of this kind of sailing, the isolation from their families, and the emotional toll of being out to sea for months, the 12 women aboard Tracy’s boat, named Maiden, could not have been happier to be involved. This came to amuse the male sailors and journalists who believed that women would not only not enjoy these aspects of the race, but also would crumble emotionally and physically from the toll the race takes on a person.

Though excitement and determination pulled them through the race, terror and doubt were also present, especially when setting off for the second leg of the race through the Southern Ocean, otherwise known as the Antarctic Ocean. This part of the ocean is known for its breathtaking cruelty.

Alarming temperatures, convulsing waves, and only distant access to rescuers make the Southern Ocean an intimidating and often tragic place to be as a sailor.

Many people watching the voyage of the Maiden thought these women would die, perhaps through this leg of the journey. Instead, Maiden won this, the most perilous, leg, and they go on to win another leg as well.

They sailed, with every ounce of grit and endurance one must give for a journey this long and taxing, with trust in one another, and a supreme respect for power of the wind and the water before them. They sailed because they were in search of adventure, because they wanted to show people they could do it, and because they were obsessed with traveling the open sea. But most of all this group of women wanted to dominate the competition and had they proved they skill to be  formidable opponents. They achieved in the end, even if they didn’t get what they had hoped for.

Maiden arrived to Southampton in February of 1990 and came in second place in the race. They had not won, but they pulled into a screaming crowd of fans. They had the best finish for a British boat in 17 years of the race, and also became instant legends in sailing: disproving those who had bet against them and opening the door for women sailors to believe in their abilities and to push themselves to win. 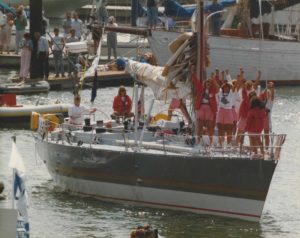 “As a human, you can go much further than you think,” a subject of the film remarks, and Tracy realized this in this journey. She speaks about battling fear and self-doubt, which for her manifested as rage and frustration. The challenge, she realized, was channeling that rage into action as the skipper, and allowing her frustration to push her beyond what she, and others, believed she could do.

Her task, firstly, was to safely navigate and command the first all women crew in Whitbread race history, but really she and her crew wanted to win the race. They were there for the competition and to push themselves as far as they could go.

While they were snubbed of the official win, the impact they made on the sailing world and on the larger sports world is incredible. This story has inspired women and girls in the sailing world, along with athletes everywhere, to trust in their own determination and to never again take “no, people like you can’t do it” as an answer.