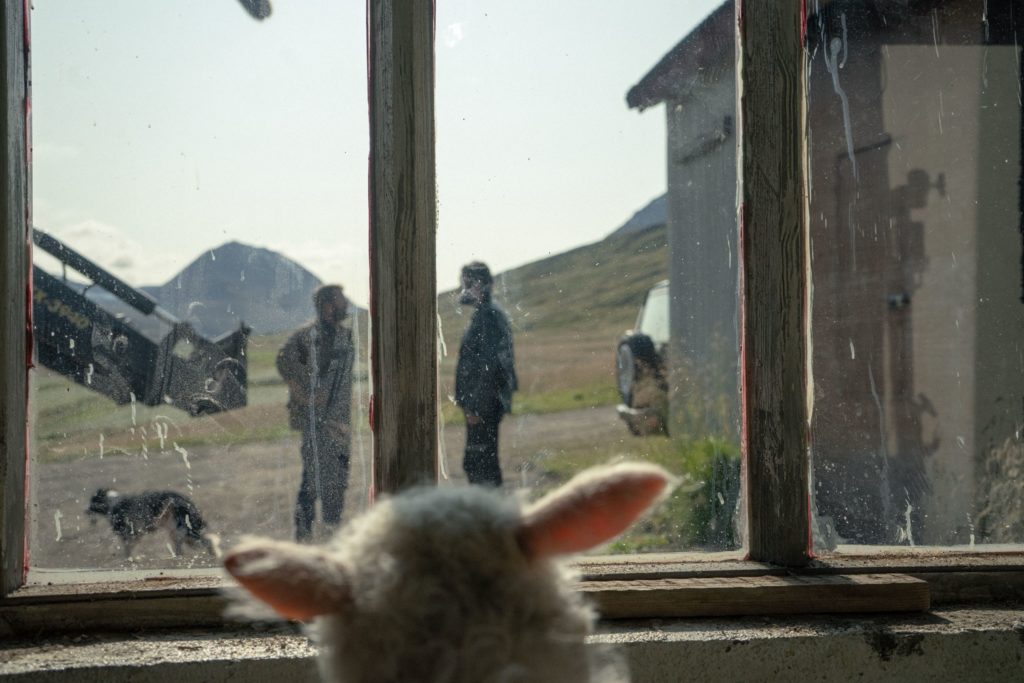 For better or for worse, the phrase “A24 horror” now rolls off the tongue of in-the-know film fans as naturally as, say, “Universal monsters.” For better, because the indie powerhouse studio has over the past decade released such truly remarkable horror stories as Hereditary, The Witch, and Saint Maud (as well as In Fabric, which for some reason has been less heralded but is a personal favorite of this critic). For worse, because the company’s branding has grown so ubiquitous that their strain of horror can be brushed off as a series of cliches: throw together some striking visuals, a few wordless, moody passages, a streak of the occult, and an ambiguous ending, the wags say, and you’ve got yourself an A24 horror movie. This characterization is, of course, unfair and reductive (not least because many of A24’s releases are acquisitions rather than in-house productions), but I suppose that’s the price of success. If you create a monster scary enough, sooner or later the villagers will grab their pitchforks.

So it was that, when the trailer for Valdimar Jóhannsson’s Lamb dropped online, most reports referred to it as “the new A24 horror film.” By the numbers, I suppose this is accurate: it does have striking visuals and lengthy quiet spells, and there is a good helping of the supernatural, and the ending is pretty damn ambiguous (it even features a familiar-looking flower crown). But Jóhannsson is playing a different game than Ari Aster or Robert Eggers. Though undeniably discomfiting, Lamb is far gentler than the average arthouse shocker, to the point where one might debate whether it is a “horror movie” at all. And while it’s ultimately a slighter film than some of the studio’s higher-profile fare, it contains images that will stick with you for a long time to come.

Maria (Noomi Rapace) and Ingvar (Hilmir Snær Guðnason) are a childless married couple, living a quiet life among the animals on their remote Iceland farm. One night, while birthing sheep, they witness something remarkable: a lamb is born with the body of a human infant (only the head and one arm identify it as a ruminant). With an almost tacit agreement, the couple agree to take this strange child in and raise her as their own (much to the chagrin of the lambs actual ewe mother, who stands belligerently outside her window). The family’s peculiar idyll is rocked, however, by the arrival of Ingvar’s ne’er-do-well brother Pétur (Björn Hlynur Haraldsson), who is understandably unnerved by their unconventional arrangement. Questions arise, of course, about the long-term viability of this family unit, but the mothering instinct is a formidable thing to reckon with– even when your “child” appears to be something out of the Barnyard of Farmer Moreau.

Before we go on with the review, first things first: Ada, the lamb-child, is absolutely goddamn adorable, and one of the most purely enchanting cinematic visuals in recent memory. The effect is relatively simple: a photorealistic lamb’s head imposed on a small child’s body (for much of the first act, we only see the face peeking out from a bundle of blankets). But there’s something immensely charming about seeing this tiny monstrosity running around with toddler abandon, handknit sweaters in place of its natural fleece, its little hoof-arm waving in the air. If Lamb is a horror movie, the horror is primarily in worrying that something bad might happen to this perfect angel of a sheep-girl. Simply put, I love Ada the sheep girl, and I could not get enough of watching this tiny, wooly joy.

As for the movie itself, I can safely say that it’s probably not what you’re expecting. Any sense that one might be settling into a conventional thriller is dispelled by the presence of legendary Hungarian “slow cinema” auteur Béla Tarr, who here serves as executive producer. Lamb is one of the quietest genre films I’ve ever seen, not just in its paucity of dialogue (the first line isn’t uttered until about ten minutes in, and even then it’s just small talk), but in its entire being. Long stretches of the film, both before and after the discovery of its title character, simply consist of Maria and Ingvar taking care of their daily chores; when Ada does come on the scene, she fits in fairly naturally. Though clocking in at a relatively modest 106 minutes, Lamb takes its time getting where it’s going, and while some I’m sure will lose patience, the journey is surprisingly soulful.

This is not to say that Lamb is some conflict-free slice of nicecore. There is an undeniable undercurrent of dread running through the picture, but much of it is communicated through the most unexpected members of the cast. Animal acting is, of course, mostly an illusion; no animal knows they’re in a movie, and the illusion of agency is placed upon them by a combination of expert training and clever editing (as well as, to an increasing degree, CGI). That said, Lamb contains some of the best animal acting I’ve ever seen. When we see the (regular) sheep cloistered in their pen, we can almost sense them conferring, debating what to do about the lost member of their flock. The family cat and dog, meanwhile, are clearly instantly suspicious, eyeing the bipedal intruder with a mix of canny skepticism and eldritch horror. There’s no dubbed dialogue (thankfully), but these animals are every bit as expressive as their counterparts in Babe or Homeward Bound. 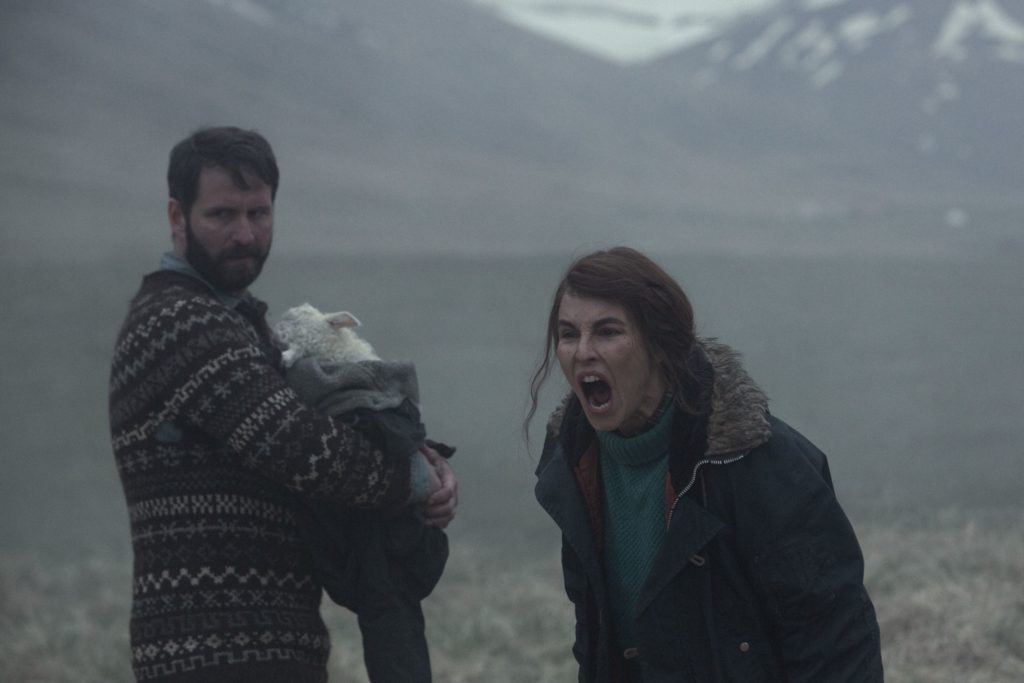 The promotional materials for Lamb as a “folktale,” and while that’s not a particularly unusual descriptor for a horror film (particularly in 2021, when “folk horror” seems to be having a moment), I was surprised at how literally it applied. Like many traditional fables, Lamb is about the strange and mystical forces at work in the unknowable expanse of nature (which is particularly evident in the chilly green tundras of Iceland). But it’s also, at its core, a morality tale. Like the folk heroes of old, Maria and Ingvar are everyday people who make a single, perhaps reckless decision. Despite their taciturn nature, we gradually develop a fuller picture of their hardships and struggles, and by the film’s end we more or less have a sense of why they do the things they do. But folktales, in their purest forms, are not character studies, but rather object lessons of the punishments meted out by the unforgiving powers-that-be (those who grew up with contemporary fairy tales will likely be shocked by Charles Perrault’s original ending for Little Red Riding Hood). Like those tales of old, the ending of Lamb sneaks up on you, and leaves an indefinable taste in your mouth.

But it also leaves you with an undeniable sense of wonder. As far as the “A24 canon” goes (if there is such a thing), I sense that Lamb will go down as a minor entry; it’s probably too low-key and whimsical to be anointed a new horror classic, and too off-puttingly weird to win over the conventional arthouse crowd. But damned if I won’t remember this strange little movie about a strange little family. Like a weird, forgotten fairy story from a dusty old book, Lamb contains moments and images which will linger in my mind for years to come.

Lastly, I don’t know if sheep can read, but: Ada, if you’re reading this, I love you very much, and I hope you’re doing well.