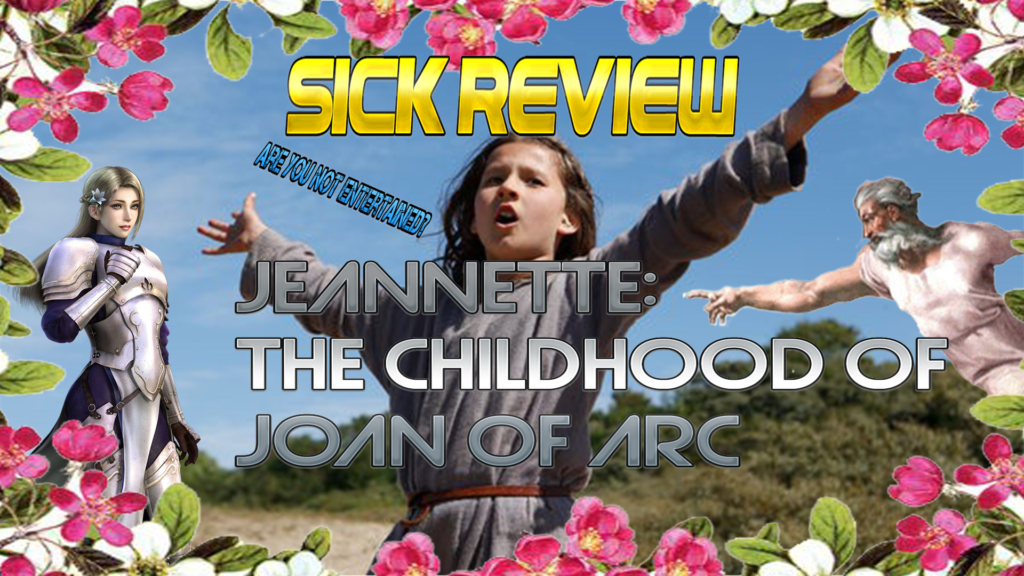 Jeannette: The Childhood of Joan of Arc — an art-house rock-opera from atheist/auteur Bruno Dumont — joins a long list of films about France’s most storied martyr. The tale is traveled: From Carl Theodor Dreyer’s The Passion of Joan of Arc — a paean to the art of bug-eyeing toward a camera — to Luc Besson’s typically over-the-top, Jovovich-led The Messenger. So Dumont flips the script. Where others were fire-and-pulpit, faith-on-trial, and tragic-endings-galore, Jeannette is comic and melodic. A slight insight into Joan’s life (Jeannette in the film) before her conquests and evolution into The Maid of Orléans.

Set in the French countryside during the Hundred Years’ War, Jeannette introduces us to Jeanne d’Arc as a child (Lise Leplat Prudhomme first, Jeanne Voisin later). Even as a youngling, Jeannette is filled with fervor and discontent. War ravages her country and no one rises up. To Jeannette, the answer is simple: Rise. (It helps that the young frenchwoman is visited by messengers of God, which call her to their bidding).

Dumont pits Jeannette against peers and nuns to test her reasoning, over time solidifying her righteousness. These arguments and apologetics are waged in verse. Ostensibly, the songs are “metal,” but they sound more like frantic outsider art. I was reminded of the earliest music by Mega Man-themed rock group The Protomen, who crafted sweeping rock songs a studio-sheen shy of Meatloaf, though all the greater for their noticeable reach.

Musician Igorrr (their extra Rs, not mine) provided the bulk of Jeannette’s backing music, stringing together absurdly fast (and fake?) double-pedal bass-drum kicks alongside Garageband-style hip-hop beats and crisp guitar noodling. These tracks are contrasted always by the more free-flowing, occasionally melodic vocal work that recalls The Umbrellas of Cherbourg. Already a dizzying cocktail, but this is a musical. There will be dancing.

Aggressive foot-stomping, methodical head-banging, and hand movements that bring to mind Jared Hess’ Napoleon Dynamite are what constitute choreography in Jeannette. Surprisingly, much like in Hess’ 2004 indie-darling, there’s beauty to be found in all this human awkwardness. It’s strange, yes, but touching if you give yourself over to it. (There’s also a character who dabs several times. No one in the theatre laughed except for my friend and I. Have fun, people!) Art that reaches beyond its grasp, toward visions of true glory only the brain could conjure, is far more moving than any perfectly plotted and arranged spectacle. It’s the same reason my mind returns to Zack Snyder’s Batman v. Superman: Dawn of Justice far more often than it does, say, The Amazing Spider-Man 2. Marc Webb’s studio-check-box Spidey flick inspires nothing; Snyder’s bombastic battle of gods has its faults, but it is ultimately riveting, epic, and, yes, ecstatic.

All this is to say that the feeling which roughshod, passionate work like BvS conveys is apt for Joan of Arc — a story about the emotional turmoil that religious interiority can bring. Because when we see Jeannette’s awkward fumbling and hear the poorly sequenced metal drumming and trap beats, though we may laugh, we can’t help but also feel the raw gesture to the unknown.

Dumont and cinematographer Guillaume Deffontaines capture this all through long static takes from a distance (soak in that landscape!), occasionally intercut with close-ups, usually when pleading toward the Lord himself. Simple, but effective. More interesting, though, is how the wide shots remind us what’s really at play here: Hey! This movie is literally just some people on a beach singing and dancing!

As it turns out, greatest of all of Jeannette‘s wonders is the reminder that movies can be documents of people going outside and creating. The energy is infectious, helping us to get easily onto Jeannette’s wavelength. The comparison to Norman Jewison’s Jesus Christ Superstar, a movie that at the top of the reel revealed to the audience what they were about to see was a show, can’t be ignored. When those hippies run out of the van and don new wardrobes, an excitement develops in the body. Though Jeannette is a leisurely paced quote-unquote “art film” with long, considered takes and minimal plotting, the joyousness is the same.

Funny enough, the two works share a deeper core: two blasphemous movies which show the wonders, delights, and complexity of belief. Better than any God’s Not Dead sequel, anyways. Take note, Kirk Cameron: if one of your stupid movies made me feel joy and reminded me why I fell in love with movies in the first place, maybe I’d pay to see them.