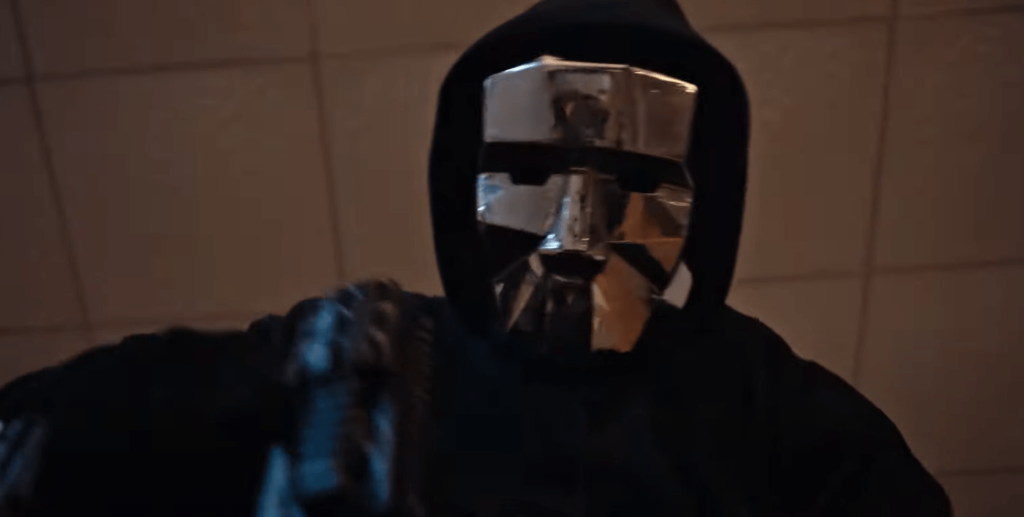 Initiation begins with a debaucherous pledge week party that ends with the seeming sexual assault of a sorority sister by the university’s star athlete. Three women, the survivor and two of her sorority sisters, are left to navigate the aftermath as best they can. As they attempt to piece together what may have happened, a brutal murder by a masked killer ignites a wave of terror across the campus.

The movie wants to explore the sexual assault and its aftermath, but it primarily uses any tension from this event to craft a slow-burn atmosphere that sets the stage for the rather uninspired slasher story that follows, with the movie focusing on the presumed cleverness of its plot as opposed to the characters themselves. This flows from the script itself, a rickety blueprint that is too amateurish and self-serious for it’s own good. And even though the movie does often act as a throwback to classic ’90s slasher whodunnits—like the epochal Scream or the campy fun Urban Legend—it lacks the wit, depth, or subversion of its predecessors, and instead veers into the rote machinations of a Law and Order episode.

It is clear that Initiation is attempting to say something about women surviving within structures built to protect men—these structures being both the horror genre and a college campus. I also do see something astute in its finale, a message of patriarchal retribution being ineffective against systemic violence against women. This whole message is undone, however, by lead “final girls” who remain underwritten, their internal emotional lives swept aside in favor of the next plot development. Connected to this is some sloppy messaging, both on the central conceit and it’s related themes. There’s a focus on cell phone communication and social media that’s certainly visualized in a smart and organic way, but is connected to a shallow statement—social media exacerbates the already tense sexual politics of Greek life? It’s a very surface-level engagement with the way people, particularly young adults on a college campus, use, abuse, or even weaponize social media. It’s likewise something the movie comes in declaring, as if that somehow makes it believable fact.

In spite of being generally underdeveloped, I do appreciate how the movie turns its feminist intentions into praxis. Gruesome kills are exclusively reserved for the men in the movie, and their lean, muscular bodies are often on display. Yet it is never as effective as I believe the filmmakers intend it to be, because the movie never takes the idea far enough or makes it too explicit. This is the movie’s fatal flaw, that which renders its story and visual presentation ineffectual: Initiation is too flat and restrained for its own good, taking the safer, boring route, where something more interesting and complex was about to be expressed or explored.

Despite my belief that Initiation is an overall failed endeavor, I am intrigued enough by it to want to see what writer-director John Berardo and co-writers Lindsay LaVanchy and Brian Fragerand do next. There are sparks of brilliance throughout the movie, and I can see a version of Initiation that plays off of the tense, confusing emotional turmoil that sexual assault ignites—both within the survivor and their community—to explore the limited avenues that women have to seek and attain justice, avenues that are usually overshadowed by the decisions of men. The movie does approach this subject at times, through realistically uncomfortable dialogue or brief insight into a character’s inner psychology, only for these moments to reveal themselves to be mere, and contrived, exposition.

Available digitally and on demand on Friday, May 7