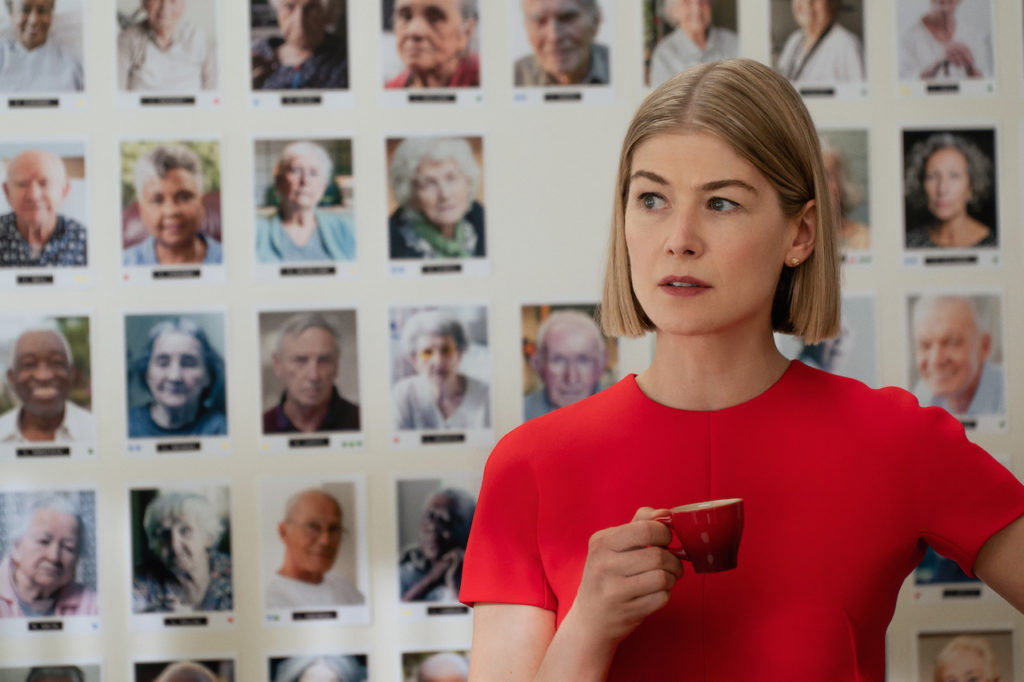 I love a good black comedy. The combination of caustic characters, a sickly view of society, and I-shouldn’t-laugh-at-that sight gags, to me, can make for a perfect night at the movies. But it’s also something of a high-risk/high-reward genre. If any one piece of the puzzle doesn’t fit– if the lead is miscast, or if it feels like the script is punching down, or if the delicate laugh-to-gasp ratio is just a hair off kilter– the entire venture can deflate. If it doesn’t have that it quality– if it isn’t funny— then, more often than not, you’re just left to hang with a bunch of awful people doing awful things in an awful world.

All of this is to say that I wanted to like I Care a Lot, the new darkly comic thriller starring Gone Girl’s Rosamund Pike. It’s got a devilishly inventive premise, and a great cast, and it’s exceedingly well put together. But somehow it just didn’t gel for me, and instead of a delicious poison bonbon, I was simply left with a bad taste in my mouth.

Pike stars as Marla Grayson, a self-described “lioness” who’s stumbled onto the perfect scam. With help from a sympathetically unscrupulous doctor (Alicia Witt, aging appealingly into a twitchy character actress), Marla zeroes in on wealthy, elderly individuals, declares them unfit to fend for themselves (regardless of their actual mental state), and has them committed to a prison-like assisted living community– with Marla as their court-appointed guardian. Marla then puts their houses and valuables up for auction (with herself as the beneficiary), and shuts out any potentially meddlesome relatives. Business is good for Marla; her roster of “clients” provides enough juice for her to run a well-staffed business, aided by her lover and attack dog Fran (Eiza Gonzalez). One day, Marla comes across what appears to be a “cherry”: Jennifer Peterson (Dianne Wiest), a well-heeled widow living in an opulent home filled with fine art and Faberge eggs. Following a well-rehearsed capture (with Marla expertly inhabiting her customary role as concerned nurturer), Jennifer is installed in her new “home,” and Marla helps herself to Jennifer’s considerable assets (including an envelope filled with undeclared diamonds hidden in a safety deposit box). What Marla doesn’t know is that Jennifer has a son, Roman (Peter Dinklange), who happens to be a ruthless gangster and drug runner. When Roman finds out about his mother’s predicament, he sets his sights on Marla, setting the stage for a showdown between two seemingly unstoppable forces.

Like Promising Young Woman, I Care a Lot cloaks its darker elements in a sickly sheen; Marla calmly narrates her misdeeds over brightly colored visuals, propulsive montage, and slickly produced beats (the film is set and shot in and around Boston, yet manages to feel incredibly LA). Unlike that film, however, which is driven by an intense, personal fury, I Care a Lot lacks a particular point of view. It is set up to be a scathing indictment of the nursing home industry (I have no doubt that there are plenty of Marla Graysons running loose in this country), but once the premise is established and the scope of Marla’s business is revealed, director J Blakeson seems to lose interest, instead shifting gears towards a more traditional darkly comic action thriller. Once the bullets start flying and the bodies start piling up, it’s easy to forget about all the other faces on Marla’s wall of intake photos.

Part of the problem is that the gangsters seem to be acting in a different movie from Pike and Wiest. Dinklage is a fine actor, whose glower and sonorous voice position him as a great comic straightman, but here he seems to be hamming it up just a little too much; whereas Marla feels all too much like a character you might meet in real life, Roman and his underlings wouldn’t be out of place as villains in a Happy Madison production (it must also be said that, while the issue of Dinklage’s physical stature is never addressed, it’s hard to shake the feeling that he’s being deployed at least partially for novelty value, in much the same way that Dinklage’s character railed against in Living in Oblivion so many years ago). I Care a Lot wants to be a searing indictment of our times, but that impulse is somewhat at odds with the fact that the villain is, in essence, Snidely Whiplash.

It’s also at odds with the fact that the villain is not Marla Grayson. Marla is, by any metric, an awful person, who has succeeded in a corrupt system through truly despicable means. To be clear, I’m not saying that a character like Marla can’t be a fascinating protagonist; again, I love a good anti-hero, and a truly great black comedy can have the viewer rooting for a truly deplorable character. The problem here is, once the gangsters show up, the film seems to lose track of the fact that Marla is an anti-hero, positioning her as a conventional action heroine protecting herself and her loved ones from wave after wave of bumbling hitmen. Which, again, can absolutely work in the right hands (Breaking Bad kept it up for years), but by the time we see Marla fight her way out of a car plunged into the bay, we’ve kind of lost track of the “corrupt nursing home” angle. 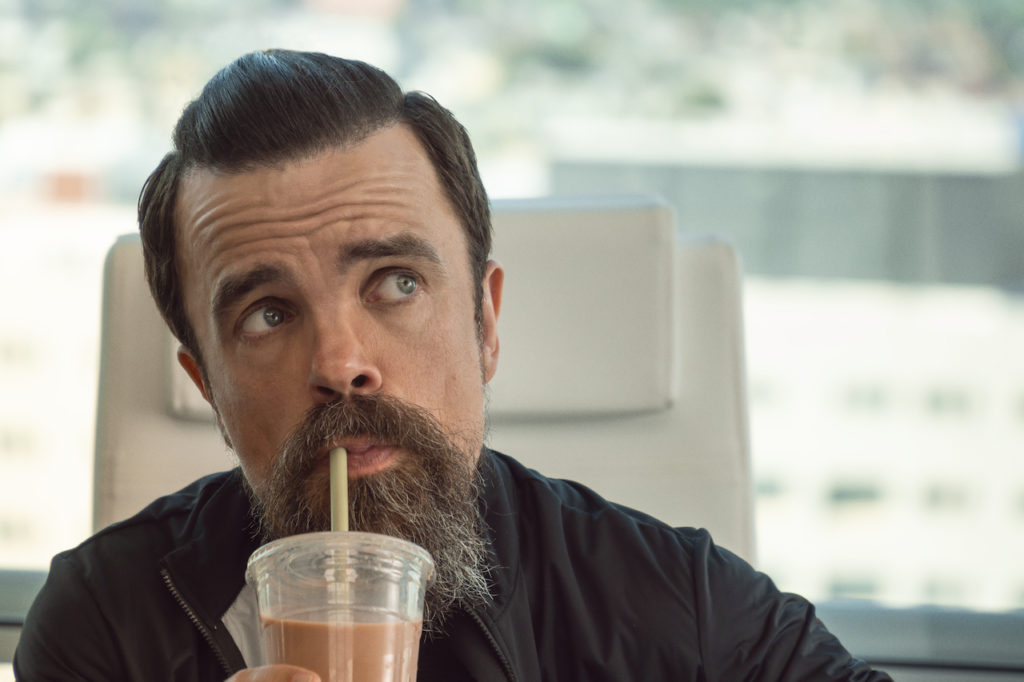 To be fair, when I Care a Lot works, it can be electrifying. Pike, of course, is excellent as the deceptively ruthless Marla, playing her with the eerily comforting charm that should have already made her a huge star by now. Wiest is even better as the wily Mrs. Peterson. The film’s best scenes are the ones which pit these two forces of nature against each other, each sizing the other up and angling for the upper hand from behind beaming, plastic smiles (the moment when a heavily sedated Peterson says, with a warm, matronly chuckle, “You fucked up, bitch,” made me belly laugh). A better film might have trusted these two to carry a smaller story, with two master manipulators facing off amidst the blandly Kafkaesque world of corporate elder care. By instead centering the story on mob goons and contraband McGuffin diamonds, one can’t help but get the sense that the filmmakers flinched.

In many ways, I Care a Lot feels like the quintessential Netflick. With its driving beats, memeable moments, and ripped-from-the-headlines outrage, watching it feels remarkably like watching a made-for-streaming true crime miniseries (it also, at just under two hours at length, feels a little like a self-contained binge watch). But like those series, once the endorphin rush wears off, it’s tough to shake the sense that there’s not much underneath the glossy exterior, and that the whole endeavor is more than a little mean-spirited. I Care a Lot clearly strives to be the sort of black comedy that speaks to the anxieties of its generation, like Thoroughbreds or the previously mentioned Promising Young Woman. Instead, it recalls such ‘90s exercises in post-Tarantino nihilism as Very Bad Things. Like those films, it will serve as a time capsule, but probably not in the way its makers intended.