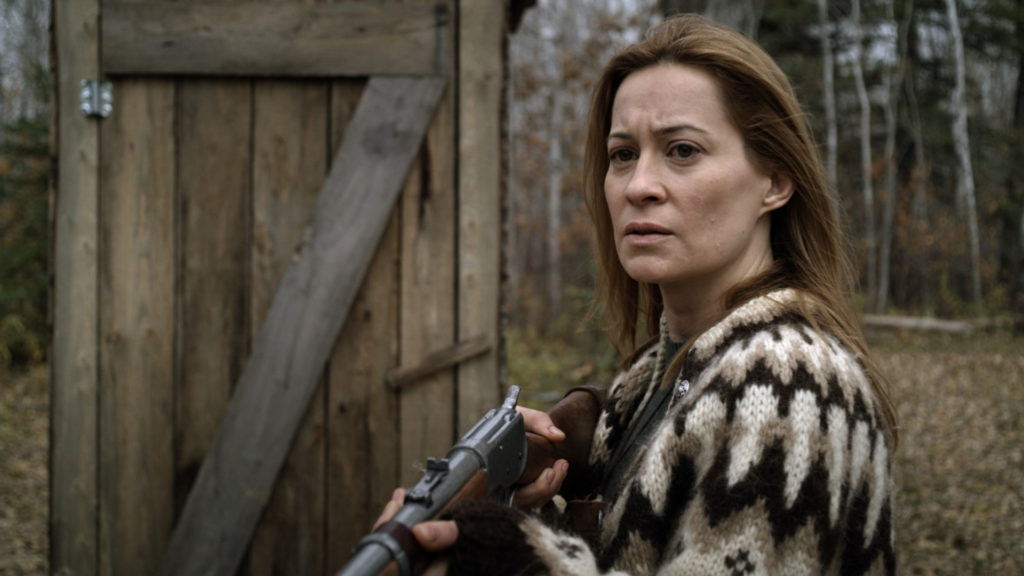 Shawn Linden’s Hunter Hunter is disconnected from itself. The film takes a while to get moving, and once it does, the pacing and characterization are solid. However, Hunter Hunter has a major stumble towards the end that makes it difficult to have any real feelings towards the movie at all.

Joe (Devon Sawa) is a third-generation fur trapper living in the Canadian wilderness with his wife, Anne (Camille Sullivan), and tween daughter Renee (Summer Howell). Despite money troubles and Anne’s desire to move them to a town where Renee could go to school, Joe is adamant that they will continue to live off the land, even though the land isn’t providing this season. There’s also another danger: a lone wolf that’s eating the animals caught in their traps.

Joe decides to go after the wolf, leaving Anne and Renee to hold down the fort at home. When he goes missing a few days later, they investigate further and try to get the local wildlife police involved, but have no luck there, due to issues of jurisdiction. Eventually, they take in an injured photographer (Nick Stahl), but something’s strange about him too.

It should be said that the film’s setting and score (music by Kevin Cronin) are beautiful. They work together to truly showcase the beauty of the Canadian wilderness. (Hunter Hunter was mainly filmed in Manitoba.) As the stakes ramp up, the score gets lower and darker, matching the plot beat for beat.

Joe isn’t in the film much after the first third, so Anne becomes the de facto main character. Camille Sullivan is masterful in this role, and Summer Howell is definitely someone to watch in the future. Renee is the bridge between her parents, and that’s a lot to put on a young actress’s shoulders; luckily, Howell handles it well. Nick Stahl’s character, however, is not what he appears to be, which takes the film in a completely different direction than expected.

Hunter Hunter’s use of oblique camera angles occasionally made it difficult to see what exactly is happening or what the characters are seeing. Overall, it’s hard to know what the filmmaker’s intended message was with this film, particularly considering its shocking ending. Overall, the film has a decent middle after a slow beginning, but ultimately swerves in a way that threatens to take its foundations out from underneath it.