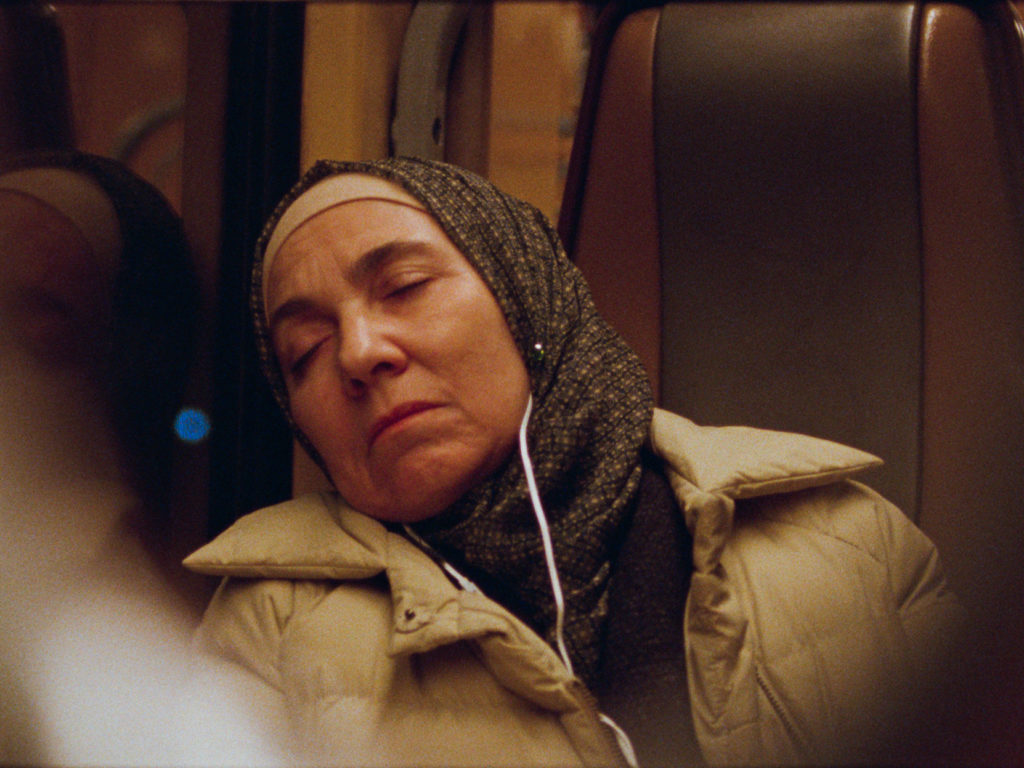 Some things can only happen at night, as evening cleaner Khadija (Saadia Bentaieb) discovers in Bas Devos’ 2019 film Ghost Tropic, which he also wrote. It’s the best kind of small film (in French and Dutch, with subtitles), one where the events are confined to a single night, but the film still showcases the beauty of a modern city in darkness.

Khadija boards the metro after a long day at work, and accidentally falls asleep, only waking when the train has run its course to the end of the line. After a series of attempts to quickly get home fail, she decides she must cross Brussels on foot to reach her apartment. The journey reveals surprising encounters that illustrate modern Brussels, with all its helpful and unhelpful strangers.

Bentaieb plays Khadija as a quiet woman with pride. She eventually reveals to a gas station attendant (Maaike Neuville) that her husband died ten years ago, she has a teenage daughter who lives with her, and an adult son who lives alone. She wants to help people, but has her limits. There’s a particularly arresting scene where she happens upon a house where she used to work, only to find a squatter. Wordlessly, he asks her not to betray him, and she agrees. In a conversation minutes later with the neighbor, Khadija figuratively draws a line when he abruptly asks her if she still cleans houses. She tells him that she cleans for a company now. In one question, he reveals that because she’s an immigrant woman in a headscarf and has admitted she’s a cleaner, it’s the only role he can now see for her. Any other parts of her identity have been erased for him, simply because of where he found her, her appearance, and her occupation. It’s a well-done moment in a tightly written script.

Throughout the night, Khadija asks for help from those she finds, as well as gives it to those who cannot ask for themselves, such as a dying homeless man (Guy Dermul) she finds on the sidewalk. The film’s sparse screenplay helps these authentic encounters move Khadija’s journey forward, as she converses with a night guard and a nurse, and spies on her daughter, out with friends. The film feels like an accurate reflection of Brussels now, with the audience getting a peek into one woman’s adventurous night.

Brussels is shown through the superb cinematography by Grimm Vandekerckhove. The scenes fade in and out, so slowly it seems like a dream. In particular, the way daylight fills Khadija’s living room is wondrous. The sound design, by Boris Debackere, is phenomenal as well. Ten minutes in, as Khadija rides the train, the sounds of the metro nearly overpower the viewer, even as she falls asleep, showing her familiarity. However, when she wakes after the train has stopped, so does all sound. The night is unfamiliar to the viewer from then on, but for the first time, it’s unknown to Khadija as well.

Right now, Boston’s most beloved theaters need your help to survive. If you have the means, the Hassle strongly recommends making a donation, purchasing a gift card, or becoming a member at the Brattle Theatre, Coolidge Corner Theatre, and/or the Somerville Theatre. Keep film alive, y’all.
Liked it? Take a second to support BOSTON HASSLE on Patreon!