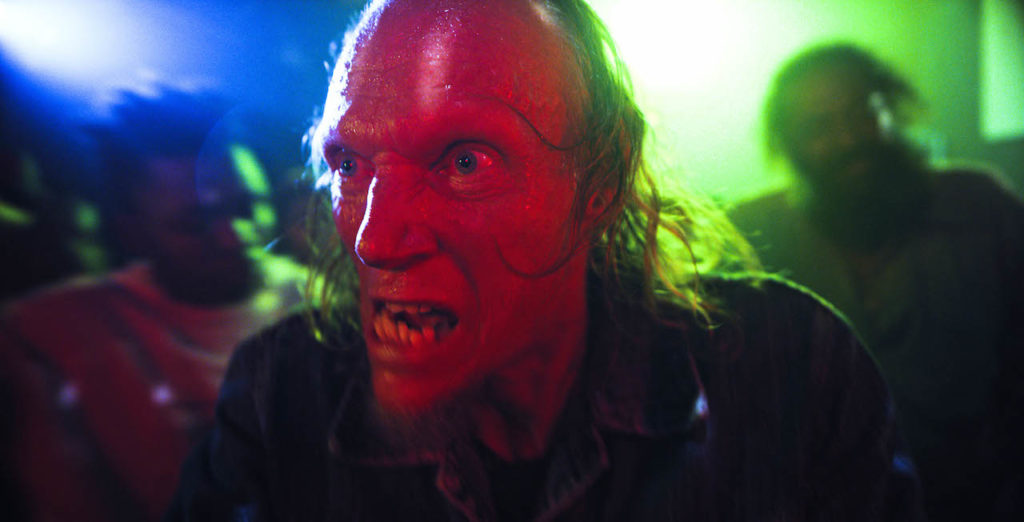 Few pieces of entertainment proved as necessary a balm in 2020 as Steve McQueen’s Lovers Rock. Released as part of McQueen’s Small Axe anthology at the height of the pandemic, the hour-long film places us smack dab in the middle of a reggae-infused house party in the middle of 1980s London. There is a story– a young woman arrives, has a fight with her friend, stops an assault, and perhaps finds true love– but it’s largely incidental to the sensuous manner in which McQueen lets us feel the party. Arriving as it did during a time when partying was more or less verboten, the film served as a salient reminder of what the communal experience was like, and the joys which would await us on the other side of this thing.

Flash forward to the spring of 2021. As vaccines roll out, numbers drop, and venues reopen, it’s beginning to look like (knockveryfuckinghardonwood) we may be approaching normality. Releasing on Shudder on the brink of this potential turning point, Fried Barry feels in some ways like the anti-Lovers Rock. An almost indescribably weird slice of gonzo from South African music video director Ryan Kruger, Fried Barry makes the prospect of returning to the world and interacting with strangers seem like an absolute fucking nightmare.

Barry (Gary Green) is a lowlife junkie living on the bad side of Cape Town, careening from alley to dive bar to basement in search of skag and skag-money, and only occasionally returning home to his harried wife Suz (Chanelle de Jager) and their oft-neglected son. One night, after stumbling out of a drug-buddy’s dingy flat, Barry is abducted by aliens, very, uh, graphically probed, and released back into the wild. The Barry that returns, however, is not quite the Barry that left: dazed, monosyllabic, and almost certainly possessed by some sort of alien visitor, Barry is left to navigate the already-alien-seeming landscape of Cape Town after dark. 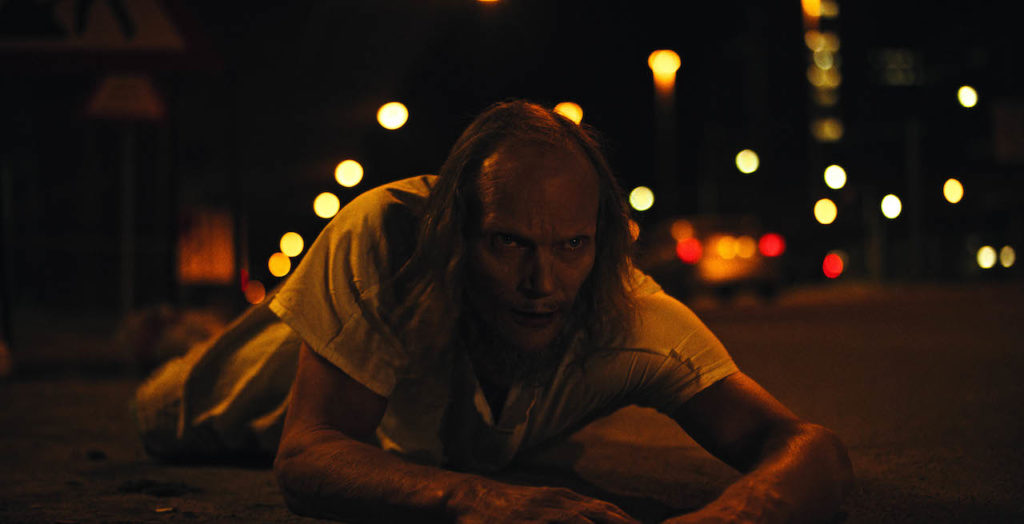 I’m not quite sure to whom I would recommend Fried Barry. A little of its unremitting ugliness can go a long way, and its sustained tone of psychedelic discomfort can quickly grow exhausting (at one point I was sure I was nearing the end, only to be met with a title card announcing “INTERMISSION”). The film’s portrayal of women as mindlessly carnal beasts would feel misogynistic if its view of its male characters wasn’t even dimmer and grimier. The episodic and occasionally whimsical nature of the plot is occasionally at odds with the darkness of the subject matter, and feels particularly ill-suited to a mid-film encounter with a serial child predator. The whole thing is willfully, adamantly unpleasant, and if you’re not in the exact right mood for it, you’ll probably find yourself inching toward the remote within the first 20 minutes.

And yet I’m pretty sure I… liked it? Kinda loved it even, maybe? Whatever your opinion of it, there simply isn’t much on this planet remotely like Fried Barry (the opening credits even acknowledge as much, announcing the film as “A Ryan Kruger Thing”). From its first frame, Fried Barry is as twitchy and restless as its protagonist. The dizzying, neon-drenched cinematography (frequently focused on Green’s chiseled, bug-eyed visage– more on that later), the constantly swirling synth soundscape by South African DJ/producer Haezer, and the all-around pervasive skeeziness create a uniquely stressful atmosphere, pitched somewhere between Uncut Gems and a 97-minute version of the video for “Smack My Bitch Up” by Prodigy. If Fried Barry were a person, and you were on the train with it, you’d get up and move to a different car between stops.

Much of Fried Barry’s otherworldly malevolence springs from the casting of its leading man. My research tells me that Gary Green has been a stuntman and extra (as well as, astoundingly, a blue jean model) for the past couple of decades, but, based purely on empirical evidence, I have a hard time believing Kruger didn’t simply discover him in a dark alley and roll cameras. With his gaunt, leathery features and herky-jerky physicality, Green doesn’t quite seem human even before his abduction; imagine if Ray Harryhausen created a stop-motion puppet from the mummified corpse of Michael Shannon, and you’ll be in the right ballpark. On paper, Barry doesn’t exactly do much but bounce from one situation to another, occasionally parroting lines like a dirtbag Dougie Jones, but Green’s perversely magnetic presence goes a long way toward carrying the movie. 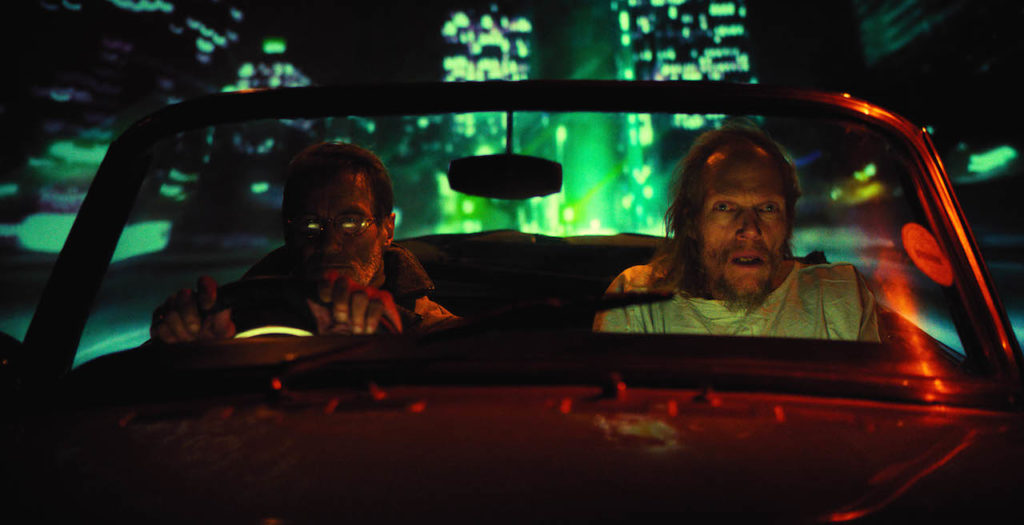 Indeed, between Barry’s unmistakable features and the outlandish circumstances of his misadventures, Fried Barry often feels less like a movie and more like a comic book– not the capes-and-tights stories currently dominating the cultural landscape, but the transgressive, underground comix that thrived from the ‘70s through the ‘90s (and beyond). Just as those books served as an outlet for the raging ids of such creative madmen as R. Crumb or Vaughn Bodē, Fried Barry appears to flow uninhibited from Kruger’s subconscious. In this context, its wild swings from absurd humor to ugly nihilism become somewhat more palatable. Occasionally, the film abandons narrative entirely: consider the scene in which Barry discovers a walkman and dances, then literally flies around the city for several minutes, before kindly slipping the headphones onto a dying man begging for medical assistance. Like much of the movie, it’s silly, violent, and ultimately exhilarating.

In case it’s not obvious, Fried Barry will absolutely not be for everyone; it will, perhaps, not even be for most. However, to those on its peculiar wavelength– ideally, who stumble across it very late at night, slightly altered, and turn the volume way up– Fried Barry may well become an enduring favorite. In a time when Hollywood product is increasingly homogenized, Fried Barry is unabashedly its own thing: visually inventive, deliberately abrasive, and dreamlike in the most menacing way possible. It may be a while before things get fully back to normal, but at least we have Fried Barry to remind us what it’s like to have a truly awful night out.