Based on a true story, Everybody’s Talking About Jamie brings us 16-year-old Jamie New, who dreams of nothing more than to become a drag queen. On the one hand, he has the full support of his loving mother, but on the other, he has an absent, inattentive, and homophobic father who despises who his son has become. On top of that, he is heavily made fun of at school for being effeminate and gay, with bully Dean Paxton calling him a “freak show.”

In this way, the film talks about how traditional masculinity is not only heavily rewarded, but how men’s “success” in it is attached to their senses of self-worth, while people who adhere to gender nonconforming masculinities are ostracized. This is seen when Jamie’s father is proud of him only when he’s being a “manly” man or doing “boy things” and when it is consistently shown that Jamie suffers from low self-esteem.

However challenging are the trials he must go through, Jamie aims to come out as Mimi, his drag persona, for prom night at his school. And that’s where his adventure begins. So, this coming-of-age film is not only about Jamie’s journey self-love and self-acceptance, but also about him stepping into his personal power without the need for his father’s approval. 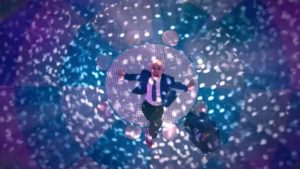 Honestly, while the film dealt with tons of issues that I’m very passionate about, it didn’t really do it for me. The music wasn’t very catchy and I didn’t enjoy some of the songs.

As for one of the scenes, it just didn’t sit well with me when Jamie kissed Dean Paxton on the lips when they were fighting. I just feel like it was wrong from Jamie’s part, to say the least.

However, it’s a funny film, with Jamie constantly cracking pop culture reference jokes. It’s a feel-good movie. But I also feel like it’s an all-feel-good movie. It doesn’t illustrate the hardships of the queer and drag community enough, maybe because it wanted to focus more on the joys and triumphs of the community, which I get, but I just feel like it glossed over the hardships and just sort of forced the audience to move on from the horrors of the ’80s to ’90s AIDS era too quickly.

It felt like it was point-blank explaining (and educating about) drag to the heteronormative scene. So, for me, being a gender studies minor, it felt like explaining addition and subtraction to a physics major.

In conclusion, I would say that after watching the trailer, I really was expecting more. And I was left wishing that things had been a even more flamboyant and queer than they were. But I don’t know, maybe the world wasn’t ready for it because, and I don’t say this in a condescending manner, the world is still taking baby steps towards learning about, understanding, and accepting the queer community.

Now playing at Coolidge Corner Theatre and available on Amazon Prime Video on 9/17!