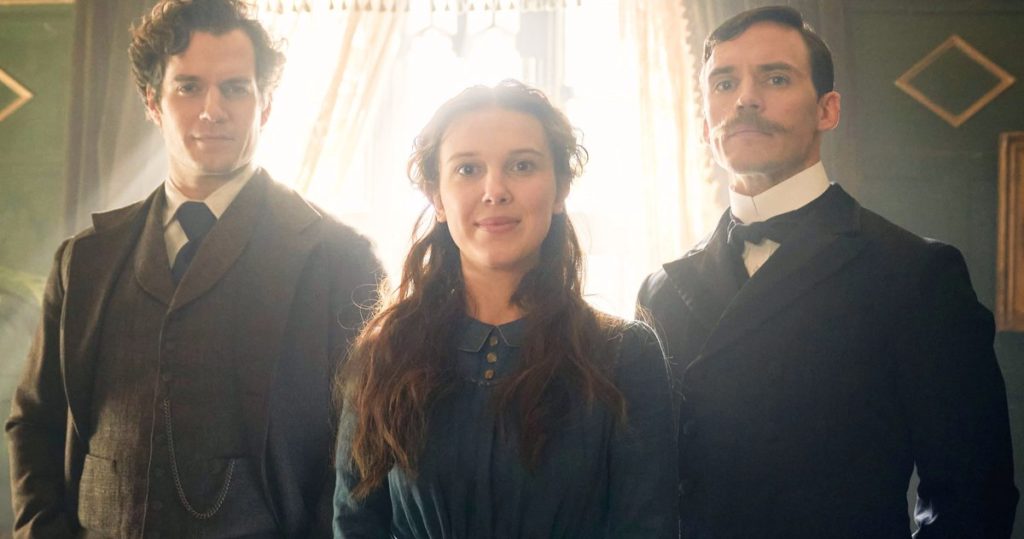 Enola Holmes is quite like Enola herself: inventive but with room to grow. Directed by Harry Bradbeer and starring Millie Bobby Brown (Stranger Things), this film does well with its intrepid teenage detective.

Enola (Brown) is sixteen when her mother disappears. She evades her older brothers, Sherlock (Henry Cavill) and Mycroft (Sam Clafin), since they mean to place her in boarding school, and escapes the house she grew up in to head to London and search for her mother (Helena Bonham Carter). Along the way she runs into a lost marquess (Louis Partridge) and a secret plot involving explosives and the House of Lords. Ultimately, the film (based on a series of novels by Nancy Springer) comprises two mysteries: where has Enola’s mother gone, and who is trying to murder the young marquess?

Brown plays Enola as a precocious, intelligent teenager. Her immediate goal is to find her mother, knowing that she wouldn’t have just left her behind without clues. Throughout the film, Enola uses the skills her mother has taught her to succeed. Her brothers are both much older than her, and they don’t know each other well. Mycroft in particular has no desire to learn anything about his sister, and is a fairly typical obstacle to Enola’s plans. Clafin is perfectly fine in this role, though the generic nature of his character is a disappointment considering his intelligence in other versions of the Holmes’ story. On the other hand, Cavill’s Sherlock is intriguing. He finds Enola both intelligent and interesting, and attempts to actually form a relationship with her as they cross paths throughout the film. Enola is at first determined to set off alone on her journey, but quickly runs into a marquess – Tewksbury (Partridge) – on the train to London. The two aid each other in their respective mysteries, and the actors play off each other well.

The film breaks the fourth wall as Enola continually addresses the viewer throughout. This technique adds to the informative and jaunty tone. It also lays out just what Enola has learned throughout her journey. The opening uses a lovely yet sparse art style to explain the Holmes’ family tree. These elements inform the viewer of what type of film is in store and bolster the film’s quirky tone.

Overall, Enola Holmes is a delightful piece, though not without a few rough edges. A few plot threads are left dangling, possibly in hopes of a sequel, and therefore don’t fit together as expertly as they should. However, with a charming heroine at its center, Enola Holmes is sure to succeed.