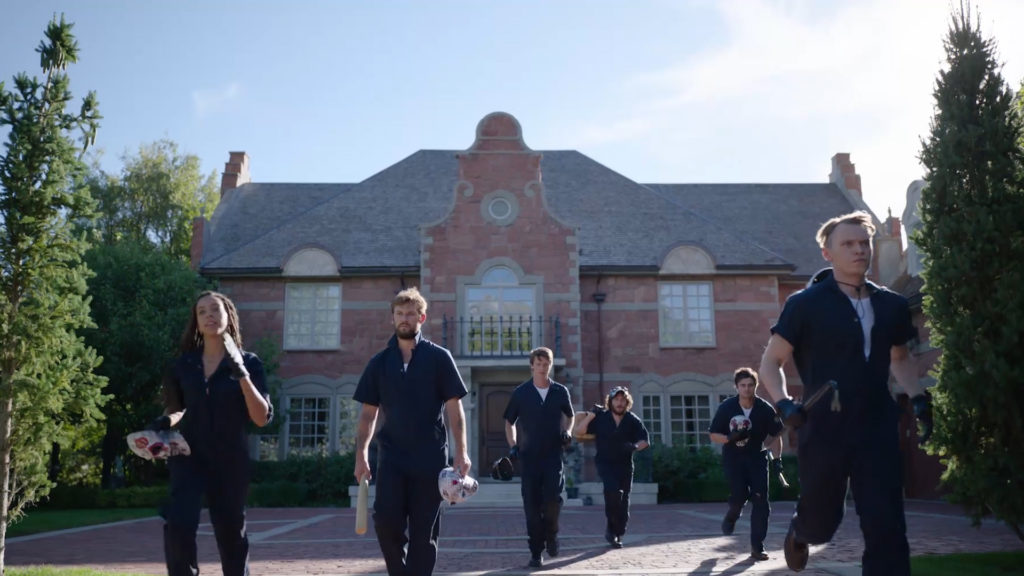 There’s a moment in Seth Savoy’s new film Echo Boomers (so named because millennials ‘echoed’ the Baby Boomer generation) where everything shifts, and suddenly everything is new with possibility. It’s impressive for a debut director, and for a film that doesn’t distinguish itself much in the first act.

Recent college graduate Lance (Patrick Schwarzenegger) comes to Chicago because his cousin Jack (Gilles Geary) has offered him a job in acquisitions, or so he thinks. Lance has dreams of owning an art gallery but doesn’t have any leads on a job, and is in debt to boot. As it turns out, Jack’s “business,” along with four other graduates, is stealing the belongings of Chicago’s rich elite and profiting off the overseas sales. Mel (Michael Shannon) is their seller who, with the help of a corrupt officer, provides addresses of people to rob. Though initially reluctant, Lance soon sees the personal gain of such a system and joins in. However,  as with most get-rich-quick schemes, the good times can’t – and don’t – last.

The main characters act on the assumption that they have gone to college and borrowed thousands in loans for, ultimately, nothing. We have done everything we were supposed to, Ellis (Alex Pettyfer), the team’s leader, tells Lance on their first night out after a robbery. Therefore, they stick it to The Man by destroying the homes of one-percenters, despite the fact that these people have little to no stake in social welfare. The script uses voiceovers to try to justify the characters’ actions with explanations of their childhood trauma, but it mostly feels trite and unoriginal.

Schwarzenegger plays Lance as a wide-eyed ingenue who just can’t get a job in his chosen field. In a way, his journey is the most interesting, because he truly takes on the values the rest of the group is trying to teach him, leading to an absolutely killer last line. He dispenses them as lessons to the writer who is taking down his story in the framing device. The best things in life are expensive, is one such pithy statement. The other members of his team espouse the same beliefs and change little as characters as the story goes on, despite circumstances and betrayal changing the game.

Echo Boomers has a cynical view of society, one that is borne out by the main character’s descent into thievery. Ultimately, Lance’s journey is the most interesting, and even that isn’t saying much.

Playing in theaters, on demand and digital now.