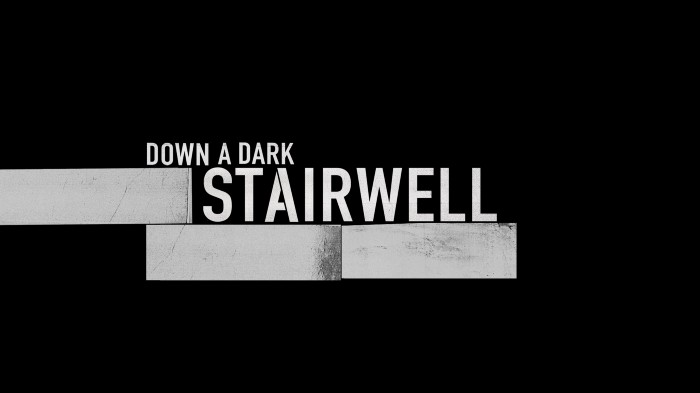 Though one of a movie’s main purposes is to visually show how a story unfolds, director Ursula Liang’s choice in titling her film as such implies an emotion that feels harrowing and somehow endless. The location, a pitch-black stairwell of a housing project, is where 28-year-old Akai Gurley was killed by NYPD officer Peter Liang. The crux of Down a Dark Stairwell, however, elevates beyond illuminating the body outline and the legal percussions; there is a complex dimension when minorities are placed at odds with each other. In between tearful confrontations, the repetitious shots of cement walls, dim hallways, and an arrow pointing to the stairs can make it feel like we’re stuck in a place that we don’t want to be in.

During a “vertical patrol” (in which police officers secure floor levels by going up and down the stairs) in November 2014, Officer Liang unintentionally fired into the dark, where his bullet ricocheted against the wall and killed Gurley. Not too long ago that summer across the Bay, Eric Garner was choked to death in Staten Island. A failed conviction and five years later, the officer that performed the prohibited chokehold was finally fired. Here, then-Brooklyn District Attorney Ken Thompson had promised a thorough investigation. Officer Liang was soon indicted with second-degree manslaughter, along with other counts relating to negligence and misconduct. The victory almost feels like a cinch, but for the Asian American community, white supremacy hails again in a different form.

Director Liang (not related to the officer) purposefully selects the voices and screen time in Down a Dark Stairwell. It is less about rifling through testimonies and evidence of a prosecution case, and more about the conflict of accountability wedged between two minority communities — one who wants to imprison Officer Liang and one, primarily of the Asian American community, who feel that using an Asian American as the “scapegoat” for police brutality is wrong, too (a prominent sign, “One tragedy, two victims,” is shown during one of these protests). When Liang was indicted, protests from the Asian American community erupted across the nation, leaving one to wonder why, in this rare occasion of mobilization, it’s for a police officer’s bloody hands.

As an Asian American, there is a complexity that Stairwell frames without pinpointing. At a pro-Peter Liang protest, two people seem like they’re about to rattle off the ways that the Black and Asian communities have not been there for each other. Quite so, it’s painful to watch protests pitted against each other: one for justice of another Black life lost, another for the way a POC has been mistreated (as the documentary concludes, Officer Liang is the only NYPD officer that has been convicted of a police-related killing in over a decade). But for Asian Americans, there is a need to recognize that inequality pervades between groups of color. I finished the film with the same conviction that I had when I started, but the documentary captured a phenomenon that rarely happens in America: the large mobilization of the Asian American community for a social issue. We find how groups of strangers can be brought together on the streets, in group meetings, family homes, and fundraisers.  Stairwell doesn’t provide an answer for the Black and Asian American communities against whiteness, but it nudges us to remember that we shouldn’t have to be alone in the dark to figure this shit out.

Premieres via ArtsEmerson on Friday, February 5 at 7:15pm! Part of the Shared Stories Film Series, contributed by BAAFF, BLIFF, RIFF, and ArtsEmerson. There will be a livestreamed conversation with director Ursula Liang and editor Jason Harper following the premiere, moderated by UMASS Boston Professor Denise Khor.

In addition, it will be featured on PBS’s Independent Lens on April 12 @10PM!