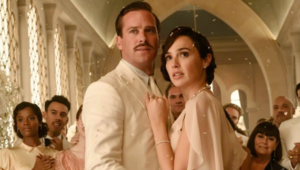 Death on the Nile is Kenneth Branagh’s second adaptation of Agatha Christie’s works, following 2017’s Murder on the Orient Express. Featuring a CGI-heavy backdrop and a glittering but talentless, problematic cast littered with big Hollywood names, this cartoonish take of the whodunnit struggles and eventually sinks.

Though many will try to separate these characters from reality, seeing Armie Hammer, Gal Gadot, and Letitia Wright all in one shot did admittedly sour Nile‘s tone from the get-go. From allegations of Hammer’s cannibalistic fetishism, physical and emotional abuse, and rape (which he has denied, but have since blacklisted him in Hollywood) and Gadot’s mindless comments on Palestine and her tone-deaf Imagine video, to Wright’s recent promotion of anti-vaccination rhetoric, you are left feeling unsettled. Notably, the decision to not reshoot Hammer’s scenes—which are, for the most part, overtly sexual involving both female leads—was disappointing and tasteless.

But that’s not why it’s a poorly-made picture.

At least, not entirely.

Nile begins with Belgian sleuth Hercule Poirot, played by a ridiculously mustachioed Branagh, whose French accent (along with Annette Benning and Hammer’s over-the-top British ones) makes it evident that there was no dialect coach on set. 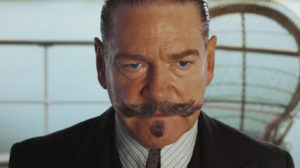 We are given a glimpse into Poirot’s past, in which he saves his fellow soldiers in the trenches of Belgium during World War I. Despite saving them, there is a massive explosion after a wire is tripped, causing irreversible, deep scarring across Poirot’s cheek, lips, and chin. When he tells his wife Katherine that there is no way that she can love him after this, she assures him that he’ll just have to grow a mustache. Problem is, Branagh, hair doesn’t naturally grow in scar tissue because there aren’t any hair follicles there.

When we jump forward in time to 1937 London, Poirot’s a famous detective who has a multi-layered mustache. His cheeks and chin no longer have the deep, horrific scars that we’ve just seen—but don’t worry, the mustache was probably covering them, too (insert eye roll here). The lack of detail is, unfortunately, appalling for such a large-scale production.

We’re introduced to Linnet Ridgeway (Gadot, playing herself as always), a self-centered heiress and childhood friend of Jacqueline de Bellefort (Sex Education‘s Emma Mackey). Jacqueline introduces Linnet to her husband-to-be, Simon Doyle (Hammer), and in the short span of six weeks, Simon has run off with Linnet.

The couple honeymoon in Cairo on a weirdly colonialistic holiday in which they invite a group of wacky, unlikeable guests, none of whom Linnet truly trusts. The couple and their ragtag crew are carefree, conceited, and run around Cairo like loud, unruly teenagers. Simon tries to have sex with Linnet on top of Ramesses II’s tomb. Sorry, how am I supposed to empathize with these people while I watch them desecrate Egyptian graves? 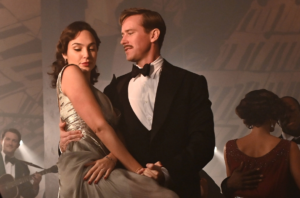 Things grow sinister when Linnet and Simon realize they are being stalked by Jacqueline, who vows to win Simon back. To escape from her, Simon hires a large boat to take his new bride and their guests onto the heavily CGI-ed Nile River. On the first night, Linnet is shot in the head, and everyone becomes a suspect. Simon looks to Poirot for help. But why should I care who shot Linnet when the script has made her into a nasty, fiancé-stealing bore?

The poor characterization of Poirot, the CGI-ed everything, and Gadot’s vapid performance in contrast to Hammer’s overacting created an obnoxious, shallow film that could not be saved—even if you threw it a life preserver.

Opens Friday, 2/11 in theaters everywhere (though the Hassle recommends the Somerville or your local independent multiplex).