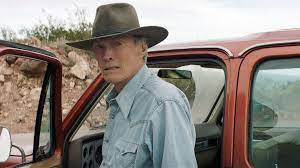 WARNING: The following article contains spoilers
Cry Macho is about Michael Milo (Clint Eastwood), a widower and ex-rodeo rider from Texas who broke his back on the field and lost his sense of purpose. Now a recovering  alcoholic and drug abuser, he is sent on the adventure of retrieving his boss’s 13-year-old son Rafael from his abusive mother in Mexico City. However, this isn’t without its challenges. Rafael’s mother is a very powerful woman who’s willing to imprison Mike in order to keep her son in Mexico.

On their journey, Mike grows closer to Rafael and in turn, teaches him how to be a good man.

But what does it mean to be a good man? Well, for one, the gender expectations for men include having them required to be brave, strong, tall, virile, young, and finally, “macho,” which is a word used very often in the film.

In this way, the film brings us a dialogue on toxic masculinity, with repeated instances where men (and women) criticize other men for not being “macho” enough. This first happens when Mike calls his boss a “small, weak, and gutless man,” when Mike gets laughed at for being too old, and when Rafael tells him that “[he] used to be strong, now [he’s] nothing.” So this movie helps us see that masculinity is sold as a place, system, and way of living where white, heterosexual “macho” men are considered the peak in a patriarchal society, and anything outside of that norm is considered inferior.

However, Mike doesn’t teach this to Rafael. Instead, you see Mike model what masculinity should be by being a compassionate, kind and protective man to people around him that he cares about, offering us a beautiful alternative to toxic (otherwise known as hegemonic) masculinity.

Additionally, the film brings us the story of a man, Clint Eastwood, who’s been considered the most macho of them all since his appearance in many a Western over the course of his acting career, but who is now challenging his own image, the entire Western genre, and toxic masculinity itself. 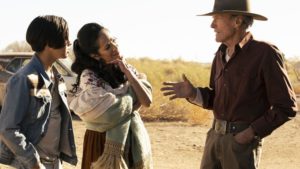 Honestly, this was such a fun movie. It’s a comedic and thrilling adventure, and wholesome at the end.

The soundtrack is GOLD. Not only was it very fitting, highlighting the country’s nature and scenery with what I call “soulful country music.” but I swear I was dancing to the Spanish/Mexican songs in my seat while watching this. It even kinda made me like country music (which I honestly kinda hate).

Although I feel that most people would complain about the small amount of action in this movie (which is typical of a Western), since Eastwood is challenging the genre, it wasn’t really necessary to have the staple duels and gunfights found in the genre. However, it really does find ways to grab your attention with the beautiful scenery, crisp sounds, plus soulful music characteristic of Western movies.

This has been one of the best movies I’ve watched in a WHILE. It teaches us about toxic masculinity AND brings us a happy ending that we all need during these depressing times.

However, I do have to say that the acting was a little stale and even a little too fake. But other than that, I see no faults.

Final review: I haven’t left a theater feeling this satisfied in YEARS.

So go watch this movie.

I promise that although you may have a just a bit of mixed feelings about it, you won’t regret it.

Now playing in theaters (including the newly reopened Somerville Theatre!) and available on HBO Max

Local journalism is more essential than ever. Please support Boston Hassle today by signing up for our Patreon or by a one-time donation via PayPal.
Tags: Clint Eastwood, cry macho, drama, gender, masculinity, western