Contemporary Color is a blast.  The unique concept was devised by the pop-styled genius of David Byrne to marry inquisitive dance music with a nationwide color guard competition.  If you’re unclear on what precisely color guard is or does, you’re evidently in the majority.  The film quickly and energetically outlines the combination of choreography, flag-waving, pep-rally and competitive team spirit of the sport.  The multi-faceted nature of the performance, combined with new music from the likes of St. Vincent, Zola Jesus, and Tune Yards, being performed live for the first time should be overwhelming.  The film is a scattershot whirlwind of breathless energy, but that’s the whole point.  It’s like a concert film and state championship game and last night of the school play occurring simultaneously.

The film opens with a high school guard being informed they have been selected to participate in New York City.  Guards from around the country are given new pieces by contemporary musicians to be performed in concert at the Barclays Center.  In a nice bit of generational framing, not one member knows who David Byrne is.  Producer notwithstanding, the news is met with barely contained elation.  There is a giddy nostalgia which outlines much of this joy.  The single-minded devotion of a nascent passion for performance is undeniable – the nights and weekends of rehearsal and attention, the focus and frustration around the rest of the day.  There is pain and perseverance, but all of this is filtered through a fleeting perspective and rapid attention span that tumbles, twirls, throws, and catches like the moves of the floor routine.  The film does the proceedings a great service by trying to match this mindset.  While performances are always given prime focus, we occasionally meander behind curtains, down hallways, and in and out of dressing rooms.  This ‘backstaging’ helps create a sense of an actual competition, while rehearsal footage seamlessly woven into performance explodes and annotates time.  The combined effect is radically immersive. 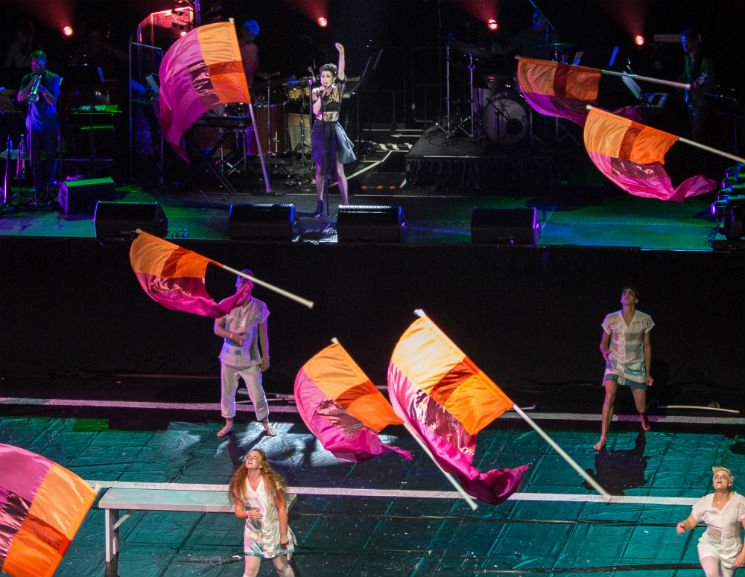 The excitement of participating among peers and contemporaries is infectious, and adorably affects the adult performers.  Artists gush about “their” kids and chat excitedly while stretching or prepping costumes.  Many unselfconsciously attempt some of the choreography, with uniformly awkward results.  The film cannily evolves the notion of nostalgia.  The same level of trepidation and delight is evident in all the performers.  What could be a highly specialized form of competition blends easily into a paean to the power of song and dance.  The students are thrilled by the celebrity and poise of the musicians.  The musicians are humbled by the dazzling synchronicity of the guards.

I have only one minor complaint with the way some sections of the film are shot.  Occasionally the musicians are foregrounded in a way that obscures or completely ignores their respective color guard.  At other times slow motion or layered exposures create pretty abstractions which detract from the breadth of the choreography.  These slips are brief and infrequent, but seem wholly incongruous with the vision.

If there is one central and splendid piece for Contemporary Color to hang on, it’s a directly annotated and deconstructed dance set to interviews by Ira Glass.  Glass can be an off-putting personality, but his ear for a story is impeccable.  As we watch the performance unfold, backed by music by Nico Muhly, the members of the guard talk about their performance, about color guard, and about themselves.  The process is narrated as we view the product.  We love to watch people sing, and even more to watch people move their bodies to music.  We love to hear people tell their stories, we love to think about the movie of our life.