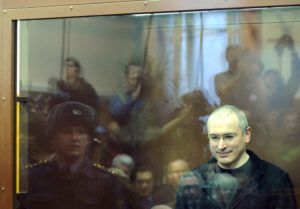 Alex Gibney, the director behind impressive documentaries Going Clear: Scientology and the Prison of Belief and The Inventor: Out For Blood In Silicon Valley, presents a newly enthralling narrative: the fall of Mikhail Khodorkovsky, the exiled Russian businessman that President Vladimir Putin refers to as “a thief.” Intertwined with the history of post-Soviet Russia, the documentary excels in tying both narratives together.

Once the wealthiest man in Russia after obtaining power over Soviet oil fields, Khodorkovsky is no longer welcome in his native country; he lives in London. “I feel like a guest here,” he says. “I like it, but I’m a guest. I am Russian. I live Russia.”  The former oligarch was exiled on multiple charges, such as money laundering and embezzlement, with Putin clearly stating that if Khodorkovsky was to step foot in Russia again, he would never see the light of day.

Gibney’s documentary chronicles the history of both Russia and Khodorkovsky, while bringing it back to the state of the country now. In a particularly alarming sequence, Gibney touches upon the “theatrics” of Russian politics; it has become theater. Nobody wants to run against Putin, but they want the illusion to be there. Clips of a Russian political debate – complete with shouting, water-throwing, and cussing – are detailed in the documentary. Putin has become unstoppable, and nobody dares to challenge him.

Though Khodorkovsky is potentially poised by Gibney to be the film’s antihero, where we as the audience feel something for him, I found myself not being moved by his story. He is complicit in Putin’s ascension into Russian political power, and Gibney focuses more the history of Russia and Khodorkovsky himself rather than what makes him redeemable. Overall, the film is enthralling to watch and fascinating for those who are interested in world politics and Soviet Russia. I only wish that Gibney had framed his “protagonist” as less of an antagonist.