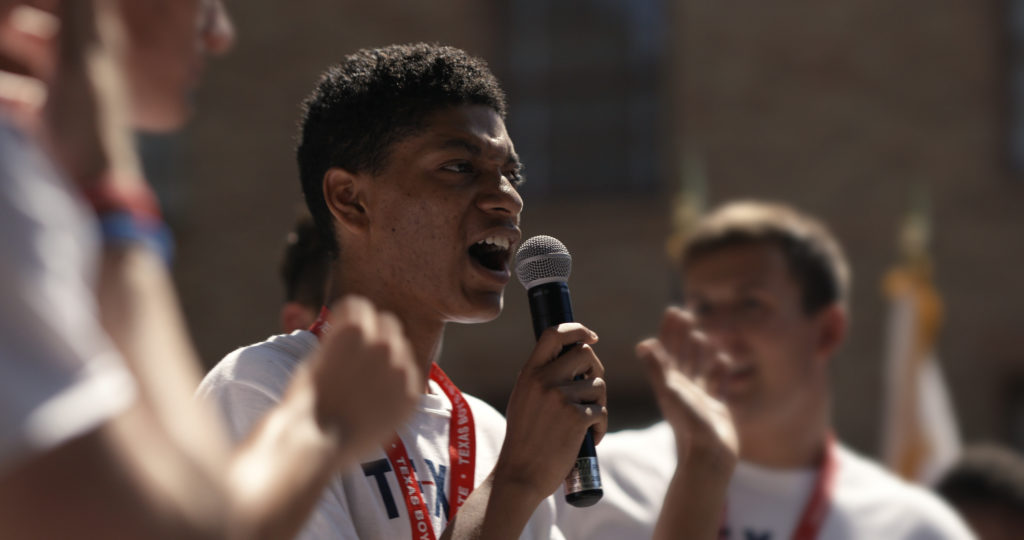 At the risk of outing myself as an old, what must it be like to be a teenager in today’s political and technological climate? My high school years, which coincided with the first term of the second Bush administration, felt plenty accelerated as it was; the internet was already my main devourer of free time, and my adolescence was set against a backdrop of such surreal events as a contested election, 9/11, the dawn of the Iraq War, and whatever the hell this was (to put it in terms relevant to this site’s coverage, I graduated the same year as Lady Bird, and could easily identify where she was in her school year by the news clips in the background). Yet, from today’s standpoint, these years feel like they might as well have been something out of Our Town. The politics were cynical and divisive and really, really stupid, but they had yet to devolve into straight-up professional wrestling promos. More to the point, my cell phone was a brick covered in buttons that I mostly left sitting in my car’s cupholder, and social media was pretty much limited to AOL Instant Messenger. The early 2000s weren’t the paragon of dignity that some people might paint them as, but compared to today they seem positively idyllic. And yet, cruelly, we continue to toss millions upon millions of hapless teenagers to navigate adolescence in the middle of a literal dystopia, who will inevitably carry this psychic damage into positions of political power.

Who are these future leaders– and what are we doing to them? This is the question explored by Boys State, the fascinating new documentary from Jesse Moss and Amanda McBaine. The film is a compassionate portrait of several young men dead set on success in politics, with all the virtues– and flaws– that come with it. For the unfamiliar, Boys State is a long-running youth summer program run by the American Legion in which politically-minded high school students get their first taste of the real thing. Each year, hundreds of young men in each state are chosen to travel to their capital and participate in a fully functional mock election cycle (there is also a complementary Girls State program, which could make for a very interesting sequel/counterpoint). The students are divided into two parties, the Federalists and the Nationalists– deliberately meaningless designations, to allow the students to organically develop their own platforms. In short order, the boys vote for officials, lobby for their preferred party lines, and draft nominees, all building to a climactic election in which one young politician achieves the coveted title of Governor.

In Boys State, Moss, McBaine, and their camera crew embed themselves in Boys State Texas, following a handful of boys as they navigate the ups and down of the microcosmic campaign season. Most central to the “narrative” are Steven, a progressive, soft-spoken son of Mexican immigrants who rises to the top of the Nationalist party, and Ben, a shrewd young conservative who becomes the guiding hand behind the Federalists. As they feel their way through the process, we essentially watch in real time as they learn some hard truths about what it takes to win votes– and how to adapt oneself accordingly.

Watching these students go through their paces, two somewhat contradictory thoughts spring to mind: “These kids are really earnest,” and “These kids really talk like politicians.” These are sixteen- and seventeen-year-old kids, which is prime “we’re gonna change the world” age. Every single one of these 1200 Texan boys walks into the Austin state house with absolute, unshakable conviction that this is their own personal Hero’s Journey, and I’d be willing to wager that a plurality walk out with that conviction intact. Yet we also see the beginnings of the doubletalk that characterizes politicians in the most pejorative sense of the word. Take, for example, Rob, a likably doofy jock running against Steven for the Nationalist gubernatorial nomination. Without quite dipping into full MAGA mode, Rob embodies the down-home Texas conservative, championing the second amendment and railing against abortion. Yet, in a remarkably candid interview to the filmmakers, Rob admits that he’s personally pro-choice. “The way I see it, it’s a game,” he says, rationalizing that he knows he needs to say what the others want to hear in order to win their votes. “That’s politics, I guess.”

By the same token, it’s interesting to see how the parties’ values coalesce in the absence of preexisting party lines. Predictably, barring a few outrageous suggestions (the notion of secession comes up a few times), the conversation shapes up around current hot button issues. This being Texas, the defining issue of the campaign becomes gun rights: Steven, it comes out, once organized a March for Our Lives rally, and Ben is quick to dig up photos to turn him into a second amendment bogeyman. Watching both Steven and Ben interact with their peers, there is a sense that most of them have a more nuanced view of the issue than one might expect (at least a couple share first hand stories of school shootings), but they’re still susceptible to the “gotcha” factor when photos of Steven marching alongside David Hogg pop up on the Federalists’ campaign Instagram.

What’s remarkable about Boys State as a film is the non-judgmental eye it casts on its subjects. Watching the film, you will almost certainly disagree with some of the nascent political attitudes on display, and you may or may not be able to relate to the competitive spirit or hormonal community culture (having been raised a dorky creative kid in a tiny, progressive Massachusetts charter school, the version of teenage masculinity on display might as well be science fiction to me). Yet even at their most objectionable, the subjects come off as fundamentally good kids, and it’s difficult not to be drawn into their campaigns. It’s also fascinating watching them develop their public personas, and seeing which ones thrive and which falter.

Of the central students, I found the most compelling to be René, the party chairman for the Nationalists. Sharp-tongued, liberal, and Black, René cuts a striking contrast to the good ol’ boys that make up the majority of the electorate (“I’ve never seen so many white people ever,” he quips to the camera), and his withering outspokenness makes him his share of enemies. In a dispiriting subplot, a handful of dissenters start an “Impeach René” social media account, which quickly spirals into racist attacks before getting deleted. Still, his charisma is sufficiently undeniable that he maintains a firm hand on the proceedings. When he calls his opponents’ bluff and holds a verbal impeachment vote, his

support is overwhelming. “I saw about twelve of you raise your hands,” he dryly observes, “With those numbers, I suggest you start an intramural basketball team.”

Of course, the drawback to shadowing students in a program this massive is that you can’t see everybody, which occasionally makes one feel like we’re missing some of the action. This is particularly noticeable in the third act, when Federalist gubernatorial nominee Eddy seemingly materializes out of nowhere. Whether due to lack of cooperation, an absence of compelling material, or simple bad luck, Eddy is something of an enigma, made even more so by the fact that, by the time we see him, he has apparently blown out his voice to a croaking whisper. From what we gather, Eddy is a gifted conservative orator (“Everyone says he reminds them of Ben Shapiro!” Ben gushes), but we’re largely left to imagine how he captured the hearts and minds of his peers. Still, this is only one false step in a film which, from a narrative standpoint, is otherwise rock solid.

Watching Boys State, the thought that kept returning to my mind is how fascinating an artifact this would turn out to be if any of these boys do wind up rising to national prominence. It’s certainly not beyond the realm of possibility: one can easily imagine Steven as the next beloved grassroots candidate, or Ben as a ubiquitous conservative pundit, or René as a strategist/attack dog in the James Carville mold. But even if their appearances here prove to be the height of their political careers, Boys State will remain a compelling and engrossing snapshot of political ambition and youthful masculinity at the twilight of the Trump era (knock on fucking wood). It’s a rare glimpse at politicians before they’re assimilated, Borg-like, into the political machine. The kids are coming– and, at least for the moment, they’re mostly alright.

Streaming Friday, 8/13 on AppleTV+ (Read the Hassle interview with Moss and McBaine here!)