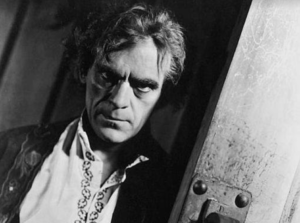 You know the face—the deeply set, sorrowful dark eyes, the punctuated brow, the bolts on either side of his neck. You know the photo—a black-and-white picture looming at you during Halloween or when people talk about the most impressive movie monsters. It’s Boris Karloff as Frankenstein’s monster in James Whale’s 1931 adaptation of Mary Shelley’s Frankenstein, a role that has since become iconic in pop culture and the film industry.

Boris Karloff is most well-known for Frankenstein. However, most audiences don’t realize the man behind the monster was a prolific, hard-working actor with over two hundred roles in his filmography that reached far beyond what he’s predominantly known for. Karloff, his challenges, his fears, his legacy, and his incredible life are documented in Thomas Hamilton’s documentary, Boris Karloff: The Man Behind the Monster.

The film takes us through Karloff’s career, beginning with Frankenstein. We’re given fascinating insight into the film from some impressive figures from the film industry, such as Guillermo Del Toro, Ron Perlman, Christopher Plummer, John Landis, Karloff’s daughter, Sara Karloff, and a multitude of other writers and directors. It’s fantastic to see how far Karloff’s legacy has stretched—each person’s interviews express such passion and admiration for Karloff’s work, and how it has influenced them as filmmakers. We’re also given details about the filming of Frankenstein that are not widely known—Karloff’s contempt for the Frankenstein scene showing Maria’s death, and that while fellow actors Colin Clive and Mae Clarke enjoyed invites to parties and media junkets during the film’s release, Karloff-despite being the film’s star—was very much excluded.

The documentary touches on Karloff’s work beyond Frankenstein, from films like The Mask of Fu Manchu and The Mummy to his television work in the highly entertaining (and disturbing) horror anthology, Thriller.

The Man Behind the Monster admirably centers on Karloff’s ambition, his steadfast nature, his kindness, and his passion for film, having become a charter member of the Screen Actors Guild after spending hours in the Frankenstein makeup. One of Karloff’s final roles in 1968’s Targets is highlighted, in which the crew reminisces that, despite being ill at the end of his life, Karloff was able to perform a poignant monologue in one take in the early hours of the morning. Another moment shared details that even though he was on oxygen and in a wheelchair, Karloff made his last appearance on a talk show by pushing through like there was nothing wrong. It’s stories of Karloff like this that show the power of the man behind the monster, the dedication to entertainment, and the film industry.

Boris Karloff: The Man Behind the Monster is a fascinating documentary that features some brilliant minds and some just-as-brilliant stories about the man who has become an icon in modern pop culture. As a big Boris Karloff fan myself, I learned a multitude of things from this film and was able to take away heightened respect for the sacrifices that Karloff made through his career. The documentary’s production was my only caveat—I was left wanting in the introduction, backdrop, transitional effects, and photo quality. This film would have been a dream if released by a studio like Netflix. With big names like Del Toro and Landis starring, I expected an on-par production value but was given surprisingly amateur effects for a documentary with such a grand story to tell.

Boris Karloff: The Man Behind the Monster is a brilliant insight into the legacy of a horror icon that faced his fears and his challenges with unparalleled ambition.