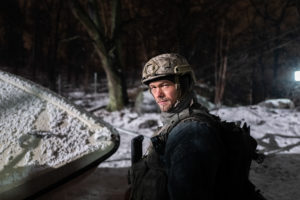 Lately, post-apocalyptic films are starting to hit a little too close to home. As sinister leaders hold office and Russia brings merciless, horrific attacks upon the Ukrainian people, the genre that once prompted escapism and the thought, “well, that could never really happen in real life,” has become startlingly realistic.

This is the exact feeling I experienced while watching Swedish director Adam Berg’s debut, Black Crab. Caroline Edh (The Girl with the Dragon Tattoo and Lamb’s Noomi Rapace), is a mother-turned-solider (and former speed skater) who drifts along the desolate wasteland of a war-torn Sweden. Edh is recruited into a covert mission to cross an ice-slick sea to deliver mysterious cargo that could end the war. Reluctant at first, Edh is persuaded by her superiors that she will see her daughter again—having been separated at the beginning of the war—if she completes her mission successfully. The worn-out soldier accepts out of desperation and joins a haggard team to transport the package across the ice.

Berg’s future Sweden looks like it’s been plucked carefully from Cormac McCarthy’s nightmares; smog-ridden, gray-skied, and vicious, with most of the population left to starve while living in filthy refugee camps with little to no resources. The quick and brutal introduction to this dismal world is well-done and jarring; Edh is picked up by her future teammate Lieutenant Nyland (Jakob Oftebro, who really steals the show in his later scenes) to be taken to the military base to be briefed, and, when left alone in the car en route, is attacked by desperate, ill-intentioned crowds in one of the camps.  The world that Berg has built is terrifying and cold, and for his first feature film, I was undeniably impressed by his ability to build such a dreadful and tangible world.

Something that caught my attention throughout the film is that little is given to us about just who Sweden is fighting—sure, they briefly mention that it was a civil war, but who? The only detail the audience is given is that they are “the enemy.” There’s no explanation as to what started this war, who “the enemy” really is—and while it may appear muddy at first, it’s a great move on Berg’s part. We don’t even get to see their faces. Every enemy soldier that we as the audience come across has their face covered in ski masks or is making attacks from above. They’re an “unseen” enemy, allowing the viewer to impose their own reality-based fears on who this “enemy” might be. It always gives us a unique view from Edh’s perspective; she doesn’t care who they are—she just wants to evade them as much as possible so that she can get her daughter back.

Without giving too much away here, Black Crab succeeds in creating a horrific sense of dread and fear for not only our enemies but our own government, something that makes this post-apocalyptic flick all the more frightening and rooted in reality. Berg’s created a terrifying world that does not seem that far off when looking through the lens of war and human desperation. Rapace and Oftebro give visceral performances in addition to an impressive and unknown ensemble cast, and due to Berg’s skillful worldbuilding that I mentioned above, you feel cold watching this flick.

Though a solid and entertaining action-thriller, Black Crab isn’t without its faults. The final act of the film sees Edh and Nyland navigating through the industrial, red neon-drenched halls of their home base, trying to thwart the plans to “end the war.” This final act could have easily been wiped from the film and ended on the ice; prolonging it allowed for the ending to become muddled and frantic, and, at some points, confusing.

Despite this, Black Crab is one of Netflix’s better films in recent memory, and stands beside some of my favorite post-apocalyptic flicks, from The Road to A Quiet Place. Its ability to have its audience reflect on their own reality and the ugliness of humanity is something that haunted me long after I shut it off.

Streams on Netflix on Friday, March 18.