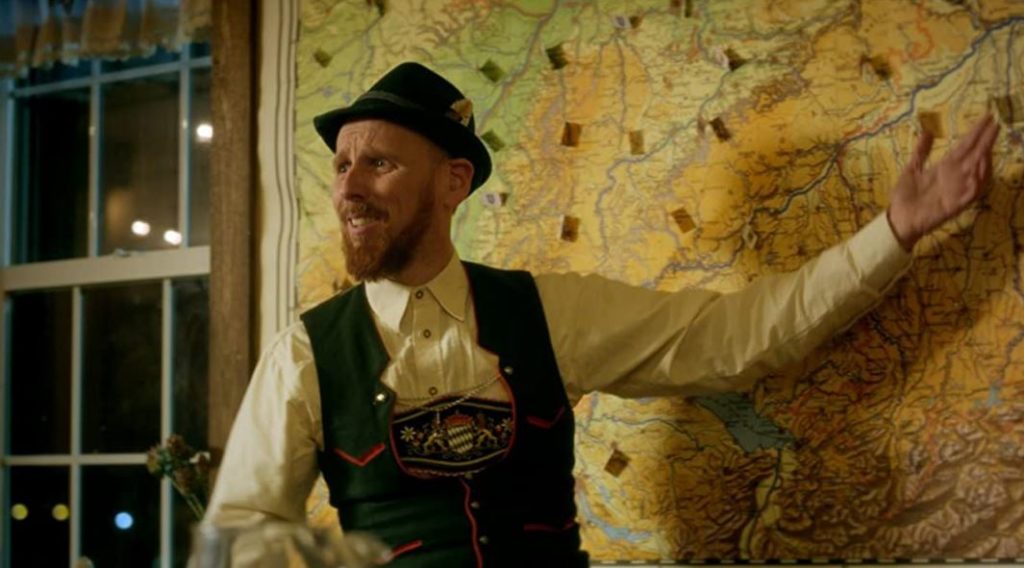 American Sausage Standoff, title alone, sounds like an affront in this day and age. American, as in a characteristic related to this country? Sausage, as in one of the most phallic, hypermasculine food items? Standoff, as in there just isn’t enough for two in this town?

The movie is directed and written by Ulrich Thomsen, whose viewpoint of America may be glazed (though not too far from the truth) but who found heart in the bravado of friendship. Ewen Bremner stars as Edward, a mood-swinging “sausage scholar” who seems to be mousing about Gutterbee, a fictional town with the motto “Cabaret Capital of the West.” His dream is realized by Mike (played by Thomsen’s Banshee co-star, Antony Starr), a man who just got out of prison and wants to make a quick buck. The quirky-brainy passion with the renegade muscle duet is the drive; Mike supports Edward’s dream of opening a sausage store, which would also represent a United Nations-front of sorts in this ragtag racist town.

Gutterbee is led by Jimmy Jerry Lee Jones, Jr. (W. Earl Brown), who is “determined to make [Gutterbee] a better place,” a sentiment that has the same register as a pale man wearing a red hat shouting, “Free speech!” Jones has been in the process of eradicating Asian businesses by the time we’re introduced to everyone in the film. He is a middle man of sorts; he has hooligans of his own to boss around, including his gay son Hank (Joshua Harto), but his mob boss antics are influenced by an upper management villain who seems to be even worse. For the record, I’m not sure if the time period has ever been established, but it wouldn’t be surprising to pass a present-day Gutterbee of the sorts on a cross-country trip.

The movie’s most bewildering feature, besides the fact that Edward has an endless flow of sausages in the middle of nowhere, is the mood of it all. It seems like a black comedy that runs on the idea that friendship between two different people (albeit two white men on different struggle boats) can conquer xenophobia. Is it enough so we feel good about the Asian business owner to be white-saviored? Probably not. Does that touch of family-owned homophobia help? Not really. The film reads as a satire that is meant to be feel-good at the end, but gets a little muddled in how heroes are supposed to act. Thomsen’s Danish touch to camaraderie set in the American West had good intentions, but indeed, there actually might not be enough room for these conflicts in this town.