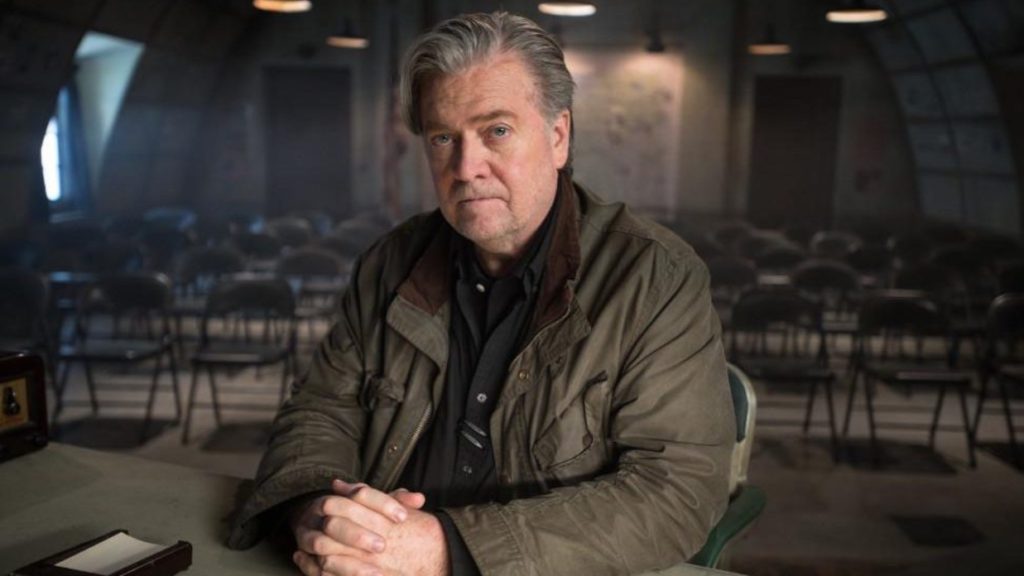 “People keep asking me, ‘Why did you make this movie?’” said Errol Morris, the award-winning documentarian, following a preview screening of his new film, American Dharma, at the HFA Saturday night. “The short answer is, I was curious.”

It’s the sort of exchange a filmmaker might raise rhetorically, but in Morris’ case, the question is literal: less than five months since its first screening, Dharma is already easily the most controversial film of the director’s forty-year career. A spiritual successor to 2003’s The Fog of War (a profile of infamous Vietnam-era Defense Secretary Robert McNamara) and 2013’s The Unknown Known (about Donald Rumsfeld), American Dharma turns Morris’ camera on yet another political boogieman: former Breitbart editor and Trump svengali Stephen K. Bannon. As in those films, Morris more or less lets his subject unspool his history, philosophy, and– in Bannon’s case– self-mythology over the course of the film’s running time.

It is here– before we even get to the film itself– that we arrive at the controversy. Four days prior to American Dharma’s premiere at the Venice Film Festival, it had been announced that the centerpiece of the 2018 New Yorker Festival would be a live, on-stage conversation between Bannon and New Yorker editor David Remnick. The backlash was predictably swift, as the festival’s other guests threatened to drop out and the Twitterverse gnashed its collective teeth. Beyond the obvious issue– that Bannon is an utterly terrible human being that no New Yorker subscriber would ever pay money to see– a national debate arose on the question of platforming: given the demonstrably insidious nature of Bannon’s views and influence, why should anyone give him a microphone through which to speak, regardless of context? Remnick retracted his invitation two days later, but the debate was still going strong as Morris unveiled his film. The reaction was understandably mixed, with several critics accusing Morris of being part of the problem, regardless of intent. As always, the debate spread from critical reviews to sight-unseen thinkpieces, and the film quickly gained notoriety. Nearly half a year after those first screenings, American Dharma has yet to find a distributor, a situation unheard of for a filmmaker of Morris’ stature.

Like much of Morris’ work, Dharma is simultaneously simple and showy. On its face, the film is essentially a 95-minute monologue from Bannon, with occasional interjections from Morris himself (more on that in a bit). But Bannon, as it turns out, is something of a self-styled film snob, with much of his worldview and self-image derived from classic Hollywood– mostly westerns and war films, but especially the Gregory Peck WWII epic Twelve O’Clock High. Morris, in turn, fashions his film as a sort of breathless espionage thriller, to the point of building an exact replica of the Twelve O’Clock High bunker set in which to interview his subject. In doing so, he allows Bannon to live his fantasy as the star (or at least the enigmatic antihero) of the movie in his mind, complete with portentous music and dramatic camera angles. Throughout the film, Morris and Bannon view clips from some of Bannon’s favorite films, allowing Bannon to expound upon (and, in several cases, hilariously misread) their greater themes. Bannon is, of course, deluded and self-inflated; what’s disturbing is the success with which he’s manifested his fantasies into the real world. 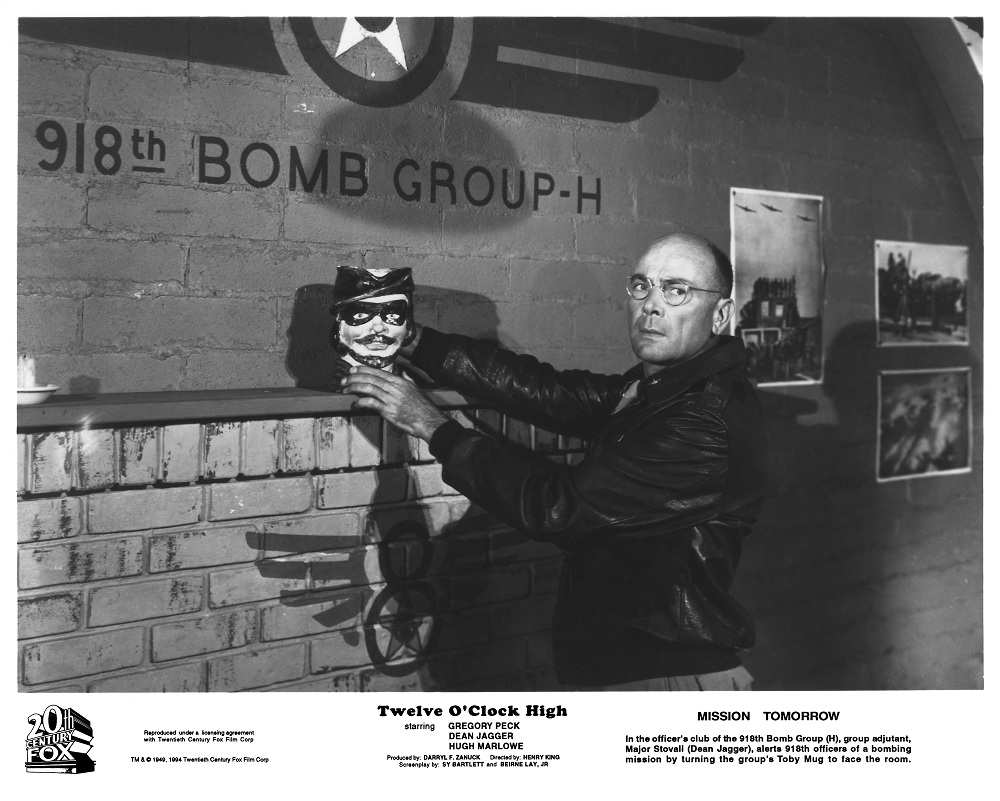 Morris, who is clearly dismayed at the film’s reception so far, says that one of the most common complaints he’s received is that he failed to sufficiently hold Bannon’s feet to the fire (“Should I have brought a bonesaw to the interview?”). It’s understandable why some might view Morris as an activist filmmaker: his signature achievement, The Thin Blue Line, literally saved a man from death row. But Morris has always been more quizzical observer than man with a mission. Take, for example, his cultishly beloved debut, Gates of Heaven, which is on its face a human interest story about a transplanted pet cemetery, but then proceeds to delve so deeply into the lives of its main participants that it becomes something strange, oddly touching, and ultimately unclassifiable. Even when he sets his sights on a political figure, like McNamara or Rumsfeld, he’s less interested in passing judgement than he is in examining them, taking them apart piece by piece to figure out why they do the (often inconceivably terrible) things they do. In the case of Bannon in particular, Morris comes in not with a particular point to make, but in hopes of understanding an evil which he admittedly finds incomprehensible.

It is noteworthy that, to a greater degree than nearly any of his previous films, Errol Morris is actually in American Dharma. Morris is a notorious adherent to what he calls the “Shut the Fuck Up school of interviewing,” to the extent that he designed an elaborate device to allow him to interact with his subjects directly through the camera. In Dharma, Morris is actually sitting across the table from Bannon, engaging his subject directly. To be clear, Morris has not turned himself into a Michael Moore-like avatar– his presence on screen is mostly limited to a blurred profile in the foreground– but he is clearly miked, and his questions and responses to Bannon’s madness are very deliberately left in as a central aspect of the film. What’s more, this is perhaps the first Errol Morris documentary where the director plays a central part in the narrative; Bannon’s previous incarnation as a right-wing documentary filmmaker was inspired by seeing Morris introduce The Fog of War at Telluride (“This is all your fault!” Bannon exclaims, as Morris laughs uneasily). While Morris does occasionally “score points” on Bannon (as when he points out that Trump’s focus on big business is inherently anti-populist, undercutting a particularly lengthy monologue), the director often comes off as baffled and helpless– in other words, as a stand-in for the audience’s own reactions, whether we want to admit it or not. At one point, a sneering Bannon asks Morris how he could possibly have voted for Hillary Clinton in the primaries, and Morris responds, “Because I was scared! I was scared of you guys!”  While Morris recalled after the film that he’s taken flack for admitting this fear rather than expressing solidarity with his party, I found it refreshing; in a climate where every public statement is stage-managed as a volley in the culture war, this moment of honesty stuck with me. 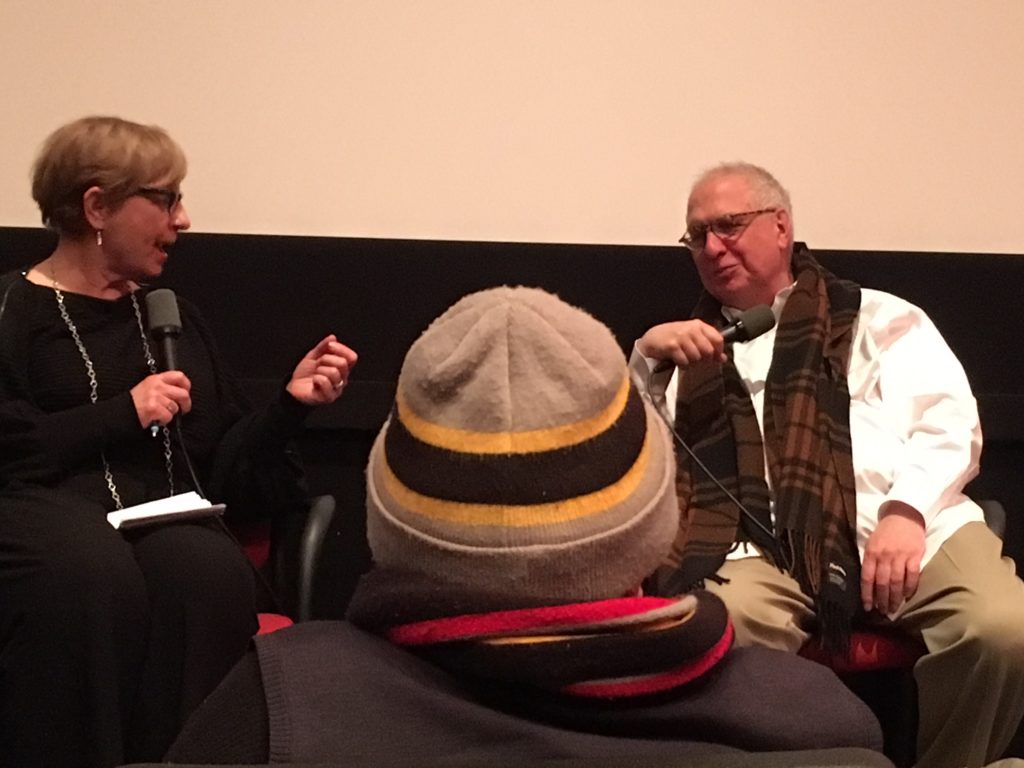 This show of vulnerability, though, does speak to the more valid criticisms of the film. To me, the idea that an independent filmmaker is giving Steve Bannon a platform is somewhat silly; as Morris himself noted, “He’s been on the cover of Time magazine. He was the advisor to the forty-fifth president of the United States. I’m not the one giving him a platform.” The question, rather, is why someone would put Bannon on camera, build an elaborate set to indulge his fantasies, and then not directly challenge him to his face? But this argument, too, fails to give credit to Morris’ craft. For starters, while Morris rarely interjects himself, he constantly undercuts Bannon’s points in the editing room (“It’s the liberal media giving airtime to the neo-Nazis,” Bannon says over a montage of openly hateful Breitbart headlines; “These issues don’t mean anything to the people in the streets,” as a car in Charlottesville literally murders people in the streets). Moreover, in allowing his subject to ruminate on his nonsensical, quasi-mystical-cum-objectivist philosophy and stroll with perceived coolness down streets of backlot facades, he exposes him as both deluded and deeply, profoundly silly. Despite the firestorm it’s caused, it’s clear from the film exactly where Morris stands (as he quipped in the Q&A, “My only problem with the left is that it’s not left enough”). The problem, it seems, is the subtlety with which he makes his statement.

At risk of understatement, we do not live in subtle times. Discourse is presented swiftly in thudding blasts of 280 characters and caps-lock, and for every moment of brightness and unity there is a milkshake duck. There are many reasons for this, but, as Morris suggests, Steve Bannon and his weaponization of the Breitbart comments boards played a not insignificant role. The irony, then, is that Morris’ film is in danger of being drowned out by the climate partly created by its own subject. During the Q&A, Morris made an impassioned argument against what he referred to as “the ostrich mentality”– that is, the tendency to bury one’s head in the sand to avoid unpleasantness. Few subjects are as thoroughly unpleasant as Steve Bannon, and while Morris’ film presents neither easy answers nor satisfying clap-backs, it remains an important document for those grappling with our current situation (and, perhaps even more so, for future generations trying to figure out what the hell was going on with us). One way or another, American Dharma will eventually find a way to be seen, which means we’re probably only at the beginning of its outrage cycle. The good news is that Morris has made it perfectly clear that he’s not finished making movies. We need him, whether we like it or not.