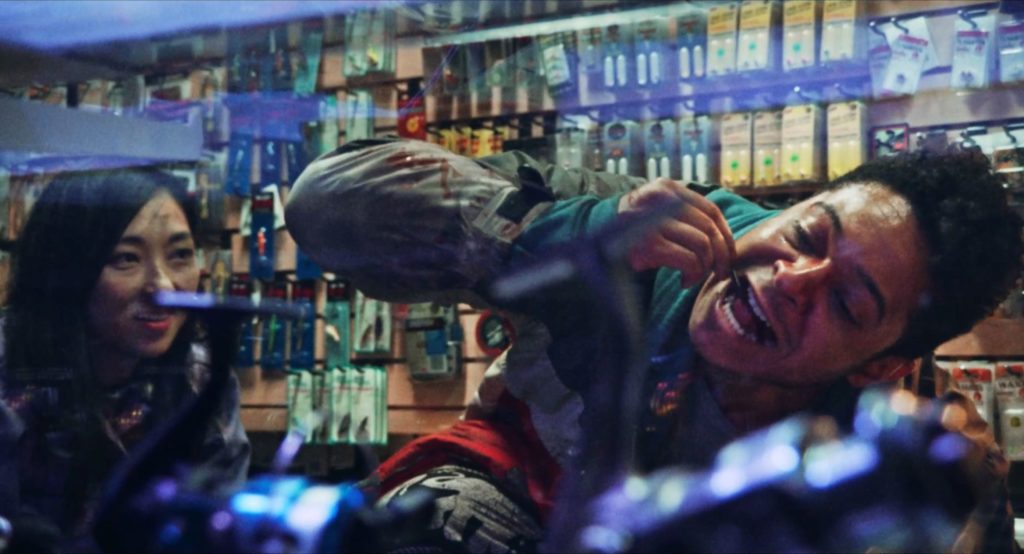 It’s November, which means that, as a critic, I am fucking swamped. This is the time of the year when studios trot out their best and most artistically daring films, meaning that those who analyze the artform and take it seriously need to finally sit up and pay attention. Additionally, as a voting member in my local critics’ organizations, I find myself desperately trying to catch up with all the films I meant to see over the course of the year. This is all, of course, on top of my regular writing grind and duties as the Hassle’s film editor (to say nothing of working a full-time day job on top of everything). Time, as they say, is at a premium.

But I’m not made of stone. I’m an old-fashioned video punk at heart, and as much as I love prestige dramas and beautiful art films, I have a hard time resisting the siren song of some of that good old psychotronic weirdness. All of this is to say that, if you send me a film entitled All Jacked Up and Full of Worms, I am going to watch it, time constraints be damned.

All Jacked Up at times plays like an everything’s-connected ensemble piece in the Magnolia/Happiness vein, if filmed through the putrescent lens of Troma Entertainment. Benny Boom (Trevor Dawkins) is an unkempt loner who dreams of being a father, despite having no partner, money, or employment prospects; to train for the job, he orders a “youth series pleasure doll” to take care of (which, while I’m thinking in superlatives, has an easy lock on “Most Upsetting Prop”). Benny employs the services of Henrietta (Eva Fellows), a free-spirited sex worker who spends her free-time consuming “worms” which she claims possess psychedelic capabilities (“We can eat them Lady & the Tramp-style!” she cheerfully offers). He also crosses paths with Roscoe (Phillip Andre Botello), a cum-scrubber at the love motel where Henrietta works, whose girlfriend (Betsey Brown) is more interested in sex-magick rituals with a male acquaintance than in their relationship. There’s also a psychotic clown roaming the alleyways (or maybe just a psychopath who wears clown makeup; the film isn’t entirely clear on this point).

These characters collide when Henrietta finds herself pregnant (despite the fact that she and Benny never actually had penetrative sex). Distraught and trying to find the woman he hopes will be the mother of his baby (animate or otherwise), Benny finds himself back at the love motel with Roscoe, and the two decide to indulge in Henrietta’s worm stash. From here, things get a little slippery: under the influence of the worms (which, I should probably add, look for all the world like the garden-variety earthworms one might get at a bait & tackle shop), Benny and Roscoe spiral into a dream realm of casual violence, perversity, and children’s television programming, all while trying to cling to whatever shreds of sanity they possessed in the first place. 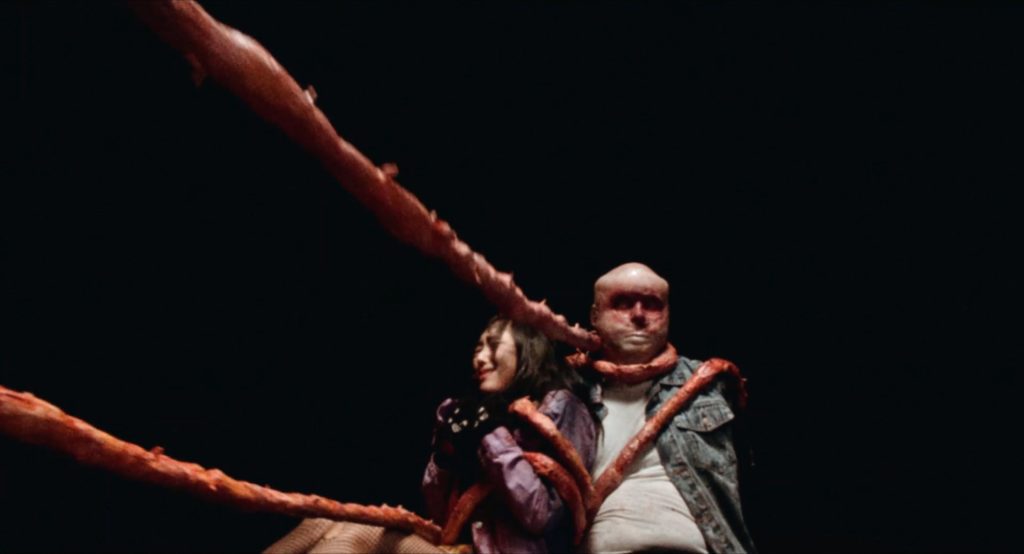 I have just spent two paragraphs attempting to describe the plot of All Jacked Up and Full of Worms, which has to count as one of the silliest things I have done in a very long while. All Jacked Up is not a “plot” film, in which things “happen” in a “logical” or “sequential” order. This is a film about dirtbags getting high by devouring earthworms in filthy hotel rooms, and, as such, attains a sort of perverse dream logic. Scenes are interrupted by channel-surfing vignettes of faux found footage, ranging from an interview with a Leary-esque psychedelic guru and a children’s show in which an enormous worm puppet lectures tots with William S. Burroughs-inspired nonsense maxims. Reality, such as it is, is presented as crude and nasty, and is frequently called into question. All Jacked Up and Full of Worms is a work of gutter psychedelia, and should ideally be watched after midnight on a cruddy VHS on your staticky basement TV. A question like “What’s it about?” misses the point entirely.

And yet, I don’t want to give the impression that this is simply some gross-out transgressive raunch-fest. It is that, of course– very much so– but the more I mull on it, the more I’m convinced that it is truly a work of fucked-up art. The characters may be unpleasant, but I never got the impression that director Alex Phillips dislikes any of them; they’re trying to get through this ugly world just like the rest of us, and their desires are relatable, if also deeply disturbed. And though the situations are often disgusting, they never feel like they’re played for cheap laughs. This sort of stuff can only be dredged from deep in one’s subconscious, and I have no doubt that all of it possesses genuine meaning for its creator. As crazy as it may sound, All Jacked Up and Full of Worms may be one of the most personal films of the year.

I’m not going to say that All Jacked Up is like nothing I’ve seen before; as both a critic and as a reformed video store cretin, I have seen some shit. But I’ve seen enough to separate the cheap, cynical junk from the really good junk, and this is most certainly the latter. All Jacked Up and Full of Worms was clearly dredged from deep within its creator’s soul, or at least his demented id. In 10 years, Alex Phillips will either be a household name among midnight movie circles, or in prison. Maybe both.

Now streaming on Screambox. Also available digitally and on demand.

Tags: Alex Phillips, All Jacked Up and Full of Worms, Screambox