414 days: the quantified time that separates the earthly births of a contemporary R&B Leo and a Midwestern drama Virgo that share the coincidence of a government-issued first and last name.  The existence of the Black and White Michelle Williams in the same planar timeline of Hollywood fame beginning circa 1998 — where one was the final inauguration to one of the era’s most successful girl groups, while the other had finished filming in North Carolina for an iconic ’90s teen soap opera — is sorta magical, even if their works exist in different neighborhoods. And to my knowledge, the Williamses haven’t met yet, which makes their other similarities even more intriguing for two uncrossed stars in a small galaxy of nepotism and networking.

The appearance of tragedy, either in a comedic gaffe or in actual tragedy, for both Williamses is striking enough to mention. Of course, I don’t think that the MWs’ images should be unilaterally characterized by a seemingly telling trend. I’m quite sure DCreek Williams has lived, laughed, and loved every now and then. And DChild Williams has been included in both public performance reunions at the 2013 Superbowl half-time show and the 2018 Coachella headliner. But it’s sorta funny, especially when you’re grasping for straws on anything positive to find in 2019. 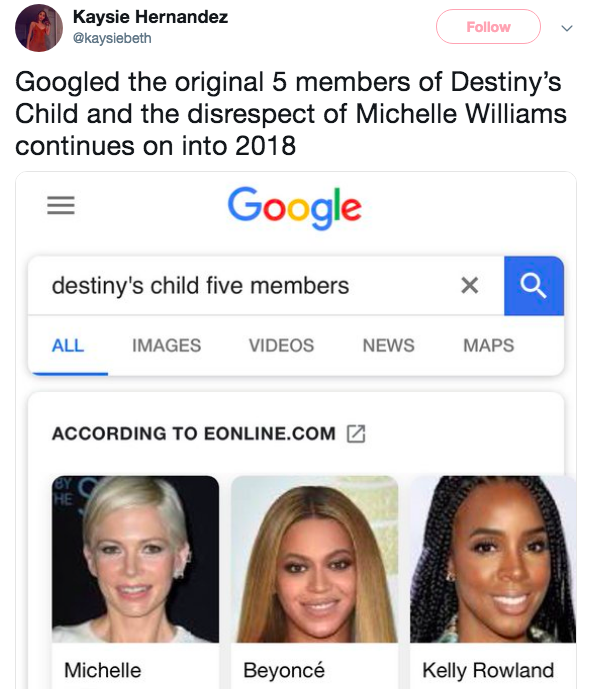 And suffice to say that this year proves no different for the Williamses. The revisitation of the Coachella performance in Beyonce’s Netflix special Homecoming initially made me feel bad about the strange overlay of “California Love” during #PoorMichelle’s singing segment until I realized, upon Googling, that the Internet will never let her go. And Long-Suffering Michelle starred in After the Wedding, a remake of Susanna Bier’s 2006 Danish film that starred Mads Mikkelsen.

If you happened to catch the trailer for this movie without any prior knowledge, the promised plot twist could have been feasible. Williams plays Mikkelsen’s role as Isabel, who helps run an orphanage in India but reluctantly flies over to New York to meet with Theresa (Julianne Moore), a wealthy executive-slash-potential donor. “I won’t come back unless I have a suitcase full of money,” Williams repeats approximately three times to the orphanage. The script is determined to let us know that she is serious, although we don’t know if she has a personal attachment to India, the orphanage, or her career.

Theresa is nice, but there’s an uncertainty about her intentions. In their first meeting, Theresa lets Isabel know that things are a little hectic since her daughter Grace (Abby Quinn) is getting married. But hey! Why doesn’t Isabel attend the wedding and they can talk about the donation afterwards? Sorta weird, but not as weird as when Isabel finds out that Theresa is betrothed to Isabel’s ex-lover, Oscar (Billy Crudup) at the actual wedding. Isabel is reasonably wigged out, and that’s the vibe of the trailer: things! are not! what they seem!! 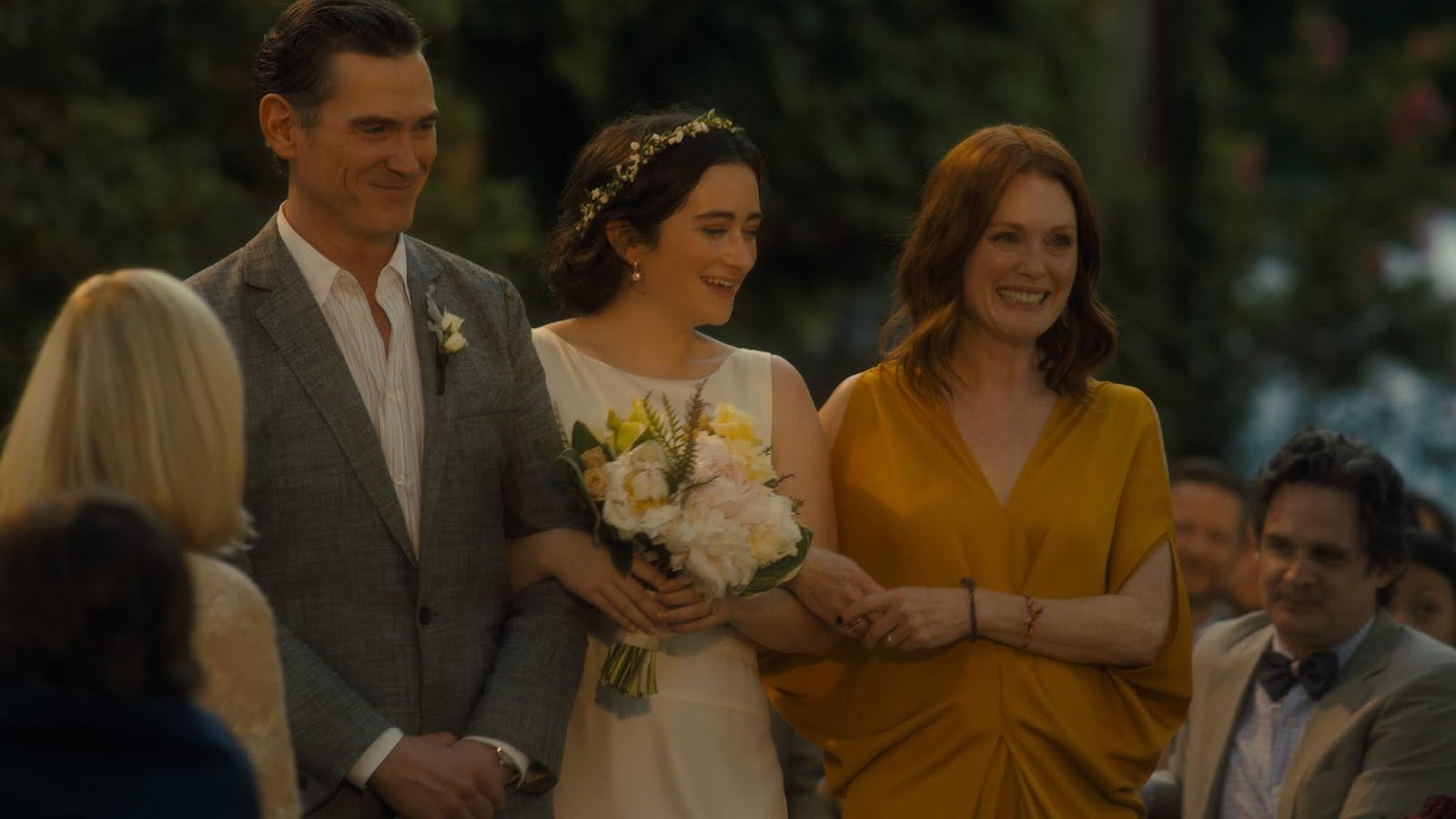 To imagine my disappointment over After the Wedding‘s plot twist (at least, the execution of it), you’d have to understand how the plot twist in 2016’s The Girl on The Train blew my mind. To set the scene: a college-student me stumbling to watch a movie, any movie, on a weeknight, bearing all ignorance on the table, even not realizing that Emily Blunt was the star. Unreliable narratives may have been already on the horizon, and I had already seen Gone Girl with hands stained of spoilers, which made Train (and especially Blunt) all the more impressive for pulling it off. The movie itself wasn’t particularly unique nor memorable in other facets, but if it can embrace its niche in the Lifetime genre and still be entertaining, it’s a good night.

In the same vein, After the Wedding didn’t have to be a great movie, but it didn’t have to drain all of its charm for the sake of theatrical tensions. At this point in the game, the movie’s three acting veterans have exercised their types of roles enough times for us to know that they’re capable of histrionic shouting and morose gazing. Williams: long-suffering single-ish person. Crudup: handsome but foolish man in different facial hair outfits (eg Almost Famous, 20th Century Women). Moore: complicated woman but wonderful in some sort of way. What was left for the movie to accomplish was retelling the story in an invigorating way, including the so-called twist.

The foreshadowing (and sometimes, overcooked red herrings) is pointedly cringeworthy. At the wedding, there were jokes about Grace’s husband being in love with Theresa and Grace kinda being into her dad. And maybe it would have been more exciting if the movie had a cross-incestuous subplot, but I’m sad to say that these hints don’t really come out of the dark, and instead reside as a stepping stone for a character’s singular role in order to move the storyline forward.

I’m reminded of the small controversy of last year’s Life Itself, directed by the man behind NBC’s This Is Us. Unofficially classified as “tragedy porn,” Life‘s characters undergo an unnecessary amount of psychological and physical trauma without a storytelling closure, positive or negative, so much so that it seemed pointless to even mention. After the Wedding is on the fringe of a similar characterization when it briefly skates on Isabel’s past hospitalization and Grace’s possible mistake, but clamps up just as quickly so that the watcher isn’t allowed to attach anything more than the central plot, which is discovering Theresa’s true motive with Isabel.

For the record, I won’t stop enjoying Williams’s serious roles, in part because it’s her predetermined course (though I am willing to offer the idea of Singing and Acting Williams joining together for a comedic farce at no fee at all), but it seems unfair when, without the right nuances and time to breathe, her character is a wet blanket in the extravagance of New York upper class flair. Something went amiss along the planning, and unfortunately, it soured what could have been a honeymoon (albeit bittersweet) ending.

Out in theaters now! You can catch it at Kendall Square.

Among the many discussions about last year’s The Irishman, few were longer than the film’s length run, which clocks in at about…

As we’ve learned from films like The Abyss, Deep Rising, and The Meg, no one should travel to the bottom of the…