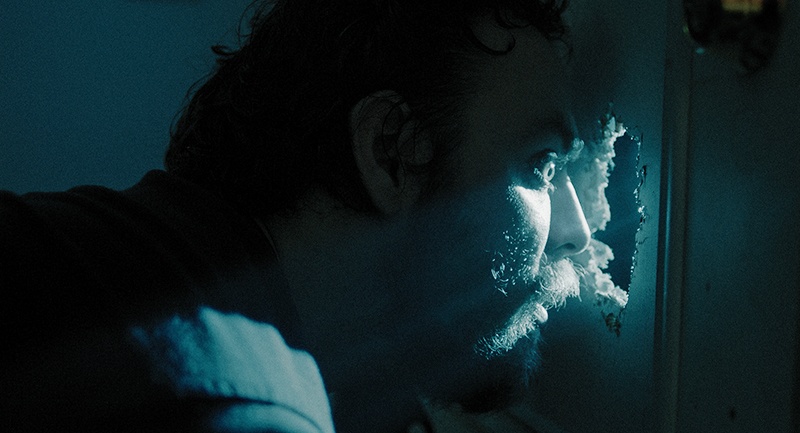 Love is complicated—and so is the monster that’s been tormenting Hank (Jeremy Gardener) every night.

After Midnight follows Hank, a bar owner who lives in the thickets of Central Florida with his longtime girlfriend Abby (Brea Grant). Together, they dwell in a ramshackle old house that’s been in Hank’s family for years. The two—as shown in many sickly-sweet flashbacks (maybe too many)—are inseparable. So, when Abby disappears and leaves just a note behind, Hank must ask himself where things went wrong. In the wake of Abby’s disappearance, a monster stalks Hank every night, trying to get into the couple’s home.

Hank mopes around the house and the bar, trying to figure out why Abby packed up and left. He seeks the guidance of his friend, Wade (the ever-amusing Henry Zebrowski), who doesn’t offer much help, but does encourage Hank to drink away his sorrows. As Hank grows more paranoid and concerned over this monster, he raises the concern of Abby’s brother, Shane (Justin Benson), who tries to convince Hank there is no monster. He urges Hank to “get help.”

You don’t see much of the entity throughout the film, save for a claw here or there. It’s a cool-looking monster—we see its horrific, spiked head on the movie poster. You’re kept on your toes the whole time, thinking, where is this thing?

You begin to wonder if Abby is actually the monster—but the theory is extinguished when Abby returns, with the simple excuse that she “had to get away.” In a heartfelt sequence, the couple sits and drinks in the front doorway as dusk envelops the run-down house. Abby tells Hank that she feels trapped. She needs more than the life they’re living—she wants kids, a good career, and to appreciate culture—things that Hank has never shown much interest in before. It’s a long scene, but a necessary one, and it sucks you in, almost making you forget that these are actors reciting their lines, not a real couple.

In a startling and strange ending, the couple has their friends over. Hank and Shane get into an argument over the monster’s existence. Hank sings a Lisa Loeb song for Abby in a sequence that goes on for maybe a little too long. This scene erupts into chaos mid-note when the slimy, spiked monster jumps Hank out of nowhere. It’s hideous, it hisses, it spits, and its teeth are daggers.

Gardener held out for so long not showing this thing nor addressing where it came from, that I had begun to think it wasn’t going to be shown at all.

Naturally, the party is mortified as the monster ravages Hank’s neck. Abby screams in terror, prompting the beast to flee. Hank goes after it and gores it to death with the antlers of the deer head that adorns the top of the fireplace. Abby and their friends crowd the doorway, watching Hank numbingly kill the beast (props to Henry Zebrowski here, who adds comedic relief with a smile, and oh hell yeah head nod to his friend). Covered in blood, injured, and with the gore-slick dead beast at his side, Hank barely gets on his knee to ask a horrified Abby to marry him.

After Midnight has a lot of heart, and I appreciated how campy it gets. The performances—from Gardener to Zebrowski and Grant—shine. Gardener and Grant have remarkable chemistry. Some of my favorite things about the film were the little details that made it feel real, from Hank and Abby’s running joke about peanut wine to the cool, funky old house they live in that actually looks lived in by the couple. The cinematography is something of note, as well, fitting the film justly with its grittiness. It makes you feel like you’ve got a layer of thin sweat on you like you’re watching this all unfold with them on a muggy night in Florida.

That being said, there were things that pulled me from the film’s overarching narrative. Did we need all of those cutesy flashbacks between Hank and Abby? Probably not. Why was the monster plaguing Hank in the first place? Who knows.

Hank’s monster, while as cool and hair-raising as it is, has no explanation. I get that sometimes we don’t need one—but this time, I think it was needed.

Abby gives us her reasoning for being gone. She wanted to see the city and culture outside backwoods Florida. If it’s symbolic, fine, but we see no evidence of that. We know Hank’s not imaging it because the entire party screamed in terror when they saw it. So if the monster has no connection to Abby, or Hank, for that matter—what is its purpose?

While After Midnight features some interesting, spunky characters and a freaky, cool monster, it proves itself a fun flick for a slightly spooky date night at best. It misses out on living up to its full potential due to lack of reasoning, pacing, and withholding its monster. The film gets caught up in romance rather than the actual horror it perpetually threatens to show.