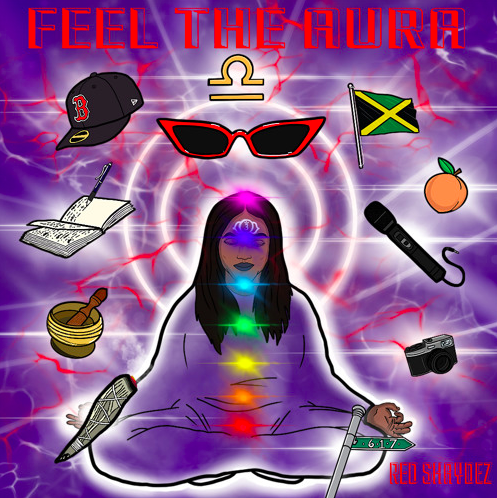 From a general standpoint, a person’s aura is the distinctive atmosphere and energy that dictates our mere existence. It allows our mind to work creatively without limitation, while simultaneously grounding us in our own reality (at least, that’s the goal). When rigorously analyzed, our aura allows us to understand the many idiosyncratic pieces of genetic makeup and stark individuality. It often shines a light on the unseen, and brings us toward rapture.

Very few in the rap game understand their aura better than Boston artist Red Shaydez. Her entire brand has been built off self-affirmation and finding comfort in her own abilities. Her newest album Feel the Aura targets these ambitions to the fullest, presenting a cinematic landscape that functions as a sturdy coming-of-age story.

Whereas her official debut project Magnetic Aura felt more confined and apprehensive, Shaydez spots a balance between staying true to herself and allowing others to participate in the creative process on Feel the Aura. “Being that my first album only features my mom and a close friend, collaborating with other creatives on my solo projects were unheard of,” Shaydez tells me. “With FTA being a ‘coming of age’ project – it was necessary to involve the community in which I’m now fully immersed in. I was a bedroom artist who was very shy to share her work (which can be heard on all my projects) and now I’m back refreshed, bringing the community with me.”

The title itself exudes a more intimate aesthetic. When something is magnetic, there’s usually an emotional distance that still needs to be kept, even if the electricity is powerfully hypnotic. But feeling something is a whole other dynamic. When you feel an artist’s music, you’re normally transported within their headspace, or at the very least, empathetic towards their well-being. FTA operates in this lane throughout, begging listeners to understand where Shaydez is coming from.

Much like the cover suggests, Shaydez utilizes a myriad of colorful soundscapes and individual symbolism for self-discovery. She’s always been a methodical songwriter and storyteller, but this feels like the first time she’s finally putting all the puzzle pieces together. “They Call Me Shaydez” acts as an unequivocal outline for her layered personality (“They Call Me Shaydez/Aura is Red/Fuck up the stage/Check out my swag”), while “Elevation (Bigger Purpose)” motivates her listeners to strive for something more in life, whatever that may be. Understanding your purpose is one thing, but actively going for it is a whole other beast. Shaydez realizes that time on Earth is limited, and something as simple as posing for a photo could maybe curb the forward movement.

One thing I admire about this project is the obvious chemistry between Shaydez and all the featured artists. The back-and-worth wizardry with Oompa on “From Bahamas To Atlanta” pairs nicely with an enchanting horn section as each rapper checks on the other’s health (a Red Shaydez staple). “We Got It On” is a certified banger thanks to three indelible verses from Shaydez, Cakeswagg and Brandie Blaze. The chorus breaks, bends, and scratches like an old Preemo design. The difference lies in the drums, where angular boom-bap is traded for palpitating 808s.

As mentioned before, the overarching concept on FTA is the pursuit of self-fulfillment. At certain points, Shaydez approaches her songwriting with a more diaristic touch. She personifies someone who isn’t afraid to be vulnerable when appropriate. “Still I Love You” is by far her most heart-wrenching account to date, a difficult retelling of her grandfather’s passing (“We chilling right out on the farm where we discovered the thee/Tragic day, it hurts to say/You died in front of me”). The track’s lingering heartache is juxtaposed by a hopeful chorus from Brockton singer Pr3scott. In almost Gospel-like fashion, Shaydez once again finds some type of light at the end of the tunnel.

It’s crazy to think this album was mainly recorded over the course of last year, as songs like “Steppin’ Out” and “From Bahamas to Atlanta” appear ripe for our current circumstances. To Shaydez however, the intentions always remained the same- “However, because I do stress self care and room for error/mistakes, the songs remain timely as well as timeless.” She’s not wrong. “Buy All the Land Up!” is a foot-stomping rebellion against tainted capitalism that would’ve been just as appropriate in any other American era. “Steppin’ Out” meanwhile will soundtrack the mental liberation all of us will hopefully find post-quarantine. The future is just as important as the present in this specific climate.

A common thread between this album and past endeavors is stylistic variation. Shaydez sounds just as assured harmonizing in Missy-like cadences on “Ghost” as she does rapping in an affirmative tone reminiscent of Ultimate-era Denzel Curry (“The Recipe” mixes this combination of pulsating bass and authoritative shout raps that reminds me a lot of the Florida MC). The influences are transparent, but the music is unapologetically her own. By incorporating multiple producers from the area, Shaydez successfully offers a slice of Eastern Mass dialect. The result is vibrant, dynamic, and thoroughly emphatic.

FTA was supposed to be accompanied by a full-length film titled Feel the Aura: Behind the Shaydez, which would’ve showcased the artist’s visual eye, as well as the album’s background (she has a degree in film and video from Fitchburg State). Unfortunately, COVID has delayed it until next year. Thankfully, the project itself already feels like a movie. One with immense character development, a stout supporting cast, and a message that’s worthwhile.