Last week, I had the chance to steal a couple seconds from Sadurn’s busy schedule to ask some questions, get some answers, then rocket off in an equal and opposite direction from them. Sadurn consists of Massachusett’s natives Genevieve DeGroot and Jon Cox. The duo met in Philadelphia’s talent soaked DIY scene 2 years ago and have been laying down fuzzy bedroom folk tracks since. DeGroot’s vocals wrap their artfully upfront lyrics in dynamic, burnished tones that warm the listener like honest conversation with a good friend while Cox’s guitarwork blends in like a blessing. On January 26th, their folksy croons will drift out of Philly’s bedroom scene and back home to the Bay State for the Hassle’s Dreamscape 17 along with the likes of Sundog and Ther – with Visuals by Vidumami at Hope Central Church.

Boston Hassle: What came first Sadurn the band or Saturn the tattoo?

Sadurn: Haha ok here’s the story. I got the planet tattoo impulsively when the band was still called ‘veev‘… then last March I got a cease and desist from Mr. DJ Veev of Nova Scotia, and I had about a week to change my URLs and everything. I had the name Sadurn lying around from a joke band my friend and I talked about starting, and I was out of ideas so I just went with that. Somehow one thoughtless decision plus another has resulted in what appears to be a weird cohesive branding or at least a meaningful act of self expression… but in fact it’s pretty silly and meaningless.

BH: Why are you making music?

Sadurn: Making music… Sometimes you wake up with a stinky feeling, a big sad feeling or you just feel embarrassed. Making music helps me acknowledge and process that stuff, like cranking it through a machine – on the other side there’s a Thing you made that will outlast your shitty feeling and can maybe help others through the same process. 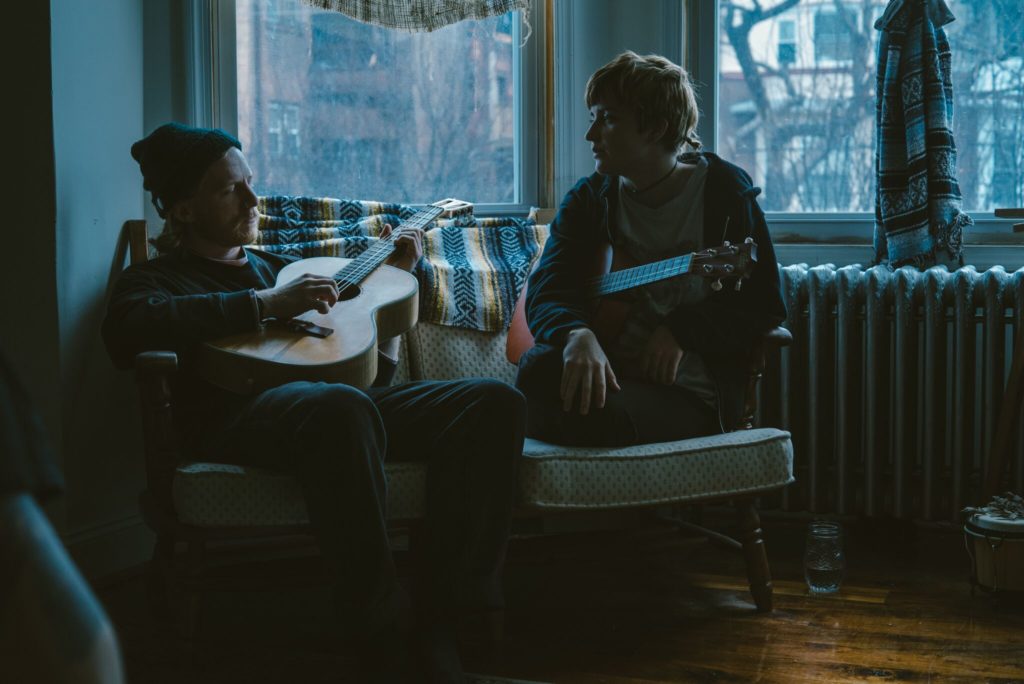 BH: How’s the transition to Philadelphia been?

Sadurn: I love Philly, I feel very blessed by all of the people I’ve met here who are creating stuff and supporting each other’s creative projects. Making music and art and jokes with friends feels more real and important than a lot of other things right now.

Things are pretty bleak and it’s scary to be a young person right now, going to some job each day can feel absurd. Focusing on making art or music could potentially feel self indulgent, but on the other hand it’s one of the best ways to be present and in tune with yourself and the friends you’re creating things with and the moment that’s unfolding.

I think the part of the music scene I’ve experienced here in Philly is characterized by mutual support rather than competition – folks really support other bands, not just their own or their close friends. There are people who are really talented musicians but also book or host or attend shows, run record labels, make gig posters and buttons and screen print shirts for other people’s projects. For instance my precious friend Andi from Ther who we’re on tour with – they are also an amazing audio engineer who has recorded/mixed/mastered stuff out of their home in West Philly for so many musicians who might never have found that opportunity otherwise. Pals helping pals is a sacred thing.

BH: Which gnome are you on the poster?

Sadurn: There are three of us on this tour, my friends Andi, Jon and myself. I made this drawing for the tour poster and for our split cassette. It’s just three weird goblins with pointy hats and they’re holding ducks and they all look the same. But for some reason each of us and various other friends independently guessed the same thing for who was which goblin – that Andi was on the left, Jon was in the middle, I was on the right. Pretty wacky. Maybe there’s something specific about how you handle a duck. 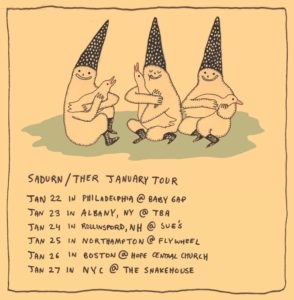 Liked it? Take a second to support Maya Detwiller on Patreon!