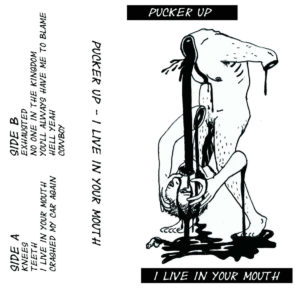 Exasperated and probably dehydrated, I Live In Your Mouth is a disjointed beast with nine pathetic, sonic limbs. It drags itself around town. It washes dishes to get by. It’s sick of problematic people. It’s the sound of release from a world of deprivation. And if not now then when?

The drab hallmarks of Pucker Up are as effective as they have been in the past – wailing clarinet lines, screeching feedback, guitar strings smacked like drums, and skeletal percussion clinking like a chain link fence in a hurricane. Nathan Ventura’s lyrics stay desperate. They’re pointed admissions of low points and a constant state of tension. Candid in the most unfortunate sense (“I’m not myself today / All them motherfuckers done had their way”), the vocals on “I Live In Your Mouth” breathe rotten air into the album’s already rotten atmosphere. The title track is one of Pucker Up’s rawest studio recordings – the percussive guitar is unbelievably distressing between Lee Haplin’s anguished marching band drum-lines.

The duo have been tweaking their sound for years. Their latest project includes a couple re-recordings of past songs. A previous version of “Hell Yeah!” was on 2015’s EMPTY AS ME, and a previous version of “Cowboy Of My Dreammzzzz” was on 2014’s Buttercup (not to be confused with “Cowboy Of Your Dreaaamz” on Ventura’s excellent 2012 solo album Asshole With A Clarinet). Pucker Up have been no-wave staples in Boston for a while now. If you haven’t listened to them yet then grab the cassette from Crass Lips Records:

Liked it? Take a second to support Peter Ferris on Patreon!