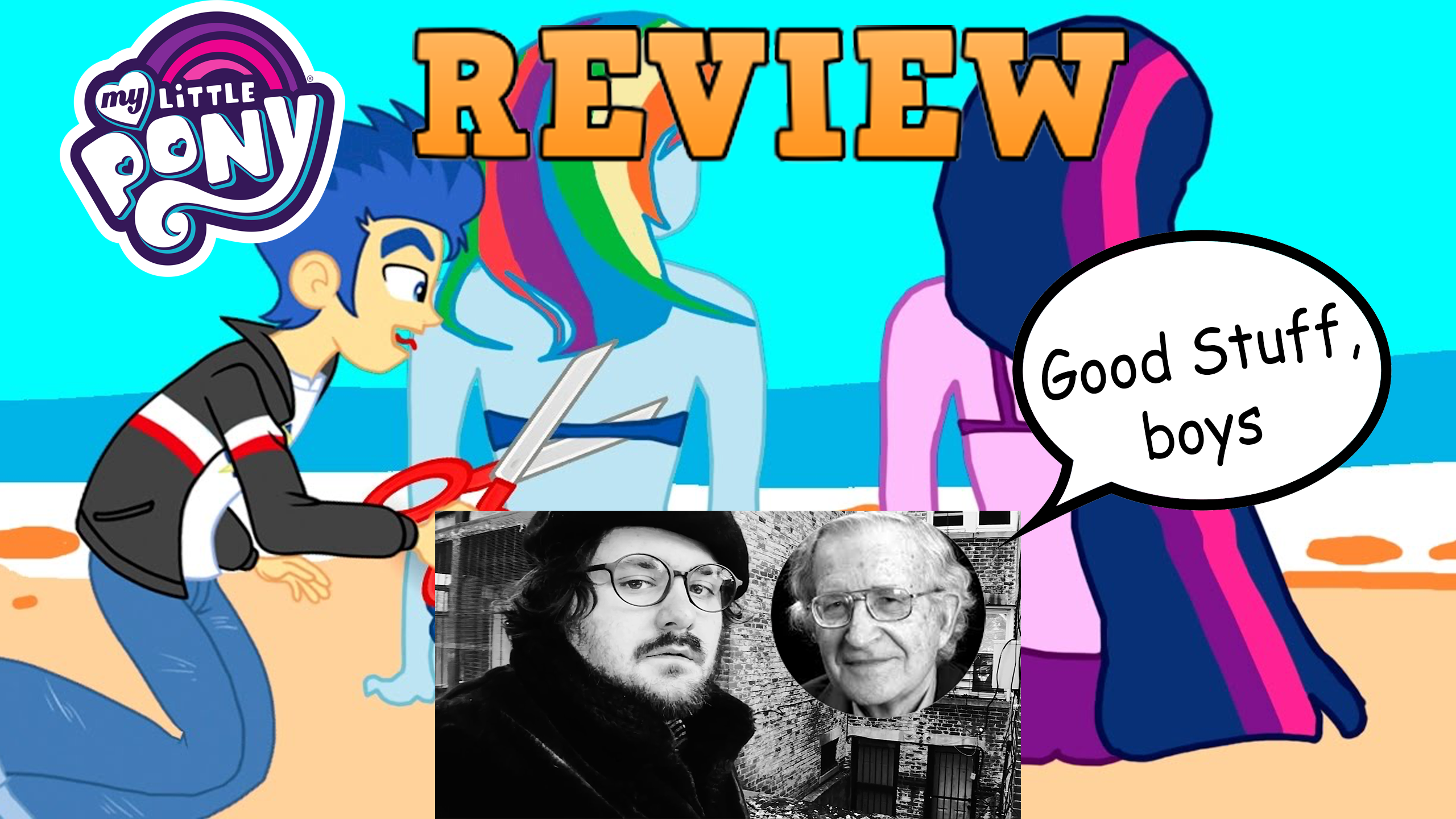 Nearly one year ago, emerging from the swamps of Allston, Massachusetts, two sentient blobs of primordial goop thought of their most brilliant idea yet. “What if we… uh… see dumb looking movies… and…. uh also… like pay for promotional tie-ins.” With the swiftness of a judge’s hammer, The Promotion Pal’s editor approved the idea and ever since…

Well, The Promotion Pals have had their hardships. A failed ARG. Trouble securing outside interest. And only two posted comments. Not to mention the fact that what should have been a Million Dollar Idea, has now lost them money likely in the Hundreds of Dollars.

Yet, they persevered. And now, on the dawn of the First Anniversary, they have decided to watch their most harrowing film yet. The My Little Pony movie.

Our promotion of choice was completely devoid of relevance to the My Little Pony Movie. Instead, in an act of sarcastic non-celebration, we would line up to try McDonald’s revived Szechuan Sauce — a dipping sauce made to market Mulan in the 1990s, forced into resurrection by hordes of Redditors and 4Channers who have become rabid for the teriyaki-barbeque blend ever since it was referenced on Adult Swim’s Rick and Morty program. (Full disclosure: The Promotion Pals watch Rick and Morty — they are however critical of the fanbase).

Upon arrival (half-an-hour before the debut of the product — shortly after we got out of our Blade Runner 2049 screening) it became immediately apparent that we would never get to see our dumb little joke blossom into fruition. The line ran down the block and then some — by our count roughly four hundred persons (mostly white males wearing Rick and Morty t-shirts). The Promotion Pals were for the first time… promotionless.

We hung our heads and proceeded to Popeye’s chicken. Even here the line was nearly out the door — overfill from rejected fools such as ourselves.

Perhaps the singular silver lining of this tragic tale of woe is that Popeye’s was very good.

Or as Little Nicky said: 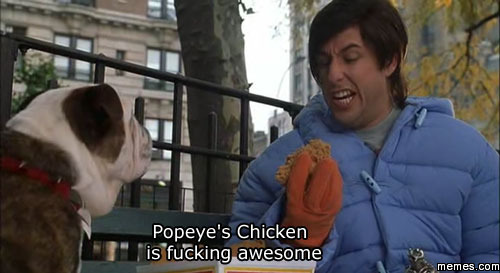 Logan: The movie was okay. It was a children’s feature that was unremarkable. I have almost no further comments.

Andy: Yeah. I mean, I think it would have been more enjoyable if we were in the target demographic, but, unfortunately, this is one children’s feature that does not try to appeal to an older audience in the slightest. Thankfully, we did not pay traditional admission to see this film. We, uh… found a way around that.

Logan: I honestly don’t want to say anything else…

Andy: I guess, for the sake of someone who might be following our pieces, I’ll try to say some things about this. Liev Schreiber plays The Storm King, a new addition to the My Little Pony-verse who brings a high stakes conflict to their world. It’s pretty clear, from an animating standpoint, that there was almost no effort put into changing or updating the core cast of the film (a collection of equestrian fellows I am not familiar with, but have only seen in the bowels of DeviantArt) to meet any higher standard a feature film might yield. Instead, all detail and design is put into characters like Liev’s King or Emily Blunt’s Tempest Shadow. Which honestly makes this feel like a last minute upgrade to what should have been a direct to DVD release 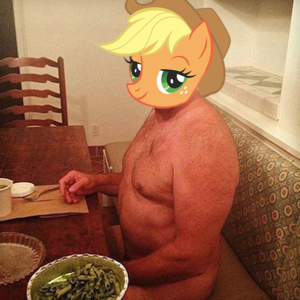 Logan: Pop star Sia is in the movie. She plays a horse whose face is obscured by Sia’s signature hair cut. There is a big pop number. We all dance… Most of my thoughts during the movie were over my continuing confusion as to why this show has such a large adult following. I will say that this version of MLP does care about telling stories, unlike the original show… but like… it’s not that great? Is it merely nostalgia for the original product fueling them? Some sort of equine lust? The mind shudders at the thought.

Andy: Yeah, I don’t really see the appeal of MLP as an adult. I understand there are people who, uh… are inclined to think these ponies are something beyond their creator’s intent. But subjecting yourself to something so clearly designed for a kid seeking mind-numbing entertainment is painful to say the least. This feels like a film you’d see coming out of McDonald’s coveted VHS collection or something a parent would put on in the background of a slumber party you’re forced to go to at a family friend’s house.

Logan: I’m still just hung up on the adult viewership. I mean, it’s cute and friendly and harmless and that’s all well and good. But why so many adults? My final conclusion is that the movie isn’t bad, just not that good either. Kids will like it. It’s not insufferable or culture-damaging like The Emoji Movie. But it’s not nearly as entertaining or funny as even middling Promo Pals fare such as Boss Baby. I give it Three Promotional Tie Ins out of Five.

Andy: Yeah, there isn’t much to say here. I’m sorry if you came looking for some momentous fanfare to celebrate the Promo Pals one year anniversary. The My Little Pony movie was just unspectacular to say the least. Not as painful or mind melting as The Emoji Movie, but certainly not worth saying much about other than, hey, there are some weird celebrity cameos in here. The stakes were clearly raised, but the execution was lacking. I give it Two Promotional Tie Ins out of Five. Also, I give you my love, dear Reader.

Logan: Since this movie is so lacking, to the point where we find it impossible to alchemize thoughtful analyses on it from the Promo Pal Aether, we present a special PROMO PALS movie tie-in. A reflection on the emotional trauma we have endured through this year long journey:

PROMOTION PALS NOTE: We feel this deserves a meta-game moment as it were. This video took FOREVER to make and seemingly has almost no connection to this My Little Pony review, but we swear this is the genesis. Look upon our Google Doc, ye mighty, and despair: 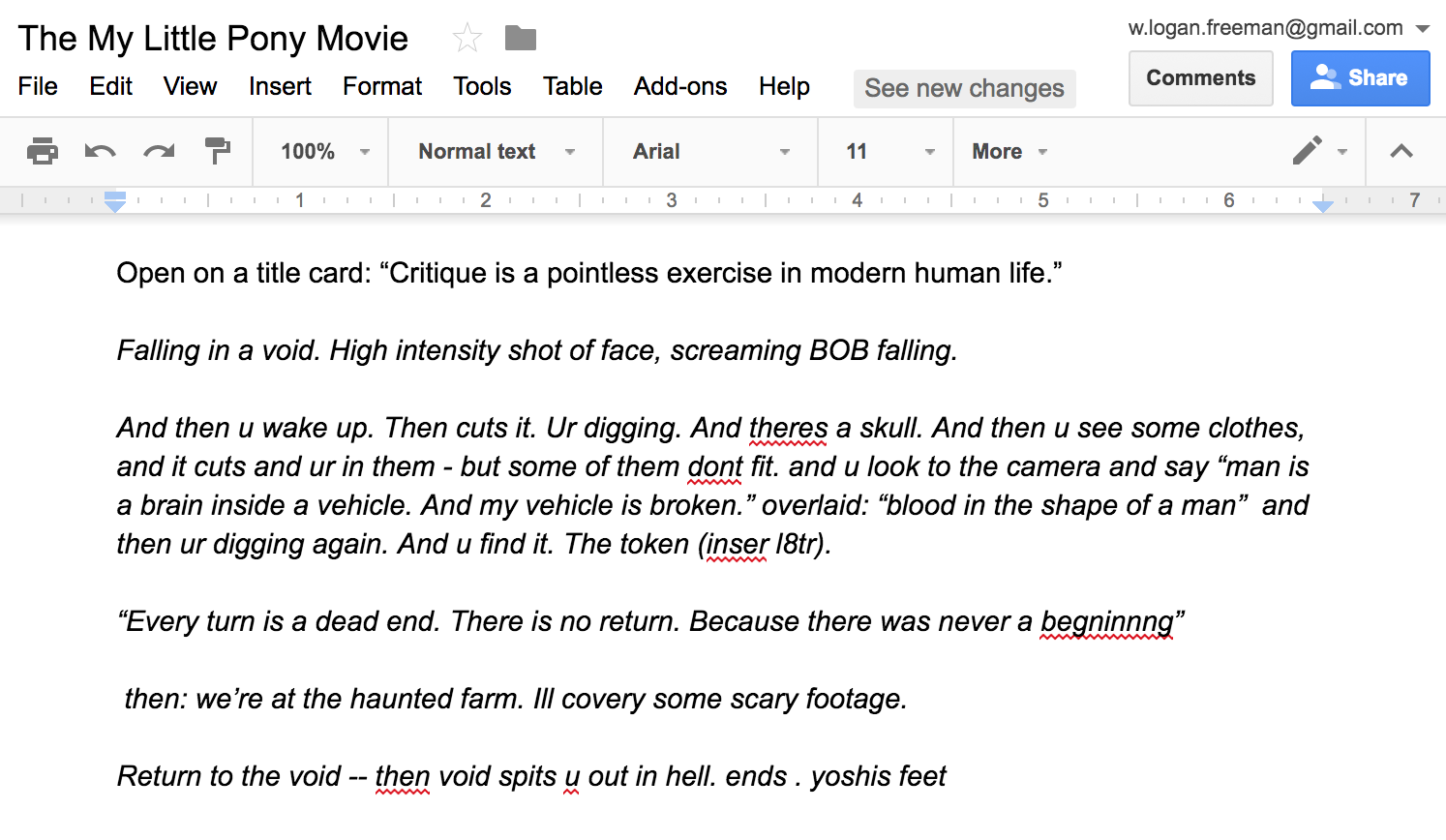 It seems the mediocrity of the movie itself propelled The Pals into a spout of creativity. Perhaps, then, this movie exists as a reminder that, if all films were great or interesting, there would be no impetus to create something better.

In their floundering, on this most auspicious of occasions, the Promotion Pals have for once found meaning in the madness.

But how many more years can they struggle onward in obscurity and poverty?

Only time will tell.