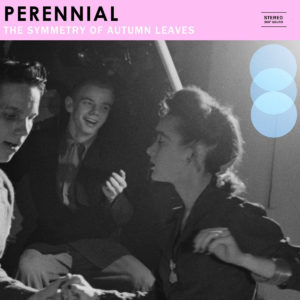 Perennial is a band dealing simultaneously in the dead and the living. Perennial plants are ones that bloom in the spring and summer and die each autumn and winter, always returning in a long-lasting cycle. This cycle of death and rebirth is found in almost every aspect of The Symmetry of Autumn Leaves, a record that uses the aesthetics of offshoot 80’s punk genres for a modern aggression. Even this inspiration for the direction of the fourteen short tracks falls under the Perennial theme. In the most apparent use of this theme, the opening and closing tracks mirror each other. The record is a loop, starting and ending with the same mess of dry, atonal saxophone that leads into a daunting d-beat pattern. The album’s tension that is surrounded by this loop refuses to fade away track after track.

The Symmetry of Autumn Leaves has an undeniably self-assured yet raw energy, much like the violence found in a battle. Lyrics are declared in shouts like a general barking orders. Riffs are stabbed out of the guitar like a sword piercing a breastplate. The keys thump like the heart of a soldier on the frontlines. This aggression is reinforced by references to architecture and mythologies. On “La Fugue Pour Béton brut,” “brutalist buildings” are lamented and drive the singer “underground.” Brutalist architecture is an expression of seriousness. It is coldness in a physical form. The song title uses the original French, béton brut, for the material of choice for brutalist buildings, raw concrete. “Raw concrete” is as violently immovable as a material can get. The lifeless concrete here contrasts the rest of the album’s focus on the natural world – leaves, evergreens, and owls all make an appearance in song titles. The militaristic aesthetic is furthered on “Hippolyta.” Hippolyta was the fierce leader of the Amazonian warriors, known for being the strongest of her soldiers. She is called to as Chad Jewett and Chelsey Hahn declare they are between dead and alive yet still present for a revolution.

The Symmetry of Autumn Leaves was released on the newly established label Howling Frequency, featuring other New England-based bands like Space Camp and Chained to the Bottom of the Ocean. Keep an eye out for their upcoming shows and listen below: