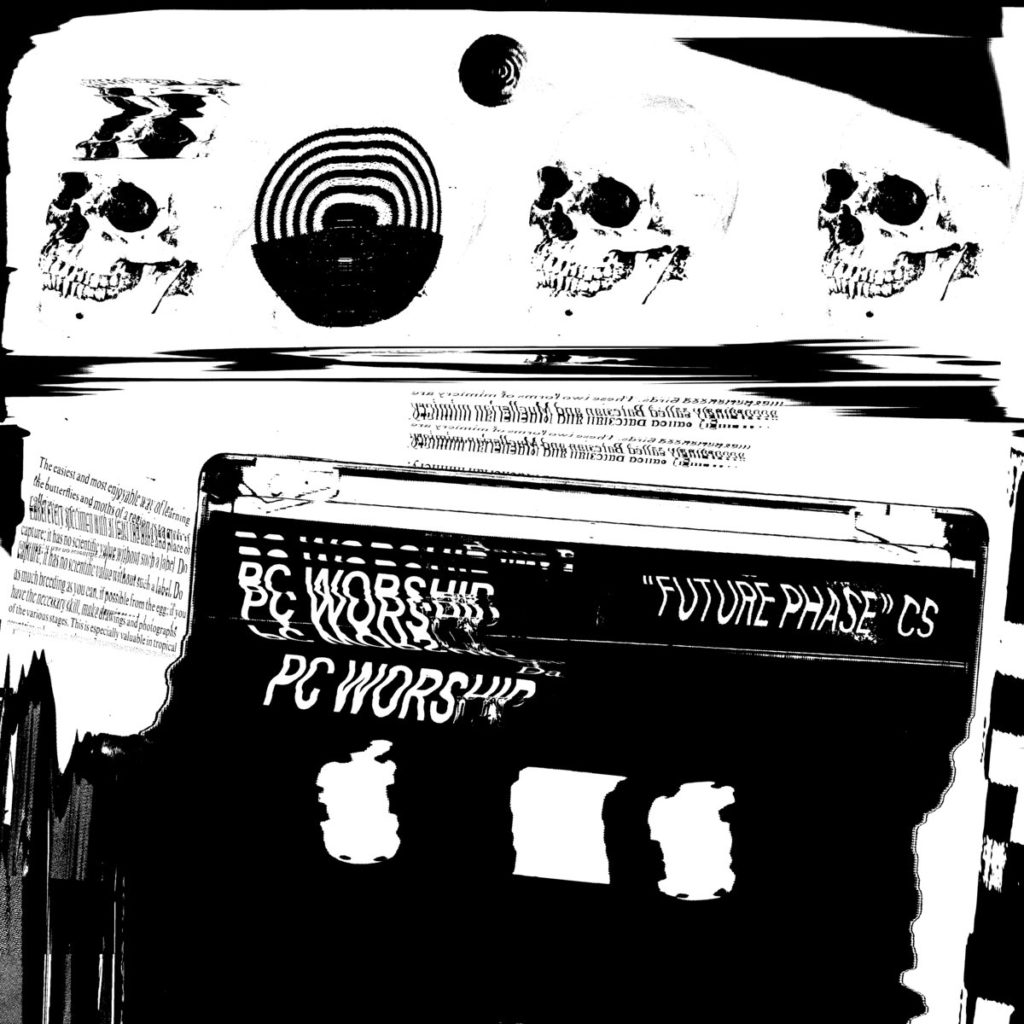 At first listen Future Phase is kind of a headbanger, placing the listener within the genius of sonic chemistry. PC Worship is obviously curated by a music lover, for people who love music. For people who talk about music, and follow music, and probably know a few bands.

PC Worship is, from its very foundation, high-minded – not so much a band as a collective that is centered around musician/visual artist Justin Frye & the collective’s use of classical instruments. Future Phase being a mixtape for Monster Children Magazine, making it a kind of multimedia exploit, is reminiscent of the days when music mags would come with their own LPs…

All that I can get into. My first hiccup came with this – the assertion that the final track is “an apathetic pop song about invisible materialism and social media’s chosen relevance to the user.” After reading that I felt myself thrust into a misdirection, an unnecessary thesis that grew to the point of overcast.

Because it surfaced questions of the weight of a name- PC Worship; What I had known as a kind of ironic and apolitical appropriation then took on a kind of grounding in commentary. It started me wondering what else I was supposed to read into – the Luddite-esque instruments: the collaged tapes, viola, upright bass…

Frye’s last release, from 2017, is called Social Rust. What I’m saying is that there’s a clear undercurrent of opinion – a kind of vague lament at modernity? The meaningful precursor to Future Phase? Pinpointing this supposed motif did nothing to strengthen my feelings about the music- if anything, it was detractive.

To be honest, I wasn’t so sure why I felt that way; experimental music is a great vessel for statement. Especially about social ills. But I’ve developed a particular toothache towards that kind of broadly-placed technoanxiety. Is it just that it’s heard too often, taken up by morning talk shows, professors, statisticians and journalists on a slow news day? Maybe. It could be that it’s unhelpful, like understanding environmentalism as only a return to the pre-industrial times. It might sound good, but it’s not getting us anywhere.

Maybe because PC Worship is situated at an apex of ‘underground’ credit and name recognition, a space earned after 9-or-so years of existence. A space of definite and particular power, and power, as they say, comes with responsibility. I can point to some-odd similar examples: Jeremy by Pearl Jam, Industrial Disease by Dire Straits, Paint a Vulgar Picture by the Smiths- but these are handled more elegantly, more pointedly, with something like a real tinge of empathy.

As for the music itself, it’s well done. It comes on slow and purposeful in Tides II, hits with a good umami, makes ambitious shifts and from song to song. It gives you a little Athens psychedelic, something that almost veers into Costal California Nuggets, but stays under a gossamer of grey-black. Shell Shower begins simply and then peels over itself, surging and layering – surf rock for a chilly day. Future Phase enjoys its bait-and-switches – moments of music fade-out preceding an even-stronger reentry. Former Feedback, unsurprisingly, begins with a moody dose of electrical scratchings, chaperoned by an emboldening guitar reverb. A pause, an then hasty entry on instruments.

But at some point the initial effect starts to wear off and some of the defining elements get repetitive. By the fruition of the chords in Former Feedback I almost felt as if I was listening to something else, or a lot of other things, pressed into a kind of Soylent Green. The instruments are ballooning into the space over an over, respiring the same air. The pauses seem pretensions. Amongst music that is clearly of very precise construction, the ambling, affected vocals sound awkward and unintegrated.

I wish I had heard Future Phase as a cassette, its intended form, and had to go through the labor of flipping over the object, closing the escapement and pressing play once again, catalyzing that B side. This would have added to my experience. I wish I had listened while I cut my hair or tenderized some meat

Liked it? Take a second to support Dana Burns on Patreon!