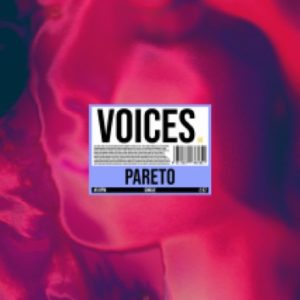 You’ve definitely heard it before, and yet you probably can’t explain what it is or where it comes from. Psychologists refer to it as our subconscious, but you’ll hear many people describe it as a little voice they hear in their head when faced with a compromising situation or difficult decision. The film industry often portrays subconsciousness through imagery of the “devil and angel” on each of your shoulders, but in reality we know it is far more complex and intricate than a simple duality. Massachusetts-based artist Pareto attempts to analyze his own subconscious with his latest single “Voices,” as he navigates how to handle a difficult long-term relationship falling apart at the seams, resulting in his most personal song to date.

“Voices” acts as the second single from Pareto’s upcoming debut EP Generation of Desolation. As a young, upcoming artist rooted in lo-fi alternative hip-hop influences, listeners will be surprised by the maturity in his songwriting and overall sound. Backed by stark drums and hi-hats, paired with a beautifully colorful palette of piano chords, Pareto begins by conveying the contradictory nature of his feelings towards a significant other. He utilizes numerous double entendres to convey the difficulty of their long-distance relationship, first claiming he wishes she could see what she “means to [him]” as well as “how bad [he] bleeds when [she’s] mean to [him].” Their recognition of the difficult situation doesn’t prevent her from expressing frustration towards him at times, creating a further barrier between them.

Pareto, however, is not blameless for his own actions either; he acknowledges he often finds himself turning to alcohol and partying to cope and even avoid discussing the situation altogether. Whenever she wants to talk about their relationship, he seemingly attempts to deflect, indicative of lines such as “let’s talk about it in the morning / I’ve been drunk so won’t remember why you’re calling.” As a result, he senses her ever-growing resentment. Pareto’s self-awareness of the part he plays in the fallacies of their relationship is what makes the song all the more touching and relatable.

However, Pareto realizes the antithetical emotions he’s enduring throughout the track. He parallels yet another double entendre, this time with “voices.” On one hand, the voices signify those inside his head that are filled with overcomplacency, which in turn are negatively impacting his ability to navigate the relationship. In contrast, he often speaks fondly of her voice throughout the song: “the sound of your voice brings a glow to my face,” a recognition of the desire to hold on to this person because she still brings him hope and joy despite the hardships they inevitably face.

The song ends with a melodically delivered outro, as Pareto croons bars that reflect their inability to come to a resolution, ending with the sentiment that they’ll simply “let it play out.” There’s a sense of both parties lacking control over the situation, and yet neither one is strong enough to take control to either end the relationship, or fight to truly make it work, leaving them in an uncomfortable state of ambiguity.

“Voices” is painfully honest and deeply layered in both its lyrics and instrumental, making for one of the more introspective releases in Massachusetts so far this year.

Stream “Voices” on all platforms:

“Voices” by Pareto on Spotify

“Voices” by Pareto on Apple Music