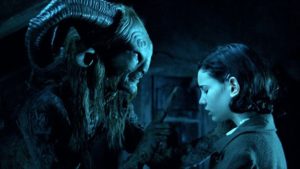 Pan’s Labyrinth, or El Laberinto del Fauno, takes place in the turbulent, post-Civil War 1944 of Francoist Spain. The film tells the story of a young girl, Ofelia (Ivana Baquero), who travels with her ill and pregnant mother, Carmen (Ariadna Gil), to live at a mill with her new, cruel stepfather, Captain Vidal (Sergi López). While trying to understand and cope with the tragic world around her as World War II rages on, Ofelia discovers and enters an ancient labyrinth in the woods in the back of the mill. There, she meets the Faun (frequent del Toro collaborator Doug Jones). He is an old, moss-covered, horned creature who tells her that she is a princess from another realm. He tells her that she may escape the unhappy world around her, and return to her kingdom where her real father awaits her. He says she may return, but only by giving her the duty to complete three tasks before the moon is full.

The film is a fairy tale for grown-ups, a spellbinding and heartbreaking story brimming with grief, sorrow and magic. It’s about the loss of childhood and its wonder. It’s about the epiphany we have when we grow older and realize the world outside our imaginations in childhood are much darker than we thought.