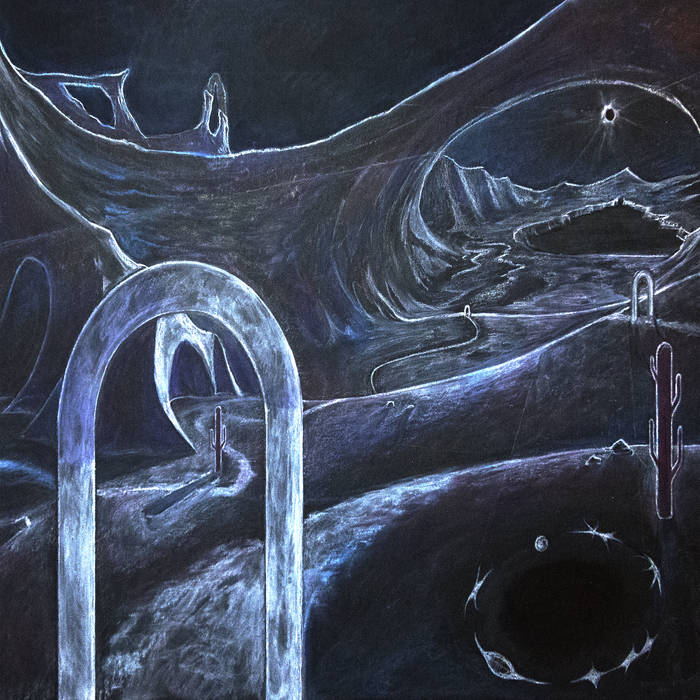 There’s something about those words when you put them together. Solo project. It just gives me the skin crawls. So many times, very talented musicians have combined these words to put out records that are the worst kinds of self indulgence. Great drummers playing mediocre guitar, great singers writing bad songs, great guitarists noodling for a half hour over a half-assed arrangements of other instruments. Despite OVERCALC being a solo project from Nick Skrobitsz, the gutarist / singer for Multicult, the Wayward, Carrion and Mormon Warlord and the drummer for Lady Piss, it’s never been labeled as a solo project and for good reason as this album is anything but self indulgent.

The first track “Sire Complex Shapes”  opens up with a soundscape straight out of a good John Carpenter movie. The first ten second of every track seem to set the stage for what is to come creating a dystopian atmosphere from which beats rise. Why does it feel post apocalyptic? Is it just because many of the best of those movies come from the 70-80s where this music has its roots? I dunno but after that stage is set, a whirl of beats is suddenly laid down and a jagged synth melody jumps in acting as a percussive element. It tells you “that’s what’s up and you can either get on this train or pop off, asshole!” Once that base lays down the groove, layer upon later of syncopated sound is built upon it as different instruments filter in and out. It would be easy to  start these songs off with a simple melody and it would make this building that happens later easier but each beat and foundation of the song is already a complex structure from the get go. It’s what makes it so fascinating as it keeps building and you get to see how many different layers of complexity can be fit on top of it. It’s a game of Jenga that never topples over as the moment you feel like ok, this is crazy enough, layers are taken or given.

The drums, and synth all have an 80s harshness to them but it feels anything but dated. It feels distinctly modern while calling back to the fertile ground of industrial and prog music of the 70s and 80s. You can as easily compare it to Goblin as you can to Horse Lord. The live guitar is used sparsely and it then cuts through often at the crescendo of a song. It’s a great added bonus to have those kind of guitar skills in your back pocket to just pull out and bring something new into the equation when you need it. The key here is that for the most part they’re not used as the meat and potatoes of the song, but just the icing on those meat and potatoes (solid lunch, if you’ve never tried. I swear it’s not just a mixed metaphor).

“Coursing Night Photon” leans more into the atmospheric side of the music. The choppy patterning of the synth line acts as a bit of a beat here, as there’s no drum track, but it’s at such a high rate of speed that it blurs together. Basically, you’re going to stare at the cracks in your ceiling to this one more than nod your head. The climb of the initial synth line continues throughout as each layer is piled upon it with harsher and harsher discordant sounds before it finally drops off. These songs really do transport you to landscapes and it’s not just the lack of vocals that make them feel very cinematic. They feel like a lost soundtrack to a great movie.

There are some really great songs in here like “Neuroskeletal Projectile” and “Arid Crime” but it all culminates in the 17+ minute long opus that is “Bent Star”. With most other songs on the album ranging from 3-5 minute range, they serve to wet your appetite. By the time you reach this far in the album, your head is nodding, your toes are tapping, you’ve put on your favorite Snake Pliskin eye patch and you’re ready for what comes next. In this longer format, Mr. Skrobitsz is really able to let all of these elements he’s been working with breath. I mean, a short song can be great for keeping yourself succinct but nothing makes you raise your fist to the sky quite like a long build. This music sounds nothing like Mogwai, HOWEVER, in the same way that Mogwai built intensity in songs, OVERCALC builds complexity. Here in 17 minutes where it can really take shape, the guitar work is in some sort of other astral plane of existence. over the course of the song, he’s making sounds with those strings that don’t even seem possible.

Nick Skrobitsz uses his honed skills of playing real world instrumentation to create these digital songs that feel lived in, in a way that most don’t. Could he have gotten there if he had started in digital only song writing? I’m not sure but every piece of these songs (and there are a lot of pieces) feels like flesh and blood and that is the element that connects them to the earlier digital songs of Krautrock, Industrial and late Prog.  Him bringing his more modern influences and sounds are what separates this music from that but it feels more grounded than most modern electronic offerings. The whole record sounds like the culmination of 20+ years of hard work and musical servitude and that essence emerges in every piece of this audio puzzle. I straight up loved this album and where it took me. I hope someone turns this into a movie and keeps the song titles as dvd chapters because I really want to see the scene that would be made about Arid Crime. My advice? BUY THIS ONE. Enrich your life.

Lauren Tosswill is the curious performer playing on Boston Hassle’s Instagram Live on 7/26.