Earlier this month, Morrissey cancelled the remainder of his US tour while simultaneously releasing his rankings for the fifteen best audiences at his shows in 2016. What struck me more than the rather predictable tour cancellation was the relevancy of his audience rankings—a crowd can truly make or break a show. As I’ve gone to more and more shows over the past few years, I’ve discovered that concert-goers are strikingly similar to apples, namely one can spoil the whole bunch (or rather the entire experience) by being an asshole. It’s true that in a scenario where a bad apple is present, the music can still be incredible, and sometimes it’s entirely possible to ignore the bothersome fan altogether, and everything is fine. But occasionally there’s someone so hell-bent on being the most obnoxious human in the venue, that it leaves a bit of a blemish on your memory of a show. On the other hand, a friendly, accepting, respectful, but still passionate crowd can transform a show into a near spiritual experience. Seeing as I’ve encountered an array of crowds from both ends of the spectrum and also strive eternally to be more like Moz each year, I thought it would be fitting that I compile a list of my favorite crowds at shows I’ve been to in this (for better of for worse) hell of a year. 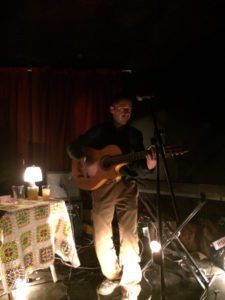 The Juan duo drew a fair crowd that huddled together on that chilly Sunday in February. It’s hard to pinpoint a particular reason why these people were particularly pleasant to be enjoying the Juans’ music with, but perhaps it was the intimate and personal interactions between the crowd and the musicians. Locals were there to enthusiastically support Boston’s own, Andy Sadoway and BEEEF, and they were just as excited when Tall Juan put on a show characterized by pure rock ‘n’ roll energy. When Juan Wauters took the stage, he listened to fans’ requests as they called out for him to play one of his more popular tunes, “Sanity or Not.” But the defining moment of the night was when Wauters played the ever-so heartwarming/heartbreaking “Woodside, Queens.” The quiet acoustic ballad was supplemented by the voices of the crowd as they whispered the lyrics back to Wauters, as if not to break the spell he was casting over the tiny pub that night. It was one of those life-affirming moments that also makes you have a little faith in humanity somehow. Everyone was there to just simply experience the music, and it had a noticeably charming effect. 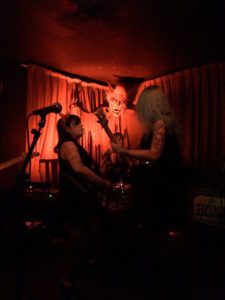 It’s hard to get a crowd out to O’Brien’s on a Tuesday night, but those who did come out to be a part of the sparse but passionate audience experienced rock ‘n’ roll in its rawest, purest form. Something that made this crowd standout was that Death Valley Girls composed a portion of it as they stood up front bouncing and dancing to GYMSHORTS’ explosive set. The band’s support and belief in rock set a precedent for the night, and each person in O’Brien’s made sure to maintain that energy as Death Valley Girls took the stage. Everyone was aware that the pub was almost uncomfortably empty, but they rejected the awkwardness and let the sweetly satanic beats of Death Valley Girls course through them. It was as if the band had put the crowd under a spell; each person mirrored frontwoman Bonnie Bloomgarden’s lust for life and channeled it into an infectious and enjoyable feel-good energy.

The reason for this crowd being so great is pretty self-explanatory; they sold out Brighton Music Hall in order to support an entirely local bill. If the packed venue wasn’t enough to impress, the variety in fans certainly could. There was a twelve-year-old boy next to me with his dad up front, college kids, teens, middle-aged locals, and everyone in between and beyond. No matter the age, everyone who came out was there to genuinely support some of Boston’s best, and that in itself was pretty special and memorable. 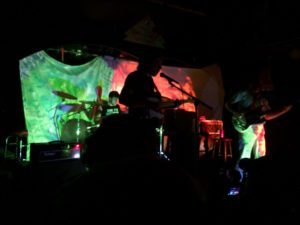 This show had a similar story to Vundabar’s in the sense that the people that came out were there to support some of their local favorites. The show was originally supposed to be the Televibes’ goodbye show before they moved to Austin, Texas, but instead it became a celebration of them not making the move after all. It was like one massive sigh of relief that the Boston psych rock icons were here to stay. The result was a show that, besides having a mind-blowing, life-altering line-up, was more of a get-together among friends than a gig. Boston’s music community could be seen in action as Peter Colpack manned the psychedelic visuals and the Televibes played to a devoted crowd that was mesmerized and yet enlivened by the band’s set. As a rule of thumb, any crowd composed of Boston’s music community is fairly unbeatable. 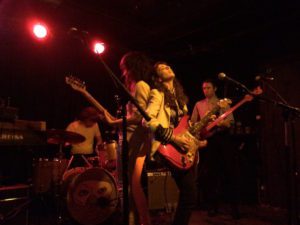 Those Darlins stopped in Boston on their farewell tour, putting the project to a bittersweet end. Even I, who had just been getting into Those Darlins in the past year, could feel that the show was somewhat of a funeral. Everyone who came out was in mourning, but they cast their sadness aside in order to celebrate the life of truly killer band. The show had a relaxed form; besides the first few songs, the rest of Those Darlins’ set was entirely request-based, making the show even more personal that it already was in the intimate venue. The crowd paid their final respects by passionately embracing each and every song played by the band, and expressing their love and gratitude to Those Darlins for gracing the world with their distinctly brilliant music.

Okay, so maybe I’m a little partial to this one considering I got to see one of my all time favorite bands headline my all time favorite venue, but the crowd stood out too. It’s always a bit questionable when a slightly “bigger” band rolls through town, because sometimes it seems as if the show gives fans an excuse to act ridiculously disruptive in every way, shape, and form. Fortunately, (with the exception of a few people) that wasn’t really the case with this show from what I experienced. But what struck me about this crowd in fact wasn’t the crowd’s behavior as a whole, but rather people I had singled out when looking around. By the side of the stage was two younger men and a younger woman just smiling and laughing at the pure chaos that The Orwells spurred with their music and their amusing rock star attitude. In the corner of the venue was an older man with graying hair and a full beard looking on as these twenty-somethings tore through a striking, sweaty set. I mean, that’s kind of kickass, no? I can only hope to be an old woman cool enough to be checking out rock shows at that age. For me, that show exemplified how rock ‘n’ roll can bring people together, as corny and cliché as that sounds. It was simultaneously heartwarming and face-melting, which is a surprisingly agreeable combination.

I hate to be negative, but I feel it’s also appropriate to point out some honorable mentions for worst crowds of 2016, including but not limited to The Wombats @ Port City Music Hall (since when were frat guys into indie pop?), Built to Spill: Night 1 @ Paradise Rock Club (a drunken brawl nearly broke out before the show even started), and Jake Bugg @ The Royale (special shout out to the 60-year-old man urging me and others to “smile!”)

Otherwise, 2016 was a not-too-shabby year for shows and their accompanying crowds. And if you decide to go out to some inevitably killer shows in Boston in 2017, just remember: be cool and don’t be the bad apple!