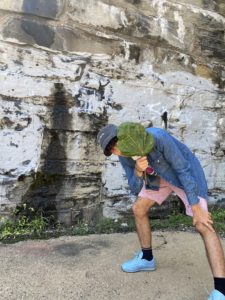 Mark your calendars, Philly-based artist OJ Mountain is gearing up to release his first album, Sloppy Optimism, on October 15. Previously releasing music under the alias “OS”, Boston native, 22 year old musician Oscar Thaler shifts from his former brand as he polishes his sound and style, emerging into a new era. I had the pleasure of virtually sitting down and chatting with the rapping saxophonist about his upcoming album release, bucket hats, collages, and his musical influences.

Sloppy Optimism, Thaler’s debut album as OJ Mountain, will include old tracks from the artist as well as new compositions. The songs featuring his previous alias are set to feature OS on major streaming, paying homage to that era of his artistry and also connecting his musical profiles.

In the past year OJ has paid particular attention to his brand as an artist, and aligning this with his statement of authentic individuality. Part of his branding includes the  incorporation of collages into his album art. He enjoys collaging as a medium that shows how taking small pieces of beautiful things from different places creates a unique and aesthetic whole. This philosophy coincides perfectly with the art and music Oscar produces, while reflecting  his versatile sound:a product of being influenced by different genres.

On September 3rd, OJ Mountain released a single from the album entitled “Either Way.” Featuring a hypnotic guitar riff, the smoothest saxophone solo you’ve heard in a long time, dreamy melodies, and a flow that makes you feel like you’re floating on a cloud, the sky is truly the the limit for OJ Mountain. Throughout his music career, Oscar has proven to be an incredibly versatile MC, and certainly no one trick pony. Recent releases spotlight his saxophone skills and incorporation of stylistic influences of jazz into his music.

OJ’s heavy old-school hip hop and jazz influence with new age style sewn together seamlessly with intricate lyricism and immaculate flow, is something you do not want to miss. If OJ Mountain isn’t already on your radar, he should be.